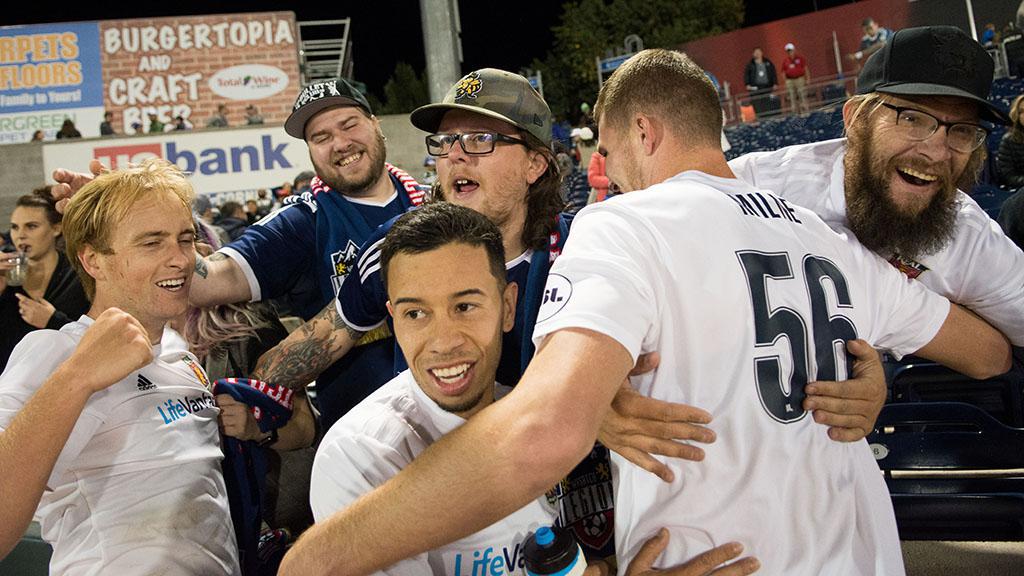 Sunday was cutdown day in the race for the 2017 USL Cup Playoffs, as the three results in the Eastern and Western Conferences left six teams out in the cold when it came to their playoff pursuits. As the race to see which teams will be left standing in two weeks continued, though, the first silverware of the season came within reach of Real Monarchs SLC, and the No. 1 seed in the Eastern Conference was gained by Louisville City FC. There are 35 games to go in the regular season – 50 until a champion is crowned – and eight places still up for grabs among 11 teams.

1. ASCENDING THE THRONE: A week ago, Real Monarchs SLC’s four-game winless streak gave others a glimmer of hope that the race for the USL Regular Season Championship might still be on. Following the Monarchs’ pair of road victories against Sacramento Republic FC and Reno 1868 FC in the past week, the door is closed on all-but-one of the potential contenders. The Monarchs’ execution in front of goal was key to both wins as Juan Mare and Chandler Hoffman struck in both contests, but the biggest plaudits should be saved for goalkeeper Andrew Putna, whose pair of shutouts – and two penalty-kicks saves – saw the rookie come through in just his second and third starts of the season for the side. Real is now a point away from its first silverware and ensuring the road to the 2017 USL Cup Final goes through Rio Tinto Stadium.

2. MISSED IT BY THAT MUCH: Of all the games for Reno 1868 FC’s attack to misfire, Saturday’s against the Monarchs was the one it could least afford, as its bid for the Regular Season Championship came to an end. Now 1868 FC will face a fight for holding onto the No. 2 seed in the Western Conference, with both the Swope Park Rangers and San Antonio FC – which holds a game in hand – level on points going into Week 29. While the absence of Dane Kelly could be pointed to in Saturday’s result – omitting the fact that the Jamaican is two-for-five from the penalty spot this season himself – there were plenty of other moments that Reno’s normally-reliable finishers could have taken. Instead, it was the Monarchs’ clinical finishing that allowed the visitors to make the final score more lopsided than the game proved overall. 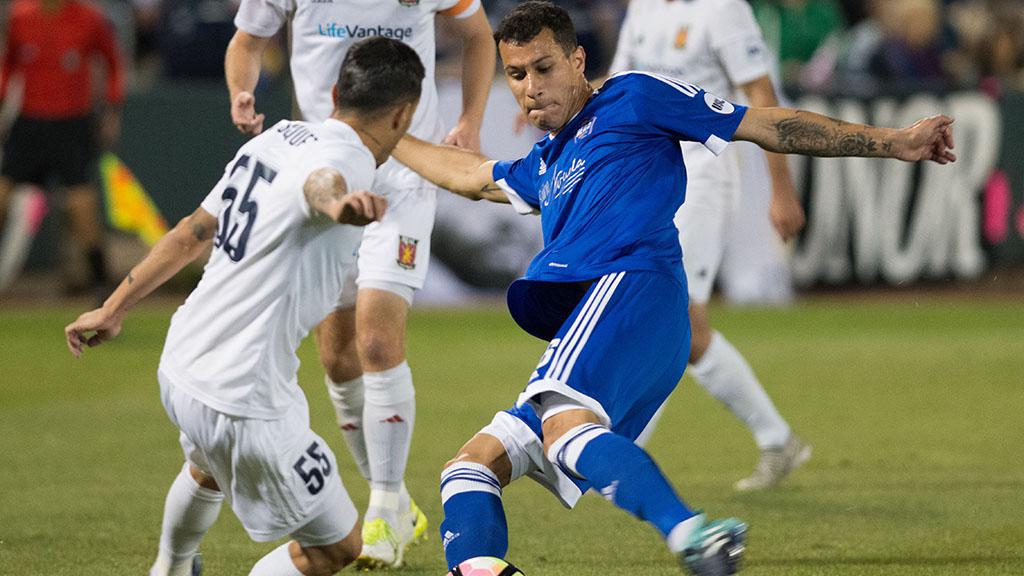 3. MAN OF THE HOUR: If the iconic figure for Sacramento Republic FC’s first two seasons was Rodrigo Lopez, there can be no question as to which player has assumed that mantle over the past two years. On Saturday night, Emrah Klimenta further burnished his reputation as the player to count on for Republic FC, as he led the side to an essential 2-0 victory against Phoenix Rising FC that put Sacramento back on track for a fourth consecutive trip to the postseason. Klimenta’s second-half free kick broke a remarkable four-game shutout streak for Rising FC goalkeeper Josh Cohen and had to be every bit as good as it was to do so. There are numerous other keys to Republic FC making a run at its second USL Cup later this month, but Klimenta will be the one leading the way should it do so.

4. END OF THE ROAD: Phoenix Rising FC’s loss in Sacramento brought an end to the club’s four-game road trip in disappointing fashion, but the side’s club record 11-game undefeated streak should still serve as a motion of intent as to what this side means to bring to its first trip to the postseason. From Jason Johnson’s goal-scoring production and the resurgence of Alessandro Riggi to the defensive resilience the side has shown over the past two months, Rising FC might be disappointed its run has come to an end. It will be eager, though, to get back onto the field on Wednesday night to regain its momentum.

5. BACKUP PLAN: There were going to be changes in San Antonio FC’s back line on Saturday night, as it visited Tulsa Roughnecks FC given the suspensions to Ben Newnam and Stephen McCarthy, but with the added absence of Sebastien Ibeagha in the starting lineup, the side was missing a combined 71 starts at ONEOK Field. It proved to be of little matter to the side, which put in a typically resilient performance to allow goalkeeper Diego Restrepo to pick up his 12th shutout of the season in the 2-0 win. San Antonio now has a path to the No. 2 seed in the Western Conference thanks to Reno’s defeat and the Swope Park Rangers’ draw on Saturday, and it looks to have the depth to be a challenge for anyone when the postseason arrives. 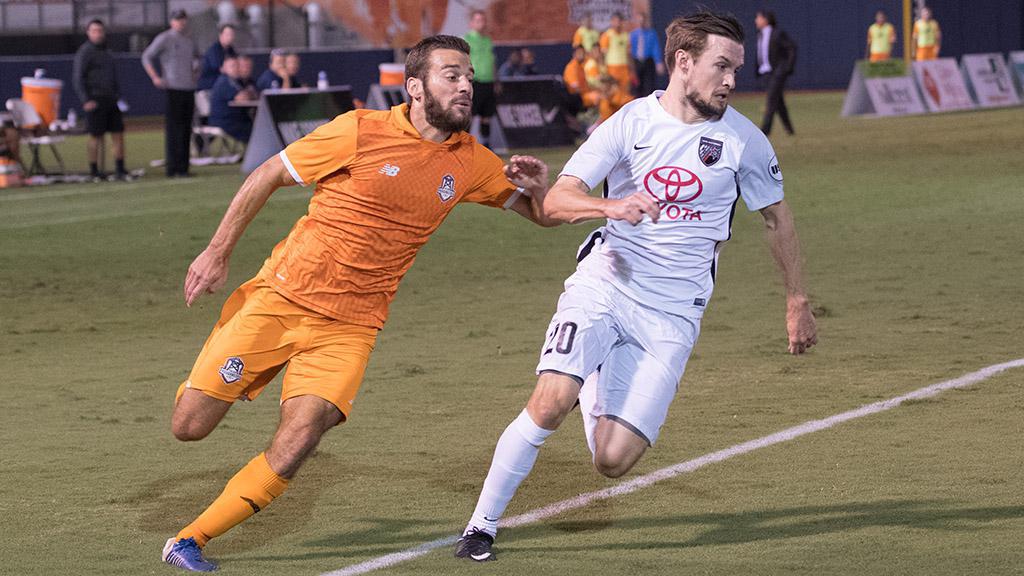 6. LOOKING OUT FOR NO. 1: It didn’t come in the manner Louisville City FC had hoped for – via the Charleston Battery’s draw against Ottawa FC on Sunday rather than a win of its own in Rochester on Saturday night – but there was still plenty of celebration for the club and its fans upon the garnering of the No. 1 seed in the USL Eastern Conference for the upcoming postseason, and rightly so. Louisville’s consistency at both ends of the field this season has seen the club rank in the top five of both goals scored and goals conceded, a claim that only Real Monarchs SLC can otherwise make, and will mean any team that has to visit Slugger Field will have its work cut out for it to deny Louisville from going one step further than in its first two trips to the postseason.

7. COMING UP CLUTCH: Given everything that had transpired this season, particularly during FC Cincinnati’s run to the Semifinals of the 2017 Lamar Hunt U.S. Open Cup, it might come as a surprise that FCC goalkeeper Mitch Hildebrandt had only saved two of the nine penalty kicks he had faced this regular season. With his side facing the possibility of once again dropping points in its pursuit of the playoffs on Friday night against the Charlotte Independence, though, Hildebrandt came through to earn a vital 1-0 win to remain just above the fray in the race for the playoffs. Cincinnati remains in a fight for a playoff place, especially given results elsewhere this weekend, but the light at the end of the tunnel is certainly brighter now.

8. CHARGING AHEAD: The New York Red Bulls II have had to fight for their return to the playoffs and still have a tricky road ahead to close out the regular season, but a fifth consecutive home victory to close out the club’s first season at MSU Soccer Park showed the side is closer than ever to the type of form that earned it a title last year. New York has scored at least two goals in six consecutive games after its 2-0 win against the Pittsburgh Riverhounds – a result that helped eliminate the Riverhounds from playoff contention on Sunday – and in the likes of Stefano Bonomo, Junior Flemmings and Florian Valot, they have the firepower needed to compete with anyone should it clinch a postseason berth.

9. CLOSER AND CLOSER: The Red Bulls II’s visit to face the Tampa Bay Rowdies on Wednesday night should be a must-see, with the Rowdies looking to sew up their playoff place and push toward second place in the Eastern Conference with a win. Tampa Bay’s 1-1 draw against Bethlehem Steel FC offered some frustration as the side’s lack of accuracy in its finishing saw much of its good pressure go wanting. Thanks to Sebastian Guenzatti’s equalizer, though, the host managed to salvage a point from the back end of its home-and-home series with Bethlehem to keep its path to a top-two finish alive. 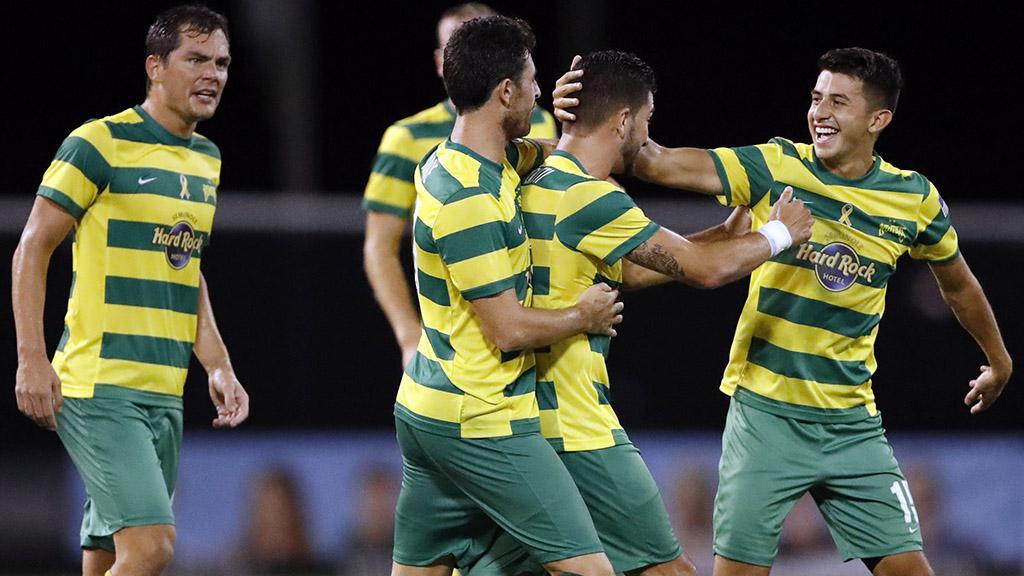 10. ROAD WARRIORS: As far as the numbers go, the teams that sit toward the top of the leaders in road wins this season are also the ones that are in contention for a high finish in the Eastern or Western Conference standings. Then, there’s Orlando City B, which has relied upon its ability to take victory on the road to fuel its pursuit of a second consecutive trip to the playoffs. OCB’s seventh victory away from Orlando City Stadium came on Sunday evening, as Hadji Barry’s winner earned a 1-0 victory against the Richmond Kickers and kept the side above the red line in the Eastern Conference. The pressure remains on, especially with two home games to close out the season that begin with a visit from the New York Red Bulls II on Saturday, but the ability the side has shown to rise to a challenge shouldn’t be discounted.

11. COVERING THE ANGLES: There remains work to be done for OKC Energy FC, but after this weekend’s results, it’s difficult to see the Western Conference Playoffs opening up without Head Coach Jimmy Nielsen’s side as part of the field. After Colorado Springs Switchbacks FC opened the door for Energy FC to pad its lead in the race for the playoffs through the Switchbacks’ 2-1 victory against Orange County SC, OKC played its part in a comprehensive 3-0 win on Sunday evening. Should things fall Energy FC’s way, it could have sealed a place in the playoffs by this time next week, and potentially cause some headaches when they get there.