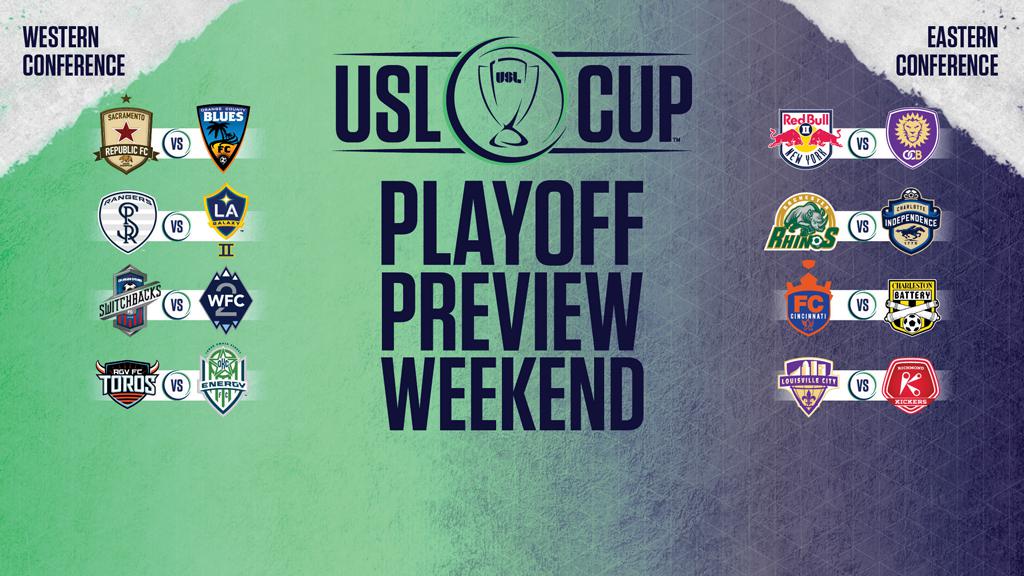 TAMPA, Fla. – The 2016 USL Cup Playoffs kick off this weekend with the Eastern and Western Conference Quarterfinals, as the 16 teams that reached the postseason look to take their first step toward the 2016 USL Cup. Three former champions are part of the field, with defending champion the Rochester Rhinos at home to begin their defense, and Sacramento Republic FC and the Charleston Battery also part of the field in their respective conferences.

GAMES TO WATCH
Eastern Conference Quarterfinals
Saturday, October 1
No. 4 Rochester Rhinos vs. No. 5 Charlotte Independence
Kickoff – 6:05 p.m. ET | Rhinos Stadium | Match Center
The Rochester Rhinos open their championship defense against a Charlotte Independence side that will make its postseason debut at Rhinos Stadium. The Rhinos took a victory in their final game of the regular season to move past the Independence, who could only draw in Louisville, to earn the right to host the contest, and Rochester will be hoping its stellar recent form that saw it end the season on a nine-game undefeated streak will continue on into the postseason.

Sunday, October 2
No. 1 New York Red Bulls II vs. No. 8 Orlando City B
Kickoff – 4 p.m. ET | Red Bull Arena | Match Center
The Red Bulls II will begin their attempt to add the USL Cup to their regular season championship when they play host to an Orlando side that needed a victory on the final day of the regular season to book its postseason berth. New York took a victory in nine of its final 10 games of the season, including a 5-1 win against OCB on home turf on August 12, and having set USL single-season records for wins (21), points (69) and goals scored (61) enter as a strong favorite.

No. 3 FC Cincinnati vs. No. 6 Charleston Battery
Kickoff – 4 p.m. ET | Nippert Stadium | Match Center
FC Cincinnati is expected to welcome a USL postseason record crowd for its first playoff contest in club history as it hosts the 2012 champion Charleston Battery at Nippert Stadium. The club announced on Thursday it had sold 20,000 tickets for the game, which would put it on track to surpass the 20,886 fans in attendance at the 2013 USL Cup hosted by Orlando City SC. In the Battery, however, FCC faces a side that claimed the regular-season series between the two teams and earned a 1-1 draw at Nippert Stadium in their previous visit.

No. 2 Louisville City FC vs. No. 7 Richmond Kickers
Kickoff – 7 p.m. ET | Slugger Field | Match Center
Louisville City FC enters its second postseason by playing host to a Richmond Kickers side that has advanced to every postseason in the USL’s six-season history. The Kickers have never advanced to the USL Cup Final in that span, however, and will face a big test on the road against a City side it has never defeated in their four previous meetings. What’s more, Louisville had taken victories in each of the two contests played at Slugger Field, including a 2-0 win on September 10 that pushed the side toward the No. 2 seed in the conference.

Western Conference Quarterfinals
Friday, September 30
No. 4 Swope Park Rangers vs. No. 5 LA Galaxy II
Kickoff – 8:30 p.m. ET | Children’s Mercy Victory Field | Match Center
The Swope Park Rangers enter their first postseason in their best form of the season, but could get a strong test from an LA Galaxy II side that sat with the same seeding a season ago before claiming the Western Conference Championship. The Rangers have won four consecutive games entering the playoffs, which powered the side into the top four in the conference, and took a victory in the only prior meeting between the two teams when they defeated Los Dos 2-1 on August 27.

No. 3 Colorado Springs Switchbacks FC vs. No. 6 Vancouver Whitecaps FC 2
Kickoff – 9 p.m. ET | Switchbacks Stadium | Match Center
Colorado Springs Switchbacks FC enters its second consecutive postseason with the same seeding as a year ago as it plays host to playoff newcomer Vancouver Whitecaps FC 2. The Switchbacks had an outing to forget in its regular-season finale as it dropped out of first place in the West with a 4-0 loss to Orange County Blues FC, while WFC2 has both the momentum of a 2-1 win against OKC Energy FC in its final regular season outing and some confidence to draw on after earning a 1-1 draw at Switchbacks Stadium earlier this season.

Saturday, October 1
No. 2 Rio Grande Valley FC vs. No. 7 OKC Energy FC
Kickoff – 8:30 p.m. ET | Toro Stadium | Match Center
Rio Grande Valley FC makes its playoff debut as it hosts OKC Energy FC after a remarkable opening year that saw the club finish with the best defensive record in the Western Conference, and display a potent attack that rattled off 21 goals in its last eight games of the regular season. By contrast, last season’s Western Conference finalist Energy FC is coming in looking to find its form, with the club winless in its last six games of the regular season, and sporting an attack that scored only 32 goals in the regular season.

No. 1 Sacramento Republic FC vs. No. 8 Orange County Blues FC
Kickoff – 10:30 p.m. ET | Bonney Field | Match Center
Sacramento Republic FC begins its quest for a second championship in three seasons with a clash against in-state rival Orange County Blues FC, which booked its place on the final Saturday of the season in the tightest playoff race in USL history. The Blues helped boost Republic FC into the No. 1 seed, as their 4-0 win against Colorado Springs allowed Sacramento to jump past the Switchbacks with a 4-0 win of its own in Tulsa, but Orange County will pose a threat for an upset having taken victories in the regular season at Bonney Field in each of the past two seasons.

12 – The Charleston Battery and Rochester Rhinos lead this year’s postseason field having both scored 12 goals in their respective postseason histories. Charleston also leads the field with nine games, having posted a 5-4 record in its previous six postseasons.

6 – The Charleston Battery and Richmond Kickers are the only two teams to have advanced to all six postseasons in USL history.

4 – The postseason field features four 2016 expansion teams: FC Cincinnati and Orlando City B in the Eastern Conference and Rio Grande Valley FC and the Swope Park Rangers in the Western Conference.

3 – The New York Red Bulls II are hoping to become the third USL team to win both the USL Regular Season title and the USL Cup Final in the same year. The only two teams to do were 2011 Orlando City SC and the 2015 Rochester Rhinos.

- The USL announced its statistical award winners on Monday afternoon, with FC Cincinnati’s Sean Okoli claiming the USL Golden Boot with 16 goals in the regular season. The Portland Timbers 2’s Villyan Bijev earned the title of Assists Champion with 10 assists, and the Rochester Rhinos’ Tomas Gomez claimed the Golden Glove with a goals-against average of 0.69, the second consecutive season a Rhinos goalkeeper has won the award.

- The USL’s overall attendance rose by 33 percent in the 2016 regular season, as the league’s 29 clubs played host to almost 1.5 million fans over the course of the season. FC Cincinnati set USL records for both regular-season cumulative attendance with 259,437 fans visiting Nippert Stadium over the season, and single-game attendance as 24,376 fans were on hand for the club’s regular-season finale against Orlando City B.