A rousing return in Rochester, and another Top 10 highlight for FC Cincinnati. 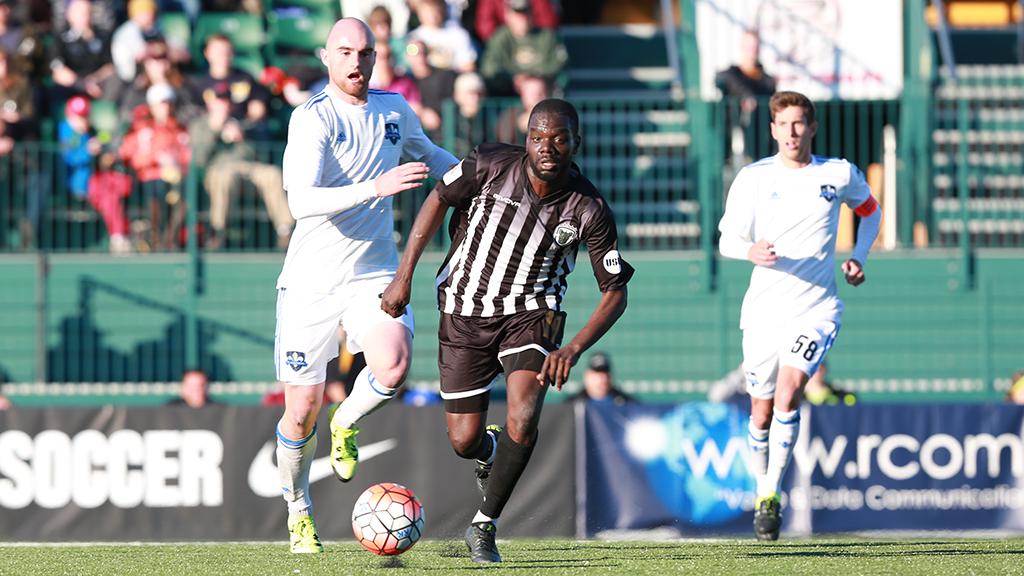 TAMPA, Fla. – A rousing return in Rochester, and another Top 10 highlight for FC Cincinnati. Here’s what we learned from Week 5 in the USL:

1. ROCHESTER RESURGENCE UNDERWAY: The Rochester Rhinos rode a pair of goals by Christian Volesky to earn a 2-1 victory against FC Montreal for their second win of the season, but arguably more importantly the defending champions’ new ownership group led by David and Wendy Dworkin made an outstanding first impression as the continuing renovations to Rhinos Stadium were unveiled to the public. Last season the Rhinos had a championship team on the field. Now they have one leading the organization.

2. TIP-TOP HILDEBRANDT: It’s starting to seem like FC Cincinnati’s players have a flair for the spectacular, as was evidenced again on Sunday when Mitch Hildebrandt’s outstanding double-save saw him land on ESPN’s SportsCenter Top 10. As brilliant as the saves where, though, they were also vital for Coach John Harkes’ side, which then proceeded to grab all three points from a Toronto FC II side that must have thought it should have had the lead moments earlier.

3. TOUGH TORONTO: While its first loss of the season will be a tough one to swallow, there remains a lot to like about the way Toronto FC II has looked so far this season. It’s a far cry from a year ago, when the team was understandably inconsistent for its inexperience, but now those players – led by Raheem Edwards, Skylar Thomas and Chris Manella – are proving how valuable that experience was. Edwards’ fourth goal of the season on Sunday matched Mo Babouli’s team-high total for the season in 2015.

4. TURNER TURNING HEADS: After being a finalist for the USL’s Rookie of the Year award in 2014, the potential displayed by Tyler Turner was evident. Pushed into a bit-role for Orlando City SC in the club’s first season in MLS, the 20-year-old showed how good he could be on Friday night with a two-goal performance that led Orlando City B to its first win in club history. It wouldn’t be a surprise to see more of the same on Monday night as the Lions visit Harrisburg to complete their trip to Pennsylvania.

5. WFC2 RALLIES HARD: The LA Galaxy II looked to have ended a recent run of letting leads slip on Friday night with a two-goal lead against Vancouver Whitecaps FC 2, but the visitors to StubHub Center showed remarkable resilience to come back and earn a 2-2 draw with a pair of fine goals. Fatawu Safiu was involved in both, scoring in the 70th minute before threading the needle for Kyle Greig’s equalizer as WFC2 remained undefeated with a very positive display.

6. INDEPENDENCE ASSERTED: The Charlotte Independence again didn’t make it easy on themselves, but a 3-2 victory against the Richmond Kickers coming off the back of a win against the Charleston Battery made a very strong statement as to where the club stands in the Eastern Conference’s pecking order. Enzo Martinez has hit a rich vein of form, as evidenced by his excellent long-range finish, and the side has back-to-back wins for the first time since August 22-26 last season against Pittsburgh and Montreal.

7. HOFFMAN STAYS HOT: With six goals now on the season, all coming in the past three games, Louisville City FC’s Chandler Hoffman has quickly assumed the mantle Coach James O’Connor hoped he would take up when the standout forward signed this offseason to replace Matt Fondy. With the ESPN Game of the Week visiting Louisville this Wednesday for the club’s game against the Pittsburgh Riverhounds, a national audience will get the chance to see him try to continue his outstanding recent run of form.

8. BATTERY BOUNCE BACK: The Charleston Battery only conceded three goals in a game twice last season – back-to-back against Louisville and Saint Louis – so Sunday’s shutout against Bethlehem Steel FC came as a welcome rebound for Coach Mike Anhaeuser. While the Battery would obviously have preferred to take all three points, a point on the road as the club heads home to face Pittsburgh on Saturday proved satisfactory against a good Steel attack.

9. SACRAMENTO STRUGGLES: The sellout crowd was boisterous again, but Sacramento Republic FC’s attack continued to sputter as Saint Louis FC left Bonney Field with a 1-0 victory on Saturday night. While the victory was a big one for STLFC, which now sits fourth in the Western Conference, Sacramento’s one goal from open play in five games this season will be a major concern for Coach Paul Buckle as an in-form Orange County Blues FC side comes to town next Saturday.

10. RED BULLS II ROLL ON: Visiting a highly motivated Wilmington Hammerheads FC side could have been a chance to slip up for the New York Red Bulls II on Friday night, but the visitors put in a highly disciplined display that was capped by a goal by Dan Metzger to take a solid 1-0 win on the road. The Red Bulls II have shown flair to start the season undefeated, but on Friday showed the side also has what it takes to earn a win regardless of the situation.

11. ENERGY JOLT: OKC Energy FC might have jumpstarted its season on Saturday night, as Kalen Ryden’s late winner earned a 1-0 victory at Taft Stadium against a good Swope Park Rangers side that entered the contest undefeated. Coach Jimmy Nielsen paid tribute to the crowd following the game, and with a trip to Seattle up next OKC will try to use that energy to propel itself up the standings.