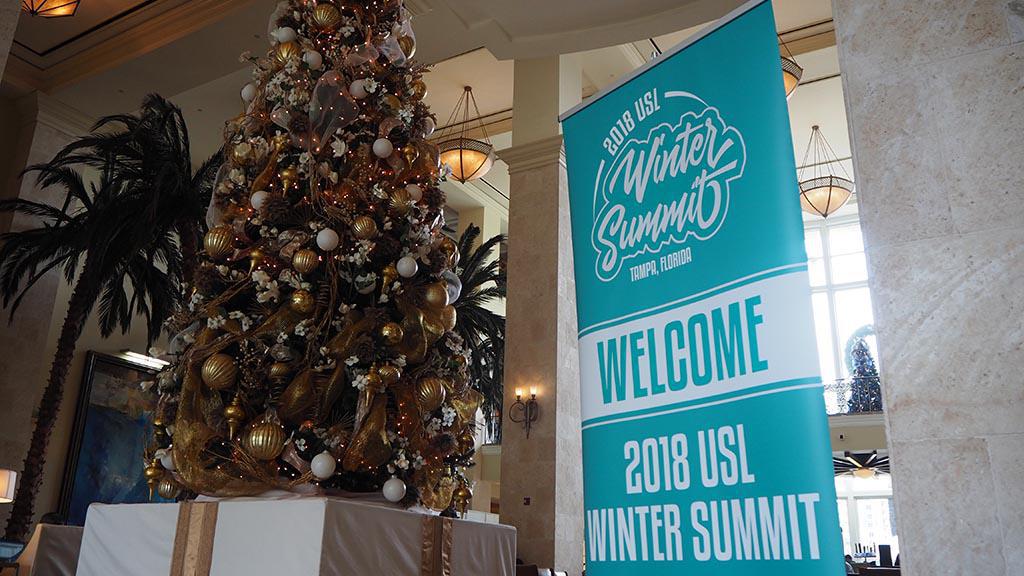 TAMPA, Fla. – The 2018 United Soccer League Winter Summit opened on Monday in downtown Tampa at Marriott Waterside Hotel & Marina as the organization’s leadership welcomed representatives from clubs across its three leagues for a week of meetings and presentations in the Sunshine State.

The event opened with the assembly of the USL Championship Board of Governors, where USL Chief Executive Officer Alec Papadakis, President Jake Edwards and guest speakers addressed the assembled club representatives following the conclusion of the biggest year in the organization’s history.

“This has been a transformative year for the United Soccer League,” said Edwards. “From the unveiling of our new branding to the expansion of our media partnership with ESPN to the incredible success our clubs have seen on and off the field — including setting a new total attendance record of almost 3 million fans. This week will build on the foundation we have established and allow for our clubs to prepare in the best way possible for 2019 and beyond.”

In addition to the meetings of each league’s Board of Governors, there will be numerous daily presentations that span all facets of club operations to offer insights and best practices, the goal of which is to maximize business performance across all levels.

A wide range of organizations will also be on hand, including members of the growing USL Preferred Supplier Program that has seen rapid expansion in the past year, for the annual trade show that has established itself as a major part of the Winter Summit.

“The opportunity for our clubs to gain insights from professionals both within the league and the guest speakers that have been invited has proven invaluable in the growth of our league,” said Edwards. “There’s no doubt that 2018 was our biggest and brightest year to date, but what these meetings are all about is learning, growing, and building towards an even bigger, brighter 2019 season.”

FOLLOW THE USL
Follow live updates and take part in the 2018 USL Winter Summit by using the hashtag #USLWS18 on Twitter and Instagram. The USL and its leagues can be followed on Twitter for news from the Winter Summit at @USL_HQ, @USLChampionship, @USLLeagueOne and @USLLeagueTwo.