TAMPA, Fla. – The United Soccer League announced on Wednesday that FC Cincinnati playmaker Emmanuel Ledesma has been voted the 2018 USL Most Valuable Player. The Argentine set a single-season record for assists as part of a spectacular year that saw him lead the club to the 2018 USL Regular Season Championship.

Ledesma soared past the previous mark for assists in a single season of 12 as he recorded 16 helpers and finished the regular season with 66 chances created and a league-best 21 big chances created. In addition, Ledesma also recorded 16 goals, making him the first player in the league’s modern era to record at least 15 goals and 15 assists in a single season.

“I want to shout right now, I want to go crazy!” said Ledesma. “It’s something I’ve been looking for from the beginning of the season. I would not be in this position without my teammates, and this award is really about them, too. They were excellent all season and the reason we were so successful on the field. I’m so, so happy that this recognizes the hard work everyone did this year. I want to say thank you very much to every single person who works at the club and obviously the fans, too, who have made FC Cincinnati such a special place to play.” 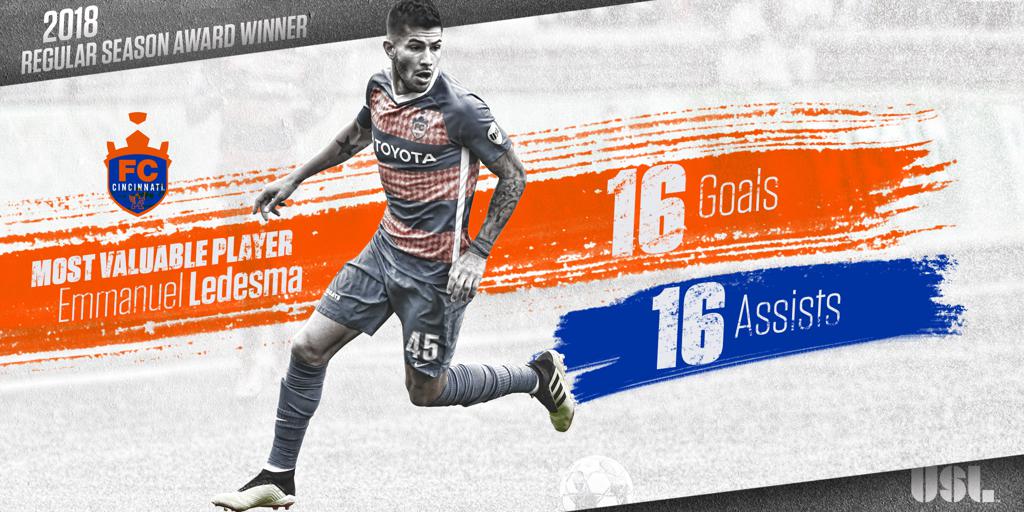 The 30-year-old Argentine regularly produced highlight-reel moments as well, with a league-leading eight of his goals coming from outside the penalty area as FC Cincinnati swept to a remarkable year that saw it record a league-record 23-game undefeated streak and 10-game winning streak. Ledesma’s total of 32 combined goals and assists also surpassed the previous mark of 29 held by two of his predecessors as USL Most Valuable Player in Kevin Molino (2014) and Matt Fondy (2015).

“Emmanuel has been a sheer joy to watch create his magic on the field this season,” said FC Cincinnati President Jeff Berding. “We knew we were bringing in a special player, but it has been great to see how quickly he settled into Cincinnati and how fast our community and fans embraced him. To have the year he did – the record-setting assists and the number of goals, not to mention the importance of many of his goals and assists to secure games for us – he truly had a season for the ages. We firmly believed Manu should be the USL Most Valuable Player this season, and we’re so proud to see that the rest of the league agreed.”