TAMPA, Fla. – The United Soccer League announced on Monday that Ottawa Fury FC goalkeeper Maxime Crepeau has been voted the 2018 USL Goalkeeper of the Year. The Canadian international recorded a USL single-season record with 15 shutouts for Fury FC in 31 appearances to claim the honor.

Crepeau spent the 2018 USL season on loan with Fury FC from Major League Soccer’s Montreal Impact and produced a stellar season that helped keep the side in contention for the USL Cup Playoffs until the final game of the regular season. Once again selected in Canada’s Men’s National Team squad last week for its upcoming Concacaf Nations League Qualifying contest with St. Kitts & Nevis, Crepeau drew high praise from Fury FC’s technical staff throughout the season.

“It is an honor to receive this award, and I am proud of having represented the city of Ottawa,” said Crepeau. “I would like to thank the Ottawa Fury FC organization, the fans, and most importantly, my teammates for their undying determination and support all season long.

“This season has provided me with a platform throughout the USA and Canada, I strongly believe this was the first step in allowing me to achieve my objectives and look to surpass them in the future.” 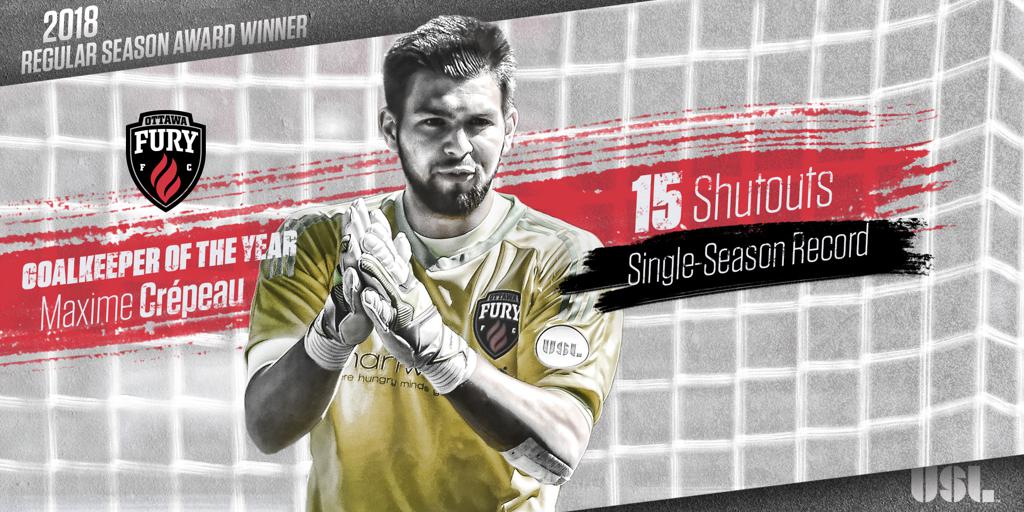 The 24-year-old registered 82 saves in the regular season at a 72.6 save percentage with an even 1.00 goals-against average. He surpassed the single-season USL shutouts record previously held by Brandon Miller, who recorded 13 shutouts for the Rochester Rhinos in the 2015 season.

“Some of the positives of the season are some of the individual performances that we’ve seen, so for a guy like Maxime to receive this award is a fantastic showing of team effort for Fury FC,” said Fury FC General Manager Julian de Guzman. “It wasn’t the easiest transition at first for Maxime, leaving Montreal to come to Ottawa, but he has grown into a more mature professional, and he got the opportunity to not just get games but be in a professional environment that would help him develop. These are some of the points we can reflect on and be proud of, as an organization.

“The amount of work that he has invested in this team allows our club’s identify and vision to prevail for upcoming seasons and would hope it can serve as an example of what we are looking for in players in the future. This is a great honor for Maxime, great for Ottawa Fury FC and we are certainly very proud of him.”