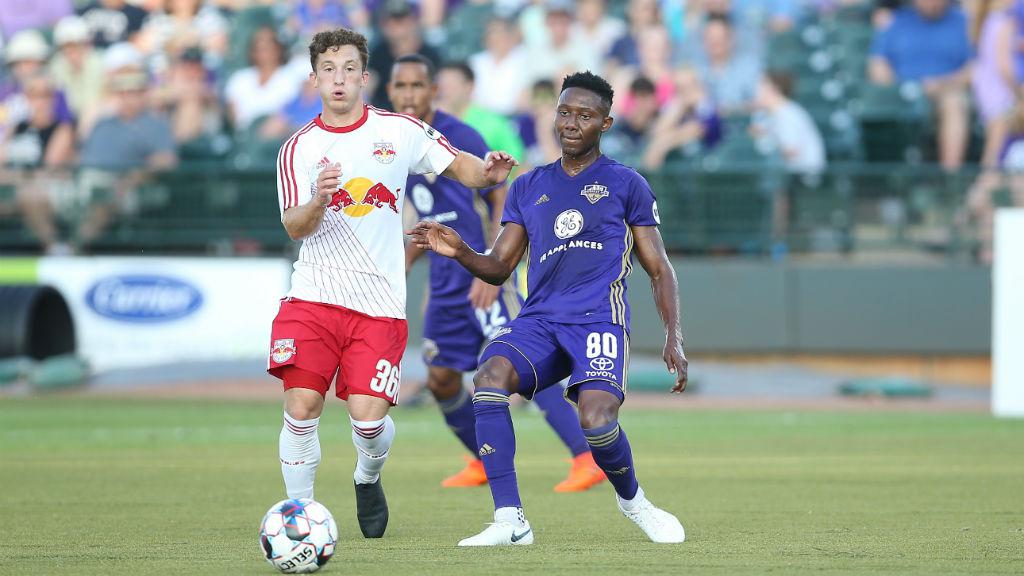 LOUISVILLE, Ky. – After ending FC Cincinnati’s historic 24-game unbeaten run and advancing to the Eastern Conference Final with a 1-0 victory at Nippert Stadium last Saturday afternoon, the New York Red Bulls II had to wait a few hours to figure out where their USL Cup Playoffs journey would take them next.

Approximately three and a half hours later, Brian Ownby’s brace against Bethlehem Steel FC had provided the answer.

The Red Bulls II would be heading back to Slugger Field – the place where their 2017 campaign came to an end in a penalty shootout – to face Louisville City FC in the Eastern Conference Final for the third straight season on Friday night (7:30 p.m. ET | Match Center | ESPN+).

The budding rivals have split the previous two conference final meetings, with the home team emerging victorious via the lottery of penalties on both occasions before going on to hoist the USL Cup. After playing out a 1-1 draw over 120 minutes, New York claimed the 2016 conference crown with a 4-3 shootout win, only to have Louisville turn the tables a year later with a victory by the exact same scoreline.

“It was a hard-fought battle, it was just unlucky,” New York midfielder Andrew Tinari said of last year’s loss. “PKs, you just never know what can come from it and unfortunately, we were on the losing end of that game. I mean it is what it is, but now we have a chance to make that right this year.”

To do that, the Red Bulls II will have to accomplish a feat that no USL team has managed to date – getting a road victory at Slugger Field in the USL Cup Playoffs. With last Saturday’s 2-0 victory over Steel FC, Louisville improved to 9-0 all-time in postseason contests on its home turf.

New York is confident that it can be the team to provide the first blemish to that record, especially after going into Cincinnati last weekend and handing FCC its first loss in more than five months. Red Bulls II goalkeeper Evan Louro believes that victory in a hostile environment of over 16,000 fans proved his team’s ability to stay calm under pressure.

“I think for sure this year we have a better group of guys that are hungry and not really intimidated by anything,” said Louro. “Louisville is the same as Cincinnati, they’re a really good team, they have really good attacking players, but we’re ready for the challenge. The few guys that were here last year remember that feeling and we don’t want to let that happen again.”

Tinari played the full 120 minutes but did not get the opportunity to take a penalty in last year’s matchup, while standout center back Hassan Ndam started the contest but was substituted after 58 minutes. Both players have been instrumental in New York’s return to this stage but offered differing opinions about the importance of avenging last season’s setback.

“Everyone keeps bringing up the word revenge, but [we’re] just trying to go out there and finish the job,” said Tinari. “We’re trying to go win the Cup and there’s another team in front of us so we’re going to do the best we can to win.”

That mentality also rings true within the Louisville squad, which still features a handful of players – including veteran defenders Paco Craig and Kyle Smith – that suited up for the side in its 2016 defeat at Red Bull Arena.

Smith, who played the full 120 minutes and converted a penalty in both shootouts, said that playing against the Red Bulls II is always a challenge because of their high press and expects Friday night to be no different against a motivated New York squad.

“I feel like they always come with intensity,” said Smith. “I feel like they’re going to bring that again and they’re probably going to have a chip on their shoulder. A lot of them will remember last year. I know they have a lot of new players, but they have some of the same players as well so I’m sure those guys will be reminding the teammates that weren’t here last year that they need to bring everything they have and leave all of it on the field.”

That message was similar to the one that Smith and other Louisville veterans sent their first-year teammates, like Oscar Jimenez, during the build-up to the 2017 rematch as Louisville looked to break through to its first USL Cup.

“Last year, the players that had played in that final previously, it was one thing they talked about leading up to the game, it was like ‘We lost to them in a shootout, that’s not going to happen again, we won’t let it happen like that again,’” said Jimenez. “[The Red Bulls] lost in a PK shootout last year to us, so their mindset could be exactly what we were thinking last year.”

On top of having the motivation from last year’s loss, New York wants to capitalize on the opportunity in front of them after playing some of their best soccer of the season in recent weeks. That has been especially true on the defensive side of the ball, as New York has yet to concede a goal in the playoffs after having one of the leakiest defenses in the USL during the regular season.

The Red Bulls II allowed 59 goals in 34 games this campaign – the most among any team in the postseason field – but have turned things around when it matters most. Over the past seven games, New York hasn’t allowed more than one goal, and has only conceded 30 shots on goal, an average of only 4.3 per game.

Louro said his side’s improved defensive record isn’t the result of any tactical changes, but rather a stronger understanding of the tactics among the squad as the season has progressed. The 22-year-old goalkeeper admitted that the Red Bulls’ high press system isn’t an easy one to pick up right away and that it’s taken some time for the team’s new players to adjust to it and begin to execute without a second thought.

“I think the biggest thing, which people might not really talk about, is the confidence because you need to know that if you’re going, you need to know that your teammate is coming behind you,” said Louro. “I think players struggle with that when they first start out because it’s something new, it’s something that they’ve never had to kind of deal with. They’re always used to looking over their shoulder and making sure were all together, but with us you need to have that confidence and that trust that if you go, you don’t even need to look, the guy behind you is going and then the guy behind him is going.”

That defensive cohesion will be put to the test against a Louisville side that finished in a tie for second in scoring during the regular season with 71 goals – matching New York’s total – and netted nine times in two contests against the Red Bulls II. The sides played out a 3-3 draw at Slugger Field in June, before Louisville picked up three points with a 6-4 victory at MSU Soccer Park.

USL Golden Boot winner Cameron Lancaster, who established a new USL standard with 25 goals this campaign, scored five times over those two meetings, including netting a hat trick in the August victory. Jimenez doesn’t expect such a high-scoring game this time around but hopes that Lancaster and the rest of the Louisville attack can do enough to help the club make the most of another conference final appearance and return to the USL Cup.

“We wanted to get back to this spot when everybody got back for preseason,” said Jimenez. “We were still hungry for more even though we had just won so it’s good to be back.”