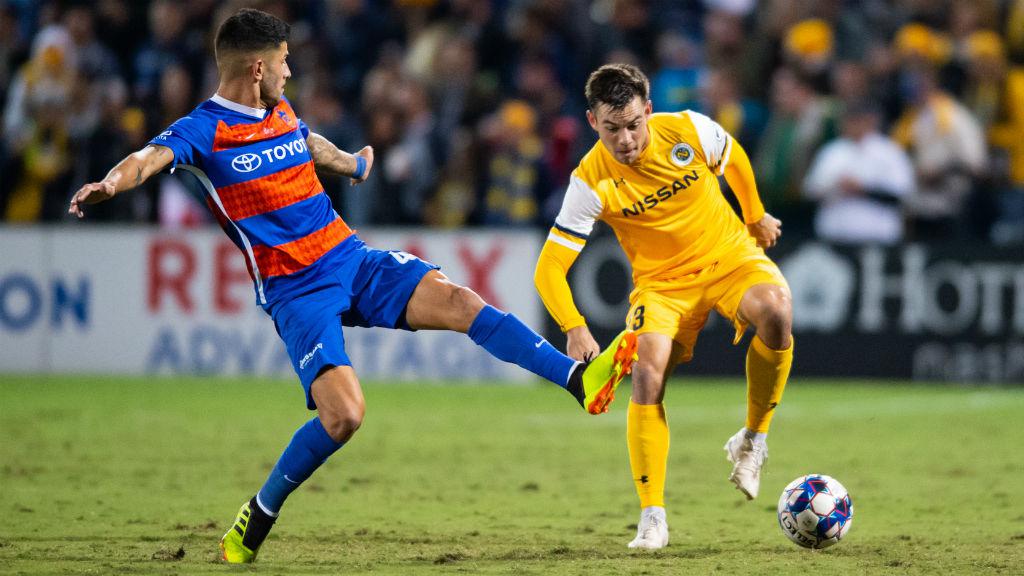 NASHVILLE – Nashville SC entered its regular-season home finale against FC Cincinnati knowing that it had already locked up a spot in the postseason, but that didn’t stop the side from chasing a result against the 2018 USL Regular Season champion as the two sides played out a thrilling 3-3 draw on Saturday at First Tennessee Park.

“It’s a good feeling knowing we are already in it, but we wanted to go even further and potentially get a higher spot in the playoffs and also get momentum going into the playoffs,” Nashville forward Tucker Hume said after the match. “We wanted to come here and not just play but also send a statement as well. It’s Cincinnati, the top of the league, and a game that we had tied before, so we wanted to do our best.”

After Hume headed the hosts into the lead five minutes after the opening kickoff, Nashville faced a stern fightback from a Cincinnati side that was determined to extend its unbeaten run to a USL-record 23 games. Corben Bone equalized for the visitors shortly after halftime and Nazmi Albadawi’s header gave FCC the lead with just under a half-hour to play.

NSC showed its resolve, though, fighting back from two separate deficits in the final ten minutes as Brandon Allen’s volleyed effort made it 2-2 before Bolu Akinyode’s strike from the top of the penalty area cancelled out Bone’s second goal of the night in the 90th minute.

“We were relaxed, and we didn’t need the tie, so we just went out there and played,” said Akinyode. “We are competitive, and they are a team that likes to score goals and we have to match that every time we play them.”

The two sides won’t have to wait long to square off again as No. 8-seed Nashville heads to Nippert Stadium to face No. 1-seed Cincinnati in the Eastern Conference Quarterfinal on Saturday.

Nashville will head north as a heavy underdog against the USL Cup favorite, but the squad likes its chances to spring an upset after earning a 1-1 draw in an August trip to Cincinnati and going unbeaten in each of its three matches against FCC this season.

"I know we’ve drawn all three, but based on tonight as well as the other two games, we given as good as we’ve gotten these games,” said NSC Head Coach Gary Smith. “We’re creating a really up-tempo and high-octane relationship and rivalry here with Cincinnati.”

READY TO RUN IT AGAIN: Defending USL Cup champion Louisville City FC returns to the postseason on the back of six straight victories after completing its regular-season campaign with a 1-0 home win over Indy Eleven on Saturday night at Slugger Field.

Both sides created their fair share of chances in a back-and-forth contest, but Louisville was able to keep a clean sheet against its regional rival thanks to some resolute defending – notably Niall McCabe clearing Karl Ouimette’s first-half header off the line – and steady goalkeeping from Greg Ranjitsingh.

Cameron Lancaster provided the game’s only offense from the penalty spot 11 minutes before the break as the English forward brought his record-setting tally to 25 goals for the season on his way to claiming the USL Golden Boot.

“Going into the game, we knew we were going to be the two-seed,” Louisville captain Paolo DelPiccolo said after the match. “For us, we have the mentality that there's not a game that doesn't mean anything. Every game is important and for us, we went out there and did what we could to win tonight.”

Having attempted 16 shots over the 90 minutes, Indy Head Coach Martin Rennie thought his side were unlucky to not get at least a share of the spoils but was happy with his team’s performance as it prepares to make its USL Cup Playoffs debut this coming weekend.

“Obviously we’re disappointed that we didn’t get more out of the game, but we also feel that we did play a lot of good stuff and it was a great game,” said Rennie. “Probably everyone that was here tonight got good value for [their] money and hopefully we’ll get the chance to play them again.”

Thanks to results elsewhere over the weekend, Rennie’s side will get another shot at Louisville on Saturday in the Eastern Conference Quarterfinals as the No. 7-seed Eleven head back to Slugger Field for a rematch with the No. 2 seed. This will be Indy’s third trip to Louisville this season and fourth meeting between the two sides overall, with Indy having earned a point in a 2-2 draw at Slugger Field in August after claiming a 1-0 win over the defending USL Cup champion at Lucas Oil Stadium in May.

Louisville, which maintained 56.3 percent of possession and attempted nine shots on target to Indy’s four in Saturday’s victory, will try to match both the performance and result this coming weekend as Head Coach John Hackworth’s side begins its quest to become the first team in the USL’s modern era to win consecutive USL Cup championships.

“This is now win or go home,” said Hackworth. “So, we’re just trying to win every game. It’s not about style, it’s not about how we play. It’s strictly to just win. And those guys in the locker room know that better than anybody in this league. They’re defending champions and they’re playing like it. So hopefully any team coming here will have to understand that and deal with us.”

WORTH THE WAIT: Bethlehem Steel FC had to wait until the final day of the 2018 USL Regular Season to clinch a playoff berth, but Head Coach Brendan Burke’s side got the job done just in time as it claimed a 1-0 home victory over the Tampa Bay Rowdies on Sunday at Goodman Stadium to seal its return to the postseason for a second straight year.

“It’s a great accomplishment and the players were excellent,” Burke said after the match. “They had to dig in and fight the field conditions because they were really poor today. Today is a celebration of the season, more than just one game. Ugly game but we’ll take it anyway it comes and to get three points against a franchise that big [in] your final home game. We’re going into the playoffs happy and energetic which is the best way to go in I think.”

Michee Ngalina found the top-right corner from 12 yards out to give Bethlehem the lead inside the first quarter of an hour and the hosts probably should’ve extended that advantage before halftime but failed to take advantage of its superior play early on. The Rowdies fought back in the second half and ended the contest with over 54 percent possession and eight more attempted shots than the home side, but Tampa Bay wasn’t clinical enough in front of goal to make the home side pay.

With the win, Steel FC leapfrogged Nashville SC and Indy Eleven into the sixth spot in the final Eastern Conference standings and will head to Highmark Stadium on Saturday to face No. 3-seed Pittsburgh Riverhounds SC in the Eastern Conference Quarterfinals. Bethlehem suffered a pair of defeats against its Pennsylvania rival earlier this season, falling 2-1 on its home turf in August before September’s 4-1 setback at Highmark Stadium, but that won’t stop the side from “cutting it loose” this coming Saturday.

“We are in, we’re in a position where you never know what could happen,” said Burke. “Once you get into a playoff-type situation, you take a full swing at whatever is in front of you and see what you get.”

RIDING HIGH: The New York Red Bulls II are charging into the 2018 USL Cup Playoffs as the side completed its regular-season campaign with a 2-1 victory over Pittsburgh Riverhounds SC on Sunday at MSU Soccer Park.

Tom Barlow scored for the second time in three games to give the hosts the lead on the half-hour mark and New York held on in the second half thanks to the heroics of goalkeeper Scott Levene, who saved Kenardo Forbes’ 70th-minute penalty. Jared Stroud scored in the first minute of second-half stoppage time to render Joe Greenspan’s 95th-minute strike as mere consolation as the Red Bulls II exacted revenge on the Riverhounds after falling 3-0 in Pittsburgh earlier this season.

“It’s huge for us,” Barlow said after the match. “They knocked us around pretty good the last time we played them, so it was nice for us to come out and get a win against them. We clinched playoffs last game, but we came out with the mentality that we weren’t going to take this game lightly, especially going into the playoffs to get some momentum.”

New York did just that as it picked up its third consecutive victory and moved up the standings to claim the fifth-seed in the Eastern Conference. The Red Bulls II will head to MUSC Health Stadium on Saturday to face the No. 4-seed Charleston Battery in the Eastern Conference Quarterfinals, having played a thrilling 4-4 draw at the venue back in August in a match that saw Barlow record a hat trick.

Red Bulls II Head Coach John Wolyniec said it has taken some time for his squad to gel given some of the new faces it has integrated into the lineup this season but likes the way his side is shaping up as it heads into the postseason for the fourth straight season.

“As a coach, you always want to see your team peak at the right time, so no time like the last three games to get some wins, especially with two of them being on the road,” said Wolyniec. It sets us up well, gives us a lot of confidence going into the playoffs.