LOUISVILLE, Ky. – Aside from the elation that came with the moment, there was also a good degree of poignancy for Louisville City FC forward Cameron Lancaster on Tuesday night after his two-goal performance not only sent LouCity to a 2-1 victory against North Carolina FC at Slugger Field but also established the English forward as the single-season goalscoring record holder in the USL’s modern era with his 23rd and 24th goals of the season.

After all, the last time a new single-season scoring mark was set three seasons ago, Lancaster had been an onlooker in the stands wondering if he’d get the chance to accomplish what then-teammate Matt Fondy had in Louisville’s inaugural season.

“It means a lot,” said Lancaster on Tuesday night. “I’ve had a tough journey to get to here. When I saw [former LouCity forward Matt] Fondy do it, I was in the stands with an ACL injury wishing I could be on the pitch doing exactly what he was doing. To do it three or four years on, it means a lot.”

Fondy recorded a hat trick against Penn FC in Louisville’s home regular-season finale to become the record-holder back in 2015, but none of those three goals were of the nature of Lancaster’s first on Tuesday night. The 25-year-old’s spectacular turning finish from 30 yards early in the second half picked out the left corner of the net and provided a distillation of the season Lancaster has produced for Louisville this year.

“I honestly didn’t even have a look,” said Lancaster. “I had a few chances I probably should’ve scored on in the first half and so I just thought I needed to take a pop and test the ‘keeper early. Thankfully it came off.” 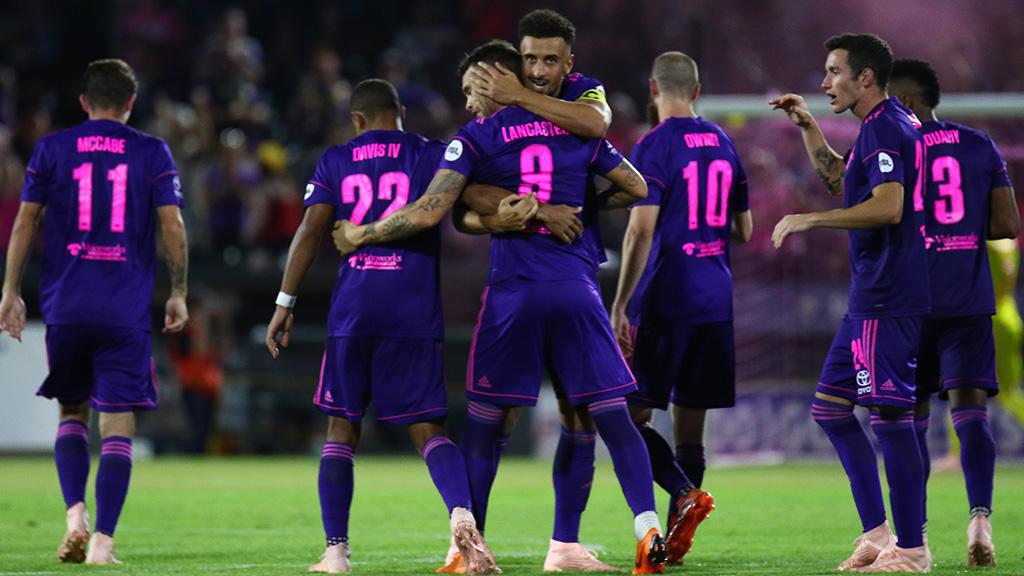 The goal was Lancaster’s seventh from outside the penalty area this season, and immediately ranked among the best he’s produced in Louisville’s colors as he capitalized brilliantly on a quick pass upfield by center back Paco Craig. Handed the captain’s armband on the night in the absence of Paolo DelPiccolo, Craig paid tribute to his record-breaking teammate.

“As soon as the ball was dropping, I saw Cam free,” said Craig. “I was thinking, ‘Let me get it to him. Let me just run in from behind and pass on the front foot,’ basically. I was just trying to be aggressive on the attack and luckily it paid off. Cam with an absolute wonder-strike.”

Lancaster’s second wasn’t nearly as spectacular, but it could prove crucial to Louisville’s goal of securing a top-two finish in the Eastern Conference for a fourth consecutive season as he tapped home a first-time cross by Kyle Smith that bisected the North Carolina back line and NCFC goalkeeper Alex Tambakis to allow Lancaster to finish from close range with six minutes to go.

Louisville now holds a five-point edge on Pittsburgh Riverhounds SC ahead of the Hounds’ contest with ATL UTD 2 on Wednesday night and will go into Saturday’s regular-season home finale against Indy Eleven knowing a draw would be enough to secure the second seed in the East.

“Yeah, it's huge,” said Louisville Head Coach John Hackworth. “We want another home game here in the playoffs and we need to do that for all of us. I would say that you definitely saw we had a tough trip to Toronto in that game and trying to play on such short rest and return and the way that we were traveling, it took a lot out of us. So really, again, we showed a lot of character to come back and fight for that.”

As important as the victory was, though, the night belonged to Lancaster. Three years on from being an observer to history, the English forward himself became the man in the spotlight as he and his teammates celebrated another landmark in the club’s history.

“I can just tell you about what he just told the whole team in that locker room,” said Hackworth. “It means a tremendous amount, but he also gave his teammates a lot of credit for that because they're the ones that are working hard for him. Supplying him and service and ultimately Cam’s the one that has to execute. I think everybody in that locker is celebrating with Cam right now and for Cam, but anytime you reach a milestone like this, it's a collective group. He was very appreciative.”