CINCINNATI – The moment his shot hit the back of the net, FC Cincinnati forward Fanendo Adi knew who he wanted to celebrate with after scoring his first goal for the club.

The 6-foot-4 striker immediately made a bee-line to FCC Head Coach Alan Koch on the sideline, who was waiting with open arms to celebrate the goal that sent the side to the 2018 USL Cup Playoffs after a dramatic 2-1 victory against Pittsburgh Riverhounds SC before a crowd of 25,735 fans at Nippert Stadium.

“I think he wants me here so much, he has supported me, and that’s just to show him I’m very tight to him for everything he has done for me,” said Adi of his celebration. “It’s been a tough time for me, adjusting to the league, to the players and to the city as well, but he’s been there every day for me.”

Adi’s goal provided a moment of release for FCC, which had for much of Saturday night’s contest looked like it was going to end on the wrong side of the result as Riverhounds SC more than matched its hosts throughout the contest to threaten Cincinnati’s lengthy undefeated streak. The Hounds had already been denied by a pair of big saves by FCC goalkeeper Spencer Richey in the first half and seen a penalty kick sent high of the crossbar early in the second half by Kay Banjo before they took the lead in the 57th minute as Romeo Parkes fired home a powerful finish from 12 yards as Pittsburgh scored the opening goal.

But Cincinnati showed the resilience that has marked its undefeated run, which reached 16 games against the Hounds, as with 10 minutes to go Dekel Keinan headed home a well-flighted free kick by Emmanuel Ledesma for his league-leading 11th assist of the season. Richey again came up big two minutes later to keep out Neco Brett’s fierce finish as the Hounds tried to counterpunch immediately, setting the stage for Adi’s 88th-minute winner that sent the crowd into massive celebration. 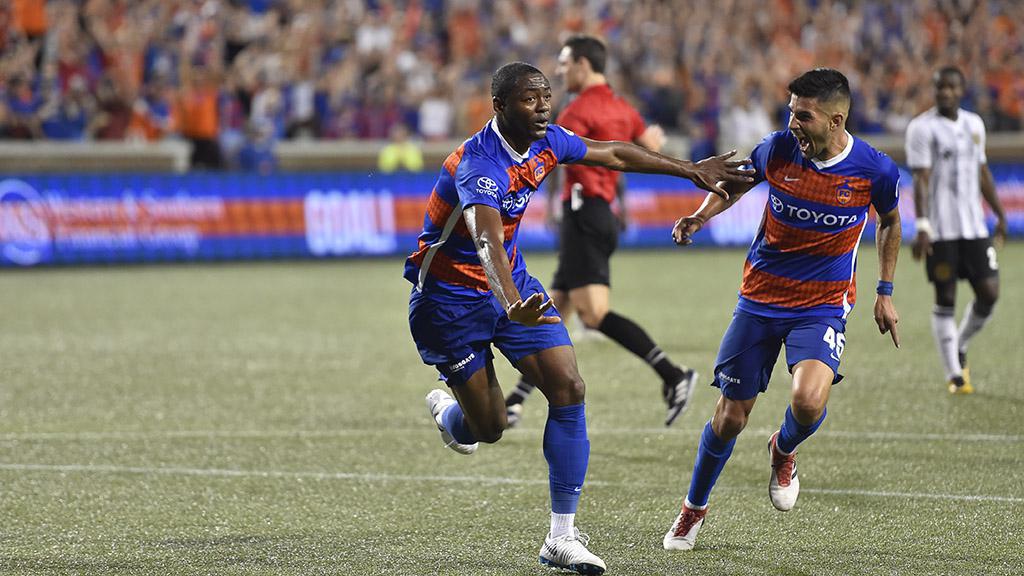 Holding off one of the biggest challengers the side could potentially face in the USL Cup Playoffs, the atmosphere and performance was one that brought a postseason feeling to the FCC locker room.

“Honestly, tonight felt like it had a little something extra, just a different buzz about it,” said Richey. “[FCC President] Jeff Berding comes in and gives us his ‘I don’t love Pittsburgh’ speech before the game and kind of get us up a little bit more before the game. Honestly, they outplayed us for most of the game tonight, but you don’t go two or three months unbeaten without finding ways to win when teams outplay you, so tonight was one of those games. You got to find ways to win.”

The loss for the Hounds was a tough blow, a late cross from the left by Thomas Vancaeyezeele curling just out of the reach of his onrushing teammates and sliding wide of the right post in their final chance of the game. After conceding a late goal in a 2-2 draw with Indy Eleven on Wednesday night, a promising road trip had twice bitten the side in the closing stages as it remained in third place in the Eastern Conference.

For the man whom Adi wanted to share his first celebration with, though, the postgame high was one it might take a day or two to come down from.

“Fun one for many, many reasons, obviously,” said Koch. “Being down is never easy coming back and you’ve got to show the character and the fight to come back, which I think our group showed. I think our group tonight did a very, very good job of managing the individual moments. [It was a] historic night in many respects and most importantly, a big-time three points for our group.”