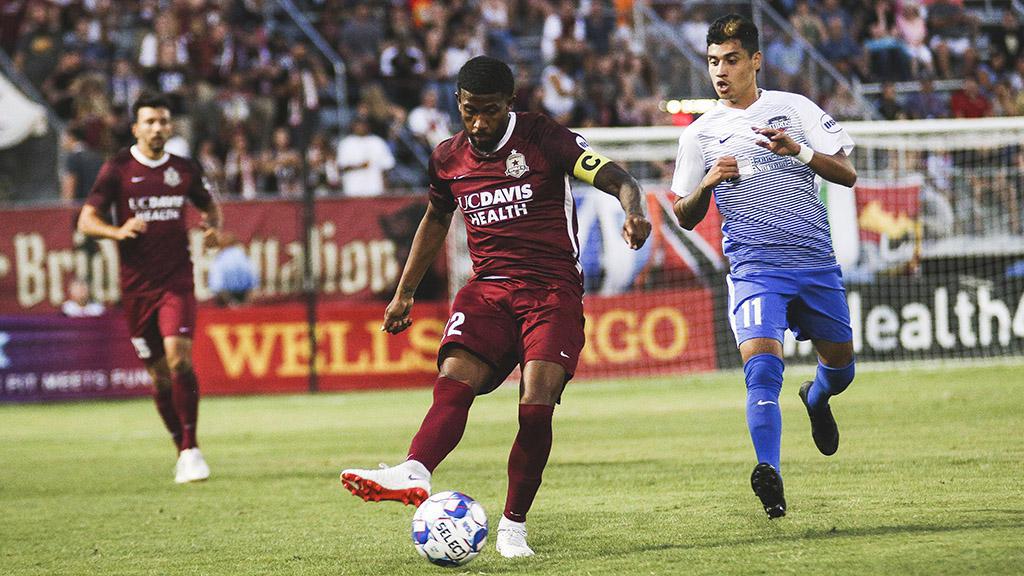 SACRAMENTO, Calif. – Sacramento Republic FC midfielder Jeremy Hall doesn’t score goals regularly, but when he does they tend to be important.

Case in point, his second goal of the 2018 season this past Saturday night against Rio Grande Valley FC, which was also the veteran’s second game-winning goal at Papa Murphy’s Park in 2018. Putting away a good header from Keven Aleman’s free kick in the 68th minute, Hall helped Republic FC to three points as the club extended its undefeated streak to six games in a 2-1 victory on Saturday night.

“We’ve just been talking about getting good balls in the box, giving ourselves chances to get it in and get a shot on goal,” said Hall. “Cam [Iwasa] is somebody who’s going to be in the box. Christian [Eissele] is someone who’s going to be in the box. We’ve got two big center backs who are getting in on corners. We just need a break on that one. I told them I’d get in there and luckily I got on the end of it.”

Both of Republic FC’s goals on the night came from set pieces with Cameron Iwasa making a piece of club history with his 27th goal all-time for Sacramento in the 61st minute, breaking a tie with Rodrigo Lopez for the club record. After going behind inside the opening minute against a bright Toros side only to rally back, Sacramento Head Coach Simon Elliott was pleased his side was able to battle and pick up another victory.

“It wasn’t great, but it doesn’t need to be great,” said Elliott. “Just the effort needs to be there, the willingness, the desire. If we get that, then the football eventually comes. I’m pleased that we found a way.”

FAST START BOOSTS STLFC: With only seven first-half goals in the club’s first 20 games of the season, getting out to faster starts had been a point of emphasis for Saint Louis FC recently as the club looked to push toward the playoff positions in the Western Conference.

After scoring inside the opening five minutes for the second time in as many games on Saturday night in a 4-1 win against Las Vegas Lights FC, that work appears to have been paying off handsomely as the club moved into ninth place in the conference standings and in prime position to continue its upward ascent after three wins on the spin.

“We came out of the blocks quicker, created that counterattack chance within seconds of the half starting so that was pleasing to see,” said STLFC Head Coach Anthony Pulis. “Looking back, we could have won by five or six. I thought we created some really good chances in transition and our decision-making and quality could have been a little bit better, but that’s me being extremely critical of the guys when I thought they performed well.”

The biggest highlight of the night for the hosts at Toyota Stadium – Saint Louis came from Kadeem Dacres, who produced an outstanding finish in the 11th minute to give the side an early two-goal cushion against its fellow playoff contender. Dacres’ curling strike to the top-right corner was the midfielder’s first goal of the club and provided a reward after a recent stint on the sideline he had been working to come back from in recent weeks.

With STLFC set for a busy week that sees Sacramento Republic FC visit on Wednesday night before the side heads to California to face Fresno FC on Saturday, Saturday’s level of performance is one Pulis hopes Dacres and the rest of the side can sustain as it looks to maintain its trajectory. 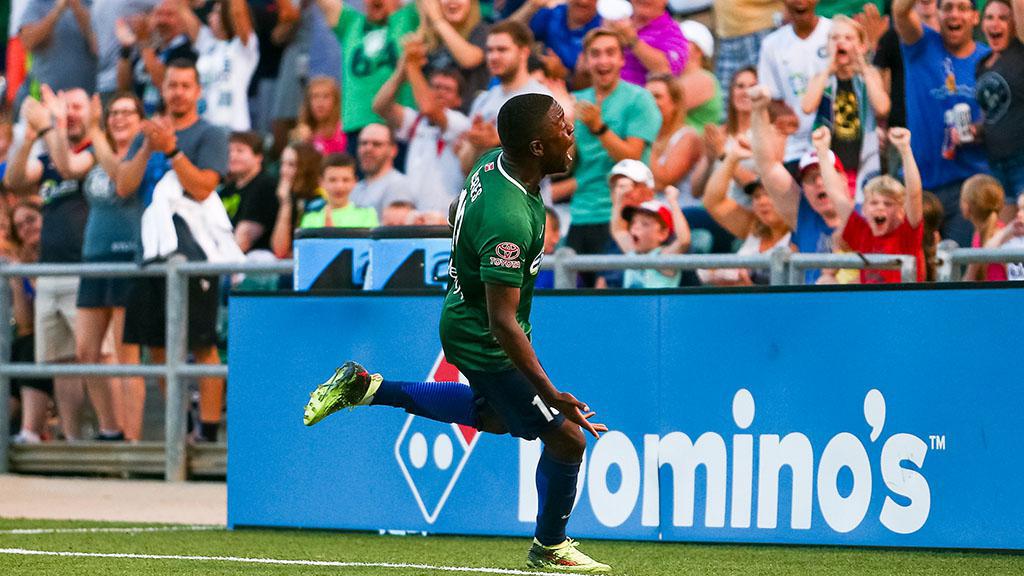 “Kadeem’s been excellent in training all week, hence why he got the opportunity to start,” said Pulis. “That’s the way we are as a group, that’s the culture, that’s the message that gets sent to the players. If you work hard every day and produce good performance in training then you’ll get opportunities in games and Kadeem was a prime example of that. I thought he was excellent tonight, first game in a few weeks after an injury, kinda coming back after not getting many minutes, took the goal extremely well, but it wasn’t just the goal, his all-around performance I thought was really good.”

PHOENIX FIGHTBACK FALLS SHORT: Phoenix Rising FC’s defensive ups and downs continued Saturday night as the side conceded four goals for the third time in the past five games as it fell 4-3 to Orange County SC at the Phoenix Rising Soccer Complex to drop to fourth place in the Western Conference standings after the end of the weekend.

And while there was certainly quality in Orange County’s finishing which saw standout performers Michael Seaton, Thomas Enevoldsen and Aodhan Quinn all find the net, Rising FC Head Coach Rick Schantz was disappointed at aspects of his side’s defensive work that gave the visitors opportunities to take advantage of.

“Each goal had their major breakdowns,” said Schantz. “On the first goal, we dropped off a little too deep and didn’t step to press and Seaton’s a good player, fair credit to Orange County, they’ve done a really good job this year and built a really strong roster, and we got punished for it and they scored some quality goals.

“I’ll have to go back and look at the film, but the third and fourth goals I was disappointed about because it looks like we let down. I expected more from our guys tonight, and if they played the whole game like the last 20 minutes then we’re gonna be alright.” 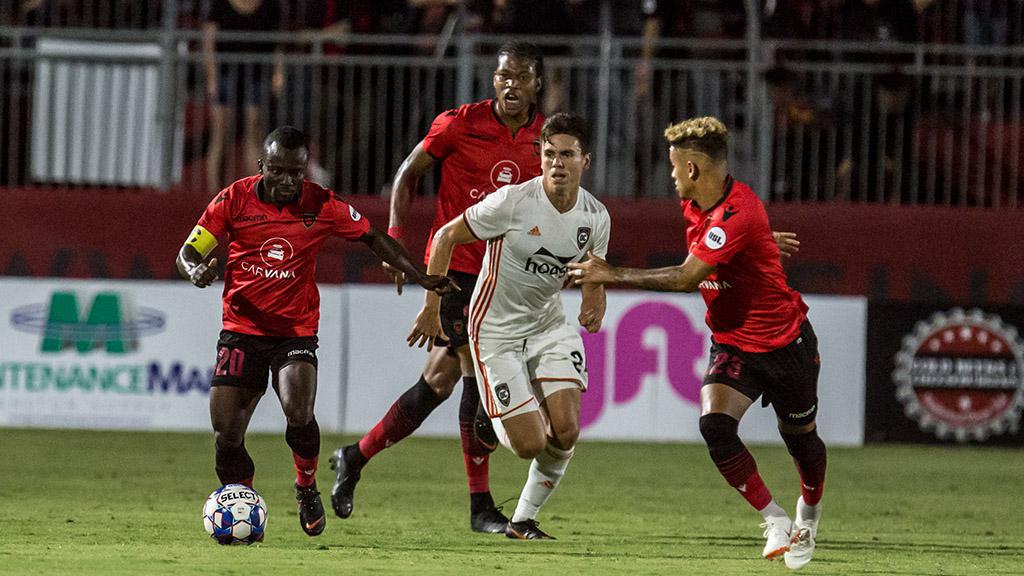 The fightback led by Solomon Asante’s hat trick in the final 22 minutes might have come up short, but it certainly provided the potential for the side to carry positive momentum into a busy week that kicks off on Saturday with a visit to Las Vegas Lights FC. But finding a greater level of consistency is going to be the biggest issue Schantz has to address before the side’s visit to Cashman Field as it continues to eye at least one home game in the 2018 USL Cup Playoffs.

“It’s who we are as a team right now,” Schantz said of the recent inconsistency. “It’s up and down like a rollercoaster, and we have to sort that out because it’s not gonna work if we get to the playoffs.”

AROUND THE WEST: Las Vegas Lights FC Technical Director Jose Luis Sanchez Sola didn’t mince words after his side’s loss in Saint Louis on Saturday night. “I have three days to convince my players that in order to be here in this league and on this team, you need both pride and love for yourself,” he said. “There is nothing in training or with our tactics to solve. It's going to be about honor.” … San Antonio FC saw its four-game winning streak come to an end on Saturday against Seattle Sounders FC 2 with a 3-2 defeat that left the side expecting much more. “We have to own up to our mistakes and work on them,” said SAFC goalkeeper Diego Restrepo. “We know we’re better than how we played tonight, so we need to go out on Wednesday and prove again why we’re a playoff team.”