Eastern Conf. Notes – Louisville Happy to Come Away with Win 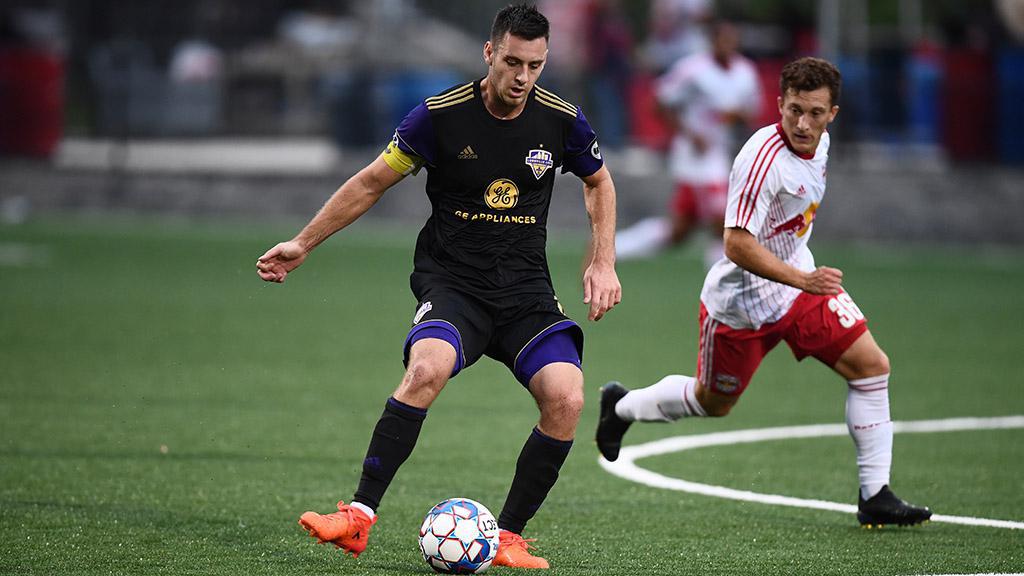 MONTCLAIR, N.J. – It’s safe to say Louisville City FC had never quite experienced a game like this past Friday night’s against the New York Red Bulls II, but after the thrilling 6-4 victory at MSU Soccer Park there was plenty for player-coach Luke Spencer to reflect on at either end of the field as his side retained fourth place in the USL Eastern Conference at the end of the weekend.

“On one hand, we’re happy to win the game, we’re happy to score as many goals as we did, Cam [Lancaster] had a hat trick, he was brilliant tonight, but at the other end we’ve got to be better defensively,” said Spencer. “We can’t concede that many goals, we’ve got to get back to focusing on shutouts because we’re not sure how many times we’re going to be able to score six goals. On one hand, we’re happy with the three points, but we know there’s a lot of room to improve.”

The game was one for the Louisville history book as the side equaled its biggest attacking output in a game with six goals, a number it had only notched once previously in a 6-2 victory against OKC Energy FC on June 27, 2015 at Slugger Field.

There were similarities to that contest three years ago on Friday night. Instead of Matt Fondy it was Cameron Lancaster recording a hat trick for Louisville as he moved into a tie for the league-lead with 13 goals this season. Ilija Ilic also had a pair of goals, replicating Magnus Rasmussen’s brace in the game against OKC, and the side also conceded the opening goal of the game.

With new Head Coach John Hackworth beginning his duties on Monday at the club, the focus for Louisville is now going to be fixed on getting things in shape for Saturday’s key game with Nashville SC at Slugger Field. As wild as the club’s third win in its last four game was, though, Spencer is pleased the side emerged on the right end of the result.

“Definitely,” said Spencer. “When you get to this stage of the season all the games are important. We’re taking it game by game and we’re happy to get those three points tonight.”

LEDESMA FOCUSED ON VICTORIES: FC Cincinnati’s Emmanuel Ledesma became only the second player in the USL’s modern era to recorded double-digit goals and assists with his 10th goal of the season on Sunday night against Penn FC, but the three points that goal brought in a 1-0 win at Nippert Stadium were more important to the standout midfielder following the game.

“It means a lot, but at the same time it means nothing because we have to keep working hard,” said Ledesma. “We have 11 games left, we have to look for the big goal [to win it all]. I’m not happy because I scored, but rather because we won, and it gave us three points.” 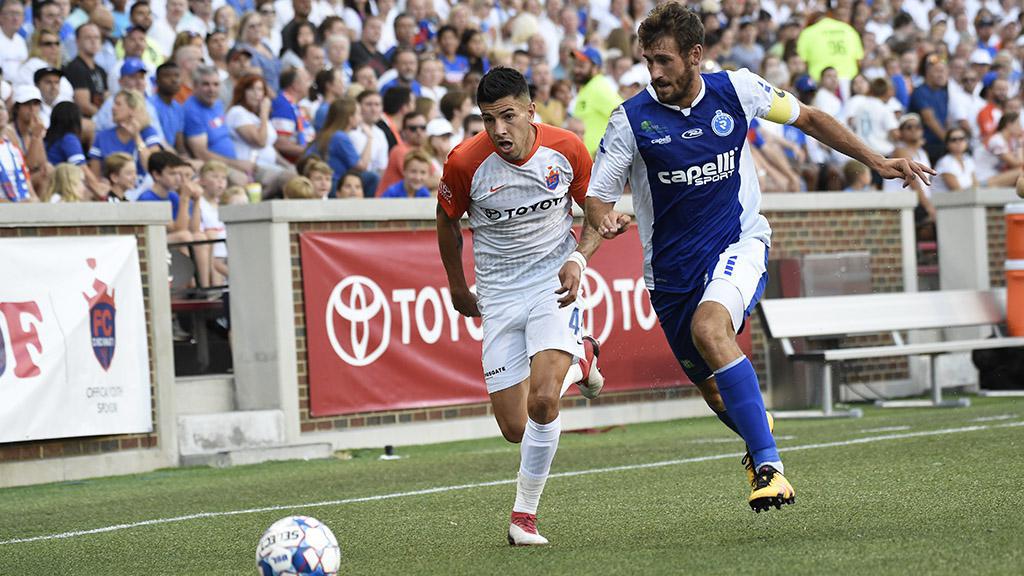 Ledesma has continued to burnish his reputation in Cincinnati this year and joined Irvin Parra – who accomplished the feat a season ago – in the landmark achievement as his goal with 10 minutes to go sent FCC into the lead in the race for the 2018 USL Regular Season Championship, one point ahead of Western Conference-leader Real Monarchs SLC.

Maintaining that advantage is going to be a challenge over the next month, though, with contests against the other sides currently in the top four of the Eastern Conference coming between now and Sept. 8. The third-place Charleston Battery visit Nippert Stadium this Saturday in arguably the biggest game of the weekend, while Cincinnati also plays host to Pittsburgh Riverhounds SC on Sept. 1 before visiting Louisville City FC for the final River Cities Cup clash of the regular season on Sept. 8. While the side still has a five-point cushion to the chasing pack, FCC Head Coach Alan Koch said there’s still work to be done to ensure that remains intact as the squad works to get back to full fitness.

“I think if we take ourselves out of the moment, which is the best way to deal with things in this business, it’s only natural that we’re not putting in perfect 90-minute performances right now,” said Koch. “It’s a long season and the number of players that we’re missing right now, it’s a huge challenge. And we don’t have everybody healthy.”

COLLINS CRITICAL OF ROWDIES' FITNESS: The Tampa Bay Rowdies saw their playoff hopes take another serious hit on Saturday night as the side suffered its fourth home defeat of the season in a 2-0 loss to North Carolina FC at Al Lang Stadium.

Coming off a run of three games in nine days, the Rowdies made four changes to the starting lineup from its midweek contest with the Charleston Battery, continuing the rotation the club has used regularly this season. For Head Coach Neill Collins, that rotation has been one of the issues the Rowdies have faced throughout the year, with the side having found difficulty in fielding a consistent starting lineup. 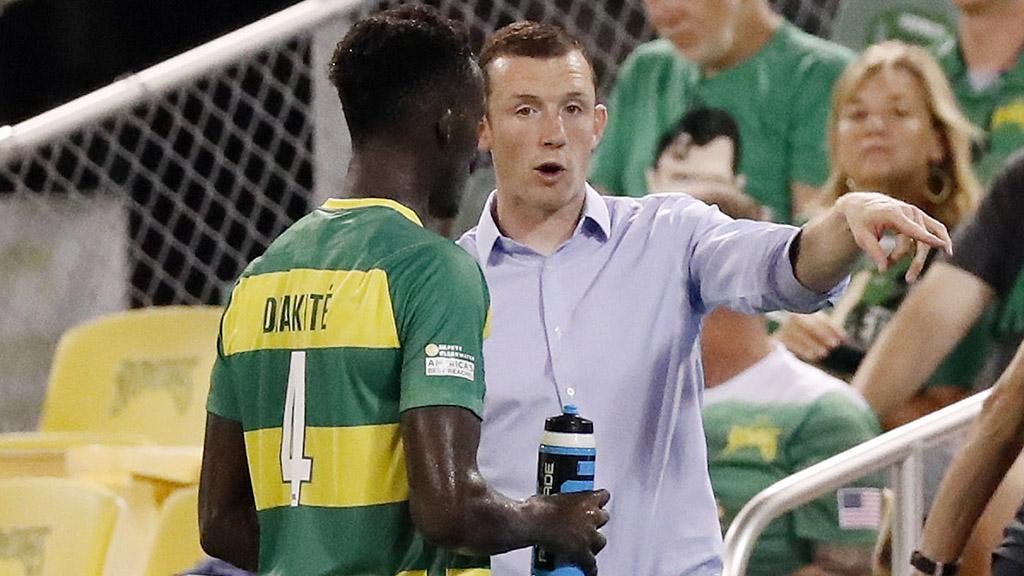 “I know physically we’re not fit enough,” said Collins. “We’ve not been fit enough from the first day of the season. We just don’t have players that are able to do it week after week after week. You look at the top teams in this league and the same players play all the time, give or take. Charleston very rarely changes its team. We have to change because we just don’t have players that are robust enough to go.”

While injuries and squad turnover have had an impact on Tampa Bay’s depth, only one player in the club’s squad – Hunter Gorskie – has logged more than 1,900 minutes or 90 percent of the club’s potential minutes this season. Second-highest on the side is veteran midfielder Joe Cole at 1,464 minutes, which stands at 70.7 percent of the club’s potential minutes 23 games into the regular season. With the side now five points out of the playoff places with 11 games to go, the Rowdies will need a big stretch run to put themselves into the playoff picture from here.

“I’m saying we’re not fit enough to play the same players 90 minutes game after game after game,” said Collins. “That’s a fact. Some players may say they are, but I can show you statistics that prove that they’re not. It’s something that we need to try and remedy.”