HERRIMAN, Utah – With only one win in July, and having conceded a season-high four goals in its last outing, Real Monarchs SLC entered Saturday night’s top-two Western Conference showdown with Phoenix Rising FC wanting to produce a strong response and reaffirm its position at the top of the standings.

In taking a 4-1 victory against their nearest rival with a pair of goals in either half, the Monarchs got exactly what they were looking for as they stretched their lead in the conference to six points and moved level with Eastern Conference-leader FC Cincinnati on 44 points in the race for the USL Regular Season Championship.

“We came out on the front foot and I thought for the majority of the game we were taking it to them and it could have been more than four,” said Monarchs forward Chandler Hoffman. “Really happy to score, it’s been a couple games for me, usually when I score they start coming so it’s a great sign going into the heart of the season.”

The trio of Hoffman, Sebastian Velasquez and Maikel Chang were difference-makers on the night, with Velasquez’s goal to open the scoring in the 37th minute off a clever piece of interplay with Chang on the right continuing his recent run of goals. Taking advantage of an opening that came when he drifted away from his tracking midfielder after finding Chang on the right side, Velasquez picked out the perfect position in space near the top of the penalty area for Chang to send the ball back and picked out the top-left corner of the net for another vintage finish. 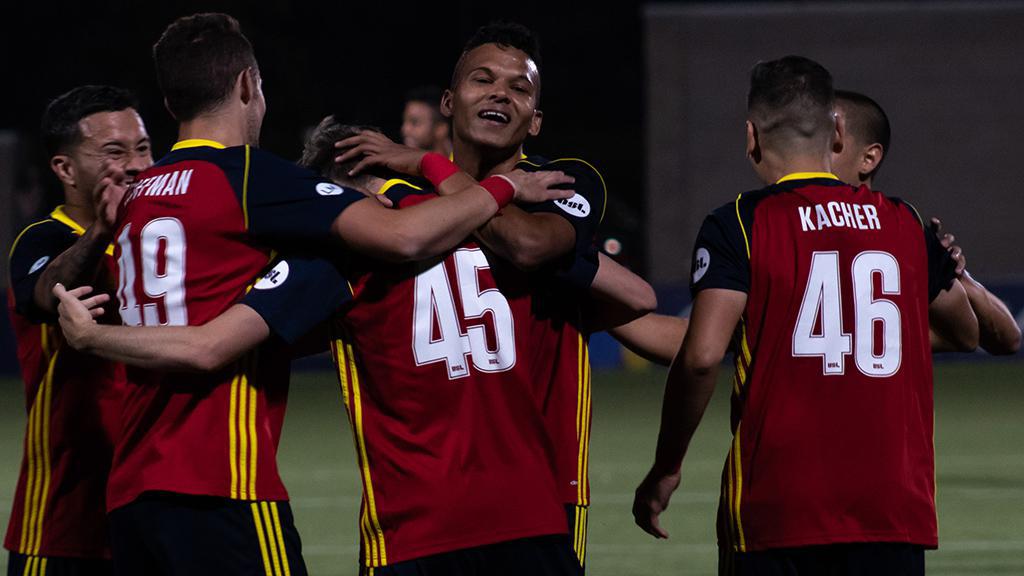 When the Monarchs added to their lead six minutes later as Chang sent a low cross into the penalty area for Hoffman, only for Rising FC defender Mike da Fonte to turn it into his own net before the ball reached the standout forward, it was a major blow for the visitors, who had missed out on opportunities of their own prior to Real taking the lead.

“Honestly the big difference, especially in the first half, I thought we created more chances and we were just missing that final pass or that final finish,” said Rising FC forward Chris Cortez. “There were a couple balls or a couple crosses that were a yard or two off, a couple chances in front of goals and we were punished for it. Really there was only one or two actual chances created by the Monarchs and one goal, which happens, that’s part of it, it happened to them as well. There was a ton of chances created by them, but they took advantage and we didn’t in the first half.”

When the combination of Phoenix’s Gladson Awako being sent off just past the hour mark was quickly followed by a finish by Hoffman to make it a three-goal lead, the Monarchs had reestablished themselves as the team to beat in the Western Conference. After the club’s tough recent stretch, it certainly felt positive to enter a rematch on August 8 with a Reno 1868 FC side that handed Real a 3-0 defeat when they first met this season with a strong display under its belt.

“When we go to Sacramento or to Reno, which are two top teams, everyone expects us to get three points,” said Hoffman. “That’s great for our group; it shows the commitment and the quality that we have. We were really disappointed that we dropped points, especially in San Antonio or our performance in Reno. Now, especially with these games coming up, we wanted to really separate ourselves from the pack.”

With the Monarchs now on an eight-game winning streak at Zions Bank Stadium, and undefeated in 10 games overall at home this season, Real’s homefield advantage is arguably the best in the league.

“They know that when we play at home, things have to be different,” said Monarchs Interim Head Coach Jamison Olave. “You’re not allowed to lose at home. Hopefully it stays the same, but winning at home, we are going to be okay going into the playoffs.”