CHARLOTTE, N.C. – As the Charlotte Independence replenished their squad this offseason, some of the new recruits may not have known everything about the club they were joining, but there was certainly one person that everyone was aware of as they arrived for preseason training.

“Coming into the season the one player that we really knew about was Jorge,” said 22-year-old rookie Kevin Areman this week, “just because of his success in the league and because he is approaching a goal-scoring record that is really remarkable.”

Jorge Herrera is a combination of the face of the franchise for the Independence, and arguably the most enduring figure over the past decade years in Charlotte’s soccer scene. As he prepares to make his 100th regular-season appearance for the Independence on Saturday night when the club hosts Penn FC in a key game in the race for the 2018 USL Cup Playoffs at the Sportsplex at Matthews (7:30 p.m. ET | Match Center | ESPN+), the 37-year-old Colombian remains at the top of his game with 10 goals this season, putting him firmly in the conversation for the USL Golden Boot at the end of the season.

At an age when the game has long-since passed many of his old contemporaries from the early years of the USL’s modern era, the dedication Herrera has shown has led the way on the field and off for the Independence as they have grown as a club over the past four seasons.

“Jorge has clearly been the face of the franchise from day one and has been nothing but class for us,” said Independence Mike Jeffries. “It says a lot about him, and Jorge still comes out every day and works extremely hard. He takes good care of his body and keeps himself fit. He has been fantastic again this year in terms of getting on the end of plays and finding ways to create goals for us.”

That dedication has been passed on to his teammates – young and old – who have seen Herrera as a model for what a professional should be.

“Obviously, I play a different role and we play different positions but from an attacking standpoint, the guy is just ruthless,” said Areman. “He can run all day, his pressure defensively is just incredibly, his soccer IQ is off the charts, so he really knows what he is doing and what he wants out of everybody. He pushes everyone to another level.”

For Herrera himself, though, there remains a humbleness about the way he looks at his own game and his place in the league’s history. Closing in on 200 regular-season appearances overall in the USL’s modern era after his exploits with the Charlotte Eagles between 2011 and 2014 and sitting second to Dane Kelly in the league’s scoring list over that span, there have been lots of highlights since pulling on an Independence jersey for the first time.

“There have been a lot of great memories,” said Herrera. “Our first game as a club, when I scored my first professional hat-trick against Saint Louis FC and battling out wins against tough opponents. It has been a good ride with the Independence so far.” 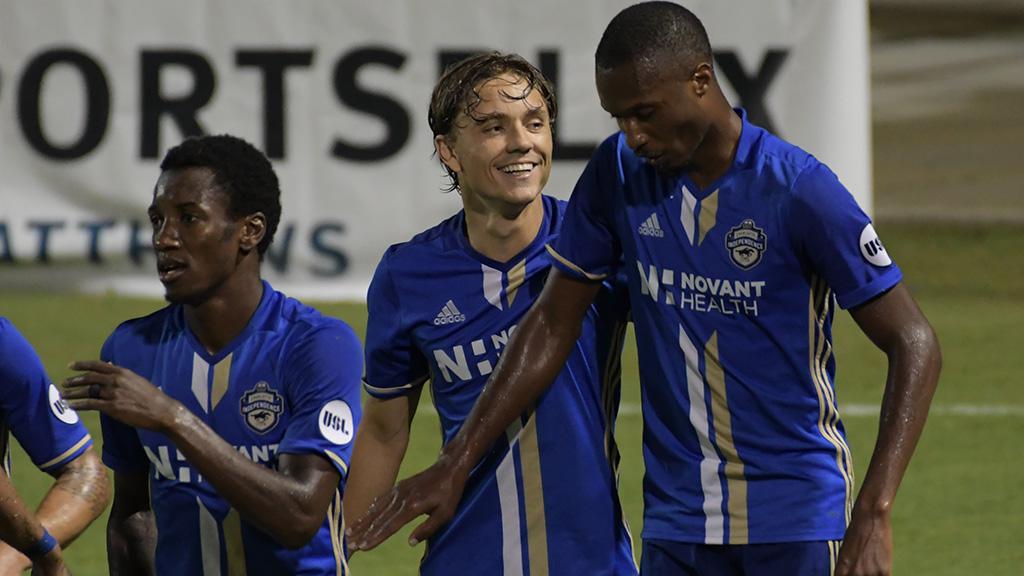 With that experience, there’s plenty for Herrera to pass on to his teammates as well, especially those like Areman who are at the start of what they hope will be a long, fulfilling career.

“The advice that I would give is that they have to enjoy every day of their career because, believe it or not, it goes quick,” he said. “I remember when I started and can't believe it has been such a long time. For a player like Jake, just be focused and take care of the opportunities that show up and be ready for it.”

With the Independence in the middle of a battle for a third consecutive trip to the USL Cup Playoffs, continued contributions from Herrera in the final third of the season are going to be key. As the club celebrates his career so far on Saturday, though, his teammates are hoping they can help ensure Herrera’s latest landmark day is a successful one.

“Our motto here is that we are family so when someone is about to achieve a milestone like that it's special to all of us,” said veteran Independence defender Henry Kalungi. “Jorge has earned and deserved everything that he has done so we are happy for him and we will be there to celebrate with him. Hopefully, we get the result to go along with his 100th appearance.”