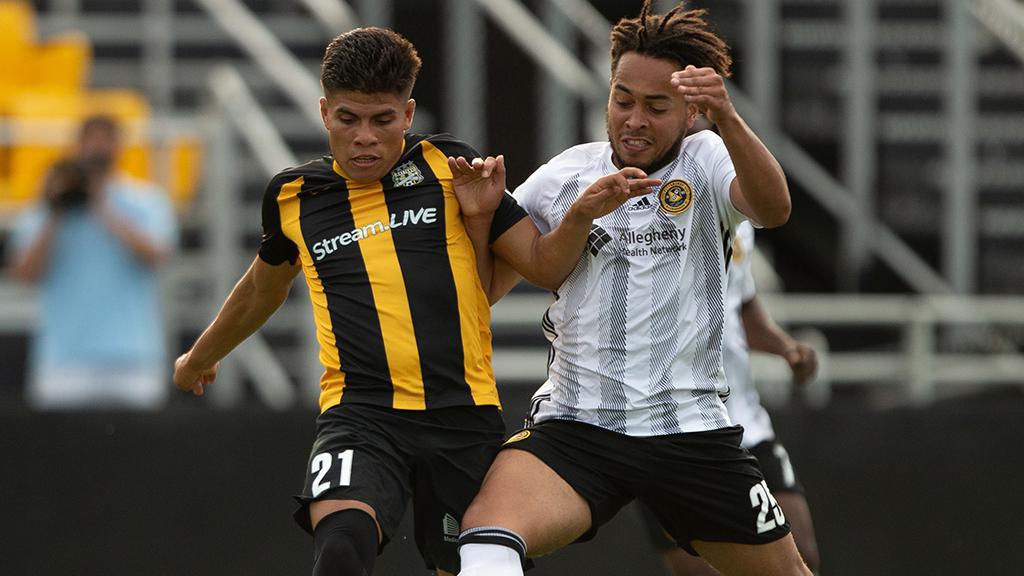 PITTSBURGH – With the stingiest defensive record in the USL, Pittsburgh Riverhounds SC has made life difficult for opponents this season in its defensive third, but on Saturday night in a top-three Eastern Conference matchup against the Charleston Battery (7 p.m. ET | Match Center | ESPN+) the hosts want to use its defensive pressure to create attacking chances in the smaller dimensions of Highmark Stadium.

“I didn’t think we got pressure on the ball in the offensive third, so here on this short field I think that’s the key for us this weekend,” said Hounds midfielder Kenardo Forbes. “That’s what we’re focusing on in training – to get higher up the pitch so we can steal the ball and we get easier chances.”

The teams played to a 0-0 draw at MUSC Health Stadium on June 23, with the result having helped sustain the undefeated streaks both sides currently find themselves on. The Battery haven’t suffered defeat since June 9, a run of six consecutive games that included victories on home turf in Week 18 against both Indy Eleven and Louisville City FC.

Riverhounds SC has that streak matched, although its run stretches all the way back to May 30 when the side suffered its only setback of the season so far against Nashville SC. With the teams separated by two points going into Saturday night the game could be a pivotal one in the race for seeding in the USL Cup Playoffs, which has the Battery aiming to match not just the intensity the hosts will bring before their home fans, but also apply pressure of their own in pursuit of a move into second place.

“I think a big thing for us is going to be to try to get at them and put them under pressure,” said Battery Head Coach Mike Anhaeuser. “Try to get some free kicks and chances in their end to put them under pressure, because teams haven’t really been able to do that. I think Louisville did it a little bit at the end of their game with Pittsburgh at home and really turned them. I think we need to do that.”

CINCINNATI TREAT FOR NEW YORK: There’s rarely been a lack of goals when FC Cincinnati and the New York Red Bulls II have squared off in recent meetings with the sides having combined for 13 goals in their last three meetings, and for the Red Bulls II there’s an added sense of anticipation as they prepare to visit Nippert Stadium on Saturday night (7:30 p.m. ET | Match Center | ESPN+) for the second meeting between the clubs this year.

“Any time it’s a big game like that when a lot of fans come out, I think it’s really exciting especially for a lot of guys who aren’t really used to that,” said Red Bulls II forward Amando Moreno after Wednesday night’s 2-1 victory against Bethlehem Steel FC. “I think it’s going to be a great experience for us, especially me, I’ve never played against Cincinnati and I heard a lot of people go to their games so I’m pretty excited about it.”

Moreno scored his ninth goal of the season in New York’s victory against Steel FC, which moved the side into fourth place in the Eastern Conference as it completed a perfect three-game homestand. That’s given the club a nice cushion on the teams below the red line as it looks to maintain its streak of reaching the USL Cup Playoffs in every season of the club’s four-season history and has also helped build up some confidence that will be needed when visiting the Eastern Conference leaders.

“We’re looking sharp,” said Moreno. “I think today we played a great game, despite the goal I think we had a lot of great chances we were kind of dominating. So, I think we’re looking good and if we just keep playing the way we’ve been playing I think we’re going to get a good result in Cincinnati.”

HUME READY FOR REUNION: After spending a season in Canada’s capital last year, Nashville SC forward Tucker Hume is looking forward to a return trip to TD Place on Saturday when his new side faces Ottawa Fury FC (7 p.m. ET | Match Center | ESPN+) in one of the key games around the Eastern Conference’s playoff line this weekend.

Hume had three goals and two assists for Ottawa a season ago, with two of his tallies coming at TD Place. Having caught up with his former teammates this preseason, getting the chance to play against them is a prospect the 6-foot-5 forward is looking forward to.

“Yes, definitely,” he said. “Most of the guys stayed there from last year, especially the Canadians. We saw them down at IMG and it was good seeing them again. I’m excited to be going up there and saying hi to them again.”

Nashville is looking to rebound from the end of a 1-0 defeat to the Charlotte Independence last Wednesday night in its most recent outing. Now sitting in seventh place in the Eastern Conference, NSC Head Coach Gary Smith has tried to use the time to refocus the side, which is 1-2-1 over its last four games after the end of a lengthy undefeated streak.

“It’s not that we’ve been playing poorly, but certainly to win games you have to be laser focused,” said Smith. “Players have got to be at their sharpest and best and in an extremely tight vision. We just have fallen off the peak that we were on in that 12-game unbeaten run, and we can get back to that.”

With Ottawa coming off a 1-0 loss on Wednesday night in the Semifinals of the 2018 Canadian Championship, Fury FC is also looking for a bounce-back display. Add that the hosts sit only three points behind Nashville in the Eastern Conference and the visitors are expecting a challenging matchup.

“Ottawa have done a great job after a really rough start of being one of the most competitive teams in the league,” said Smith. “They give up few goals, they’ve got a home field that is not easy to play on or at. It’s a turf field, they play it well and have a particular mind set and style about them and I think they’ve really gotten into a groove in that aspect. … I’m not expecting anything but a tough encounter.”

AROUND THE EAST: There’s very little doubt for North Carolina FC captain Austin da Luz on how important his side’s contest at home to Toronto FC II on Saturday night is to the club’s playoff hopes. “We’re at the point where, if we don’t start picking up three points at home consistently, we’re going to be on the outside looking in at the end of the season,” he said. “So, this is a must-win.” … Sitting directly below NCFC in the Eastern standings, Richmond Kickers and ATL UTD 2 are in a similar situation as they square off on Saturday at City Stadium, with the Kickers hoping the progress they’re making under new Head Coach David Bulow in practice will be in evidence on the field. “I feel like we have a clear understanding,” said Kickers defender Mekeil Williams. “The guys are really gravitating towards it and trying to build on it.” … The Charlotte Independence’s Jorge Herrera and Bilal Duckett could both make their 99th league appearances for the club on Saturday night when the side visits Louisville City FC. Herrera and teammate Cordell Cato have combined for 17 goals this season, second only to FC Cincinnati’s Danni Konig and Emmanuel Ledesma in forward tandems.