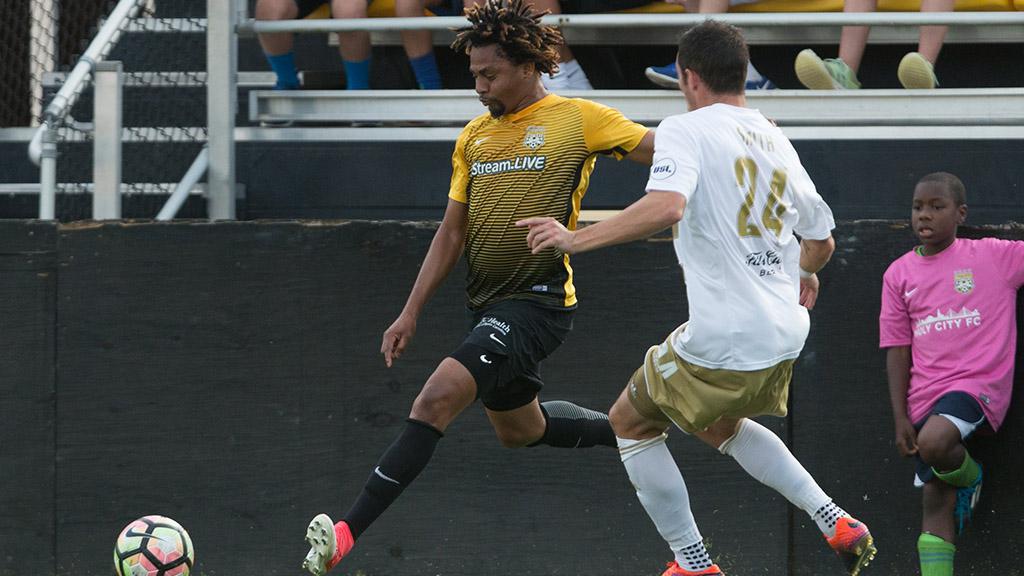 CHARLESTON, S.C. – Entering the weekend’s action sitting level on points in the USL Eastern Conference, the fourth-place Charleston Battery and third-place Louisville City FC face off on Saturday night at MUSC Health Stadium (7 p.m. ET | Match Center | ESPN+) in a match which could have big implications for the USL Cup Playoffs.

“Saturday is going to be a big one,” said Charleston Battery Head Coach Mike Anhaeuser. “We have to regroup from Wednesday and turn our attention to Louisville. Luckily, we were able to rest some guys. We’re playing Louisville, they’re the reigning champions, so it’s going to be a great game.”

In the middle of a five-game unbeaten run after Wednesday night’s 2-1 victory against Indy Eleven that saw Gordon Wild score both goals for the hosts, Charleston will be coming into the game in form. The Battery have suffered only one loss at home this season, the Battery have been typically hard to beat at MUSC Health Stadium, having lost only three times on home turf overall since the start of the 2017 regular season. The Battery stand as the lone side to have reached the USL Cup Playoffs in every season of the league’s modern era, with their home record a major factor in that.

“If you can win nine or ten games at home, you’re going to have success in this league,” said Anhaeuser. “That’s what we’re trying to do. We’re going to keep our focus and our defensive passion and push for another win on Saturday. The guys are doing a great job because this is a tough time in the season.”

One advantage that Louisville will have coming in is having not played on Wednesday night, which given the team’s stellar Lamar Hunt U.S. Open Cup run has been a rarity this season. That has given the side, fresh off the introduction of its new coaching triumvirate of Luke Spencer, George Davis IV and Paolo DelPiccolo, a week to work on things ahead of the crucial game.

“It’s great for us. You know the Wednesday-Saturday’s a real grind, especially with the limited squad that we have right now. So, for us to get a full week of preparation in is really, really good for us,” said DelPiccolo. “They’re always big weekends. We always say it’s a big weekend coming up, so it’s a good chance for us, good game to keep us going. Charleston’s a good team, so something that we really need to be ready for.”

PENN FC READY FOR CHANGES: Monday night was a tough outing for Penn FC, which saw its six-game undefeated streak come to an end in a 2-1 defeat to the Richmond Kickers despite outshooting their visitors 22-5. The team is looking to quickly turn that shot conversion around when it travels to play Ottawa Fury FC on Saturday afternoon at TD Place (2 p.m ET | Match Center | ESPN+).

“We’re doing okay, we just need to put the ball in the back of the net,” said Penn defender Ken Tribbett. “We have the precision, tonight was just one of those nights where they just don’t go in. I personally should have had three or four goals, could have been one of those nights but it just wasn’t going in for us.”

One of the key aims for Penn on Saturday is to score the opening goal of the game, which it has failed to do in three of its last four outings. Against a side in Ottawa that has defensively been difficult to rally against – Fury FC has scored first in all six of its victories this season, including a 1-0 victory against Penn on May 7 – getting on the board quickly will be key as the side looks to move back into the top eight in the Eastern Conference.

“We have been coming from behind lately and we are trying to change that,” said Penn forward Lucky Mkosana, who despite the defeat on Monday still recorded his seventh goal in the past five games. “Get an early goal and change the pace of the game.”

Saturday’s match begins a seven-game road run for Penn FC, serving as a crucial moment in the club’s regular season as it looks to return to the USL Cup Playoffs for the first time since 2014.

“We’ve proved we can win games on the road, but distance and travel aren’t easy so it’s going to be a challenge but we have to make up for the loss today and get those points back,” said Penn Head Coach Raoul Voss. “It’s important to be in a playoff spot on October 14th, that’s what really matters. You know we’re going to have those seven away games and then nine home games so we know it’s not going to be like what it’s like at the end, we want to catch up but we’ve got to stay connected to the playoff spots, so yeah it’s going to be a challenge, it’s a tough league, every game is a challenge.”

CRUCIAL CLASH LOOMS FOR ROWDIES: It’s been a tough run of late for the Tampa Bay Rowdies, who have taken just one win in their last six matches, and suffered two home losses to drop to 11th place in the Eastern Conference standings. All of that makes Saturday’s match on the road against FC Cincinnati at Nippert Stadium (7:30 p.m. ET | Match Center | ESPN+) a  on the side needs points from if it is to get back on track for a place in the USL Cup Playoffs.

“We need to get a positive result, especially coming off a tough one at home against Louisville,” said Rowdies Head Coach Neill Collins. “With that being said, Cincinnati are top of the table for a reason. They are a very talented squad and I am sure they’re hard to beat at home as they feed off of their fans energy. We need to go in and establish our game plan, which we’ve worked hard on this week.”

The match at Nippert Stadium will have the ever-present atmosphere that the Eastern Conference-leaders have become known for. FCC leads the USL with an average crowd of 24,953 this season, but the Rowdies are looking forward to the opportunity to visit a venue where they earned a 1-1 draw in their first trip to Cincinnati last season.

“The atmosphere on Saturday will be one that every player enjoys playing in. They’ll have a huge crowd and I know we’ll be ready for that,” said Collins. “We’ve had players that have played at very high levels so I am looking at them to rise to the occasion.”

With a three-point deficit to make up on the eighth-place New York Red Bulls II after losing at home last week, the Rowdies are determined to get back on track. That has been reflected in the hard work done on the training pitch through the week to prepare for this match.

“We have worked hard this week after losing to Louisville and every player knows that they’ll have a chance to impact the game,” said Rowdies forward Georgi Hristov. “We have plenty of experience on our team and we’ll be looking to use that to go fight for the win.”