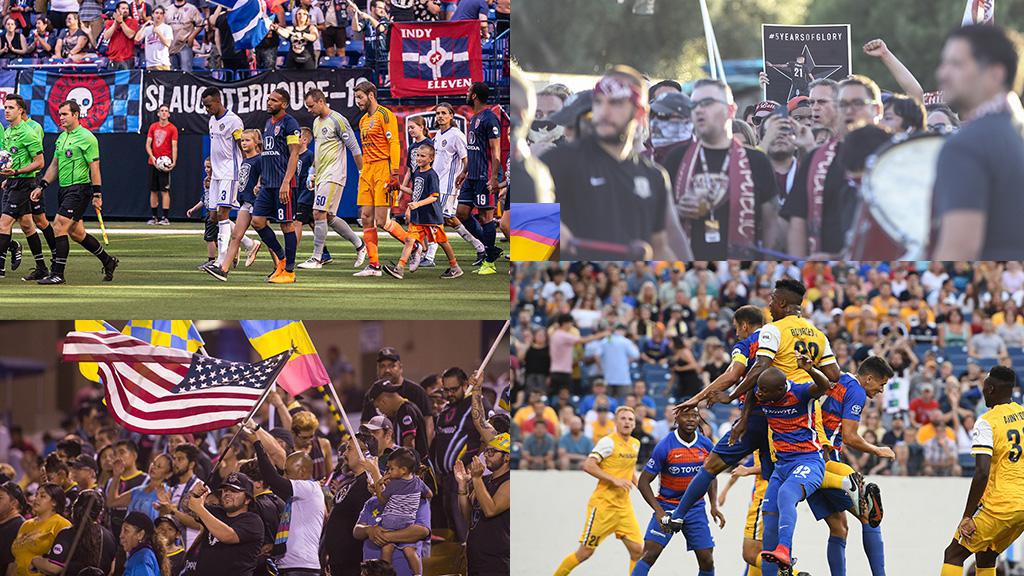 TAMPA, Fla. — Attendance continued to soar across the USL as the league welcomed the second-highest weekly attendance in its modern era over the past seven days, as the 2018 USL regular season reached its official midway point on Saturday night. Almost 117,000 fans saw a remarkable week of action, surpassing the 111,730 fans that witnessed the prior week.

Having welcomed more than 110,000 fans in three of the past four weeks, the USL is set to surpass 1.5 million total attendance over the coming week, keeping the league on course to set another single-season record for total attendance that is likely to approach three million fans, an unprecedented figure in North American soccer history for a Division II league.

“The exciting combination of the USL and the Fourth of July holiday proved to be a great draw for fans across the country,” said USL President Jake Edwards. “Fan response at the gate is the result of the hard work by all our club and league staff, with attendance increases being seen in nearly every USL market. The fans are the lifeblood of our league, and we are grateful for their ongoing support. With playoff races starting to heat up, fans are feeling the intensity increase across the league and we expect this record attendance pace to continue throughout the coming months. We are delivering an exciting brand of professional soccer and creating a thrilling soccer environment across the league.”

The USL welcomed its second-highest week of attendance in its modern history during Week 17 of the 2018 regular season as fans came out in droves for big contests across the country.

Indy Eleven continued its outstanding first year in the USL, as almost 21,000 fans attended the club’s pair of games at Lucas Oil Stadium in the past seven days, while Nashville SC’s first meeting with FC Cincinnati also brought a bumper crowd of 18,228 fans to Nissan Stadium that saw both sets of fans provide a memorable atmosphere. Sacramento Republic FC’s sellout crowd of 11,569 fans that celebrated the club’s fifth anniversary season also topped five figures, while Eastern Conference contender Pittsburgh Riverhounds SC drew its biggest crowd of the season at Highmark Stadium for the club’s now-traditional Fourth of July contest.

This is the fourth time overall in 2018 season the USL has seen more than 100,000 fans attend games over a seven-day span, a mark that had not previously been surpassed in the league’s modern history. Week 17’s action saw the league average 5,560 fans per game across its 21 contests overall, with the league’s independent clubs averaging 6,459 fans over 17 games in the past week. Those figures kept the league's overall average for the 2018 season to almost 5,000 fans per game and raised the season- average for independent clubs to nearly 6,000 fans per game.