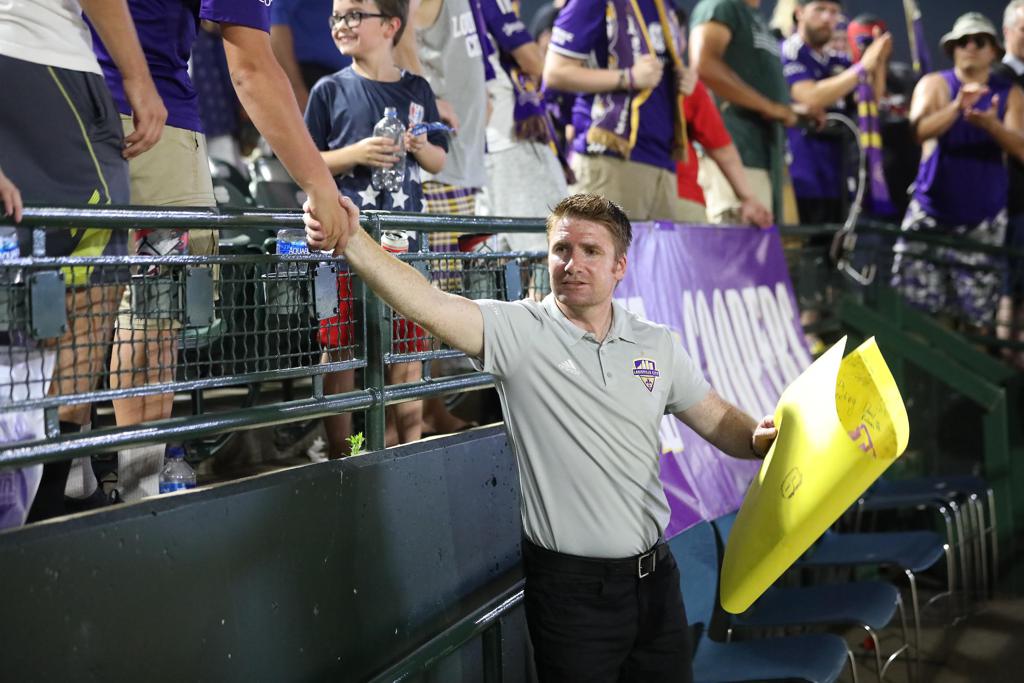 LOUISVILLE, Ky. — It was an emotional night at Louisville Slugger Field on Saturday as Head Coach James O’Connor said farewell to the club before heading to Orlando City SC of Major League Soccer, where he will be taking over the Head Coaching position. The only Head Coach in Louisville's history, O’Connor led his side to the USL Cup in 2017 and leaves big shoes for fill for his successor.

For O’Connor, joining Orlando is something of a homecoming, The Lions were O’Connor’s last club as a player, having played for the team in the USL from 2012-14. It was also the club where he had his first coaching role, having acted as an assistant from 2013-14 before moving to the Derby City for his first Head Coaching position.

“Yeah, I think when you look at – it’s not just the MLS,” said O’Connor. “I think it’s a lot more for me. Orlando has such a special place in my heart. It’s where I first came to – Orlando. It’s not MLS.”

Despite the timing being not ideal, leaving almost at the midway point of Louisville's season, O’Connor is confident in the future of the club. After a 3-3 draw against the New York Red Bulls II on Saturday night thanks to Magnus Rasmussen's stoppage-time equalizer, Louisville is fourth in the USL Eastern Conference and also has a Lamar Hunt U.S. Open Cup Quarterfinal against MLS side Chicago Fire on July 18th in the near-future.

“I think tonight’s the night to celebrate the players of Louisville City. I think when you look at the players that have been here throughout the years, you look at the quality they’ve got, they’ve got a quarterfinal now against Chicago in the Open Cup,” said O’Connor. “They’ve got excitement with the new stadium. It’s a huge platform to be able to build off and spring forward. My hope is that they go on and excel as they have done at times here and go on to better things as I’m sure they will.”

BETHLEHEM OFFENSE TOO POWERFUL: Bethlehem Steel FC came alive on Saturday night, scoring four goals for just the second time of the season in a 4-1 win against the Charlotte Independence. One of the stars of the match was Steel FC midfielder Drew Skundrich, who recorded his first professional goal and assist in the match.

The victory pushed Bethlehem back into the playoff positions in the tightly-packed Eastern Conference standings, just a point back of the Independence as the teams sitting between third and 10th place in the standings sit separated by just four points as the midpoint of the season approaches. For all of Steel FC's attacking prowess, which saw the side pull away in a three-goal second half, Skundrich believed the defensive work the side put in when Charlotte tried to build through the midfield helped fuel the side's successful outing.

“We did really well and I think our offense stemmed from our defense. We were pressing really high up the field and created some turnovers that created chances for us,” said Skundrich. “As the half went on, we had a good spell of possession but we could have kept it and created even more chances. We just need to get better at that.”

The last meeting between the sides at Goodman Stadium saw the Independence run away 4-0 winners, so this match provided something of a redemption for the hosts. With the side now on a five-game undefeated streak ahead of a key game on Friday night against Penn FC, maintaining the energy the side produced against Charlotte will be important as the push for a second consecutive playoff bid continues.

“We talked about being energetic and that paid off in the end. I thought it was an energetic performance but also a mature one, we recognized that we needed to keep the ball because they are a very good possession-oriented team,” said Bethlehem Head Coach Brendan Burke. “[Independence Head Coach] Mike [Jeffries] has them well coached and I thought as the second half wore on, we did a really good job of putting our foot on it and recognizing when to go and when to hold it.”

NASHVILLE MAKING ITS OWN HISTORY: After suffering its first home loss of the season to Indy Eleven last Tuesday night, Nashville SC responded perfectly as it took a 3-0 win against ATL UTD 2 on Saturday in front of another sellout crowd of 8,815 fans at First Tennessee Park.

“As I’ve said many times, we’re finding out and creating history ourselves. This is our first season, so we’ll look back on this and we’ll be able to say ‘do you remember that and how you responded?’” said Nashville Head Coach Gary Smith. “I could never be sure, but I felt from Tuesday, more so obviously when we met again Wednesday up until yesterday when we finished training that the guys were focused, there was an appetite again to really put the record straight”

Coming back from a midweek loss to get a big win on Saturday requires mental toughness, and that was where Smith felt that his team got its win.

“I felt from start to finish, we had the right attitude, attacked the game from the outset, which was very much a point that was put across in the days between a defeat here to Indy on Tuesday and today,” said Smith. “I just felt we’d come away from what we were about and what we've created. Those opening exchanges showed again that the dynamic of the group, purposeful play, energy, spirited, not just individuals, but spirited teamwork found some reward against a talented young side.”

One of the big performances in the match was midfielder Alan Winn, who recorded a goal and assist on the first two goals. That came after plenty of time away due to injuries and being rested but the former PDL standout made a strong case for full inclusion moving forward in a competitive attacking group at Smith's disposal.

“It feels good. It doesn’t matter if it’s coming off the bench or starting there’s no difference really, I just have to play my game,” said Winn. “There are certain reasons players start and don’t start and that just comes with sports. I’m grateful for the start and hopefully moving forward, whether I start or not, I can help the team out.”