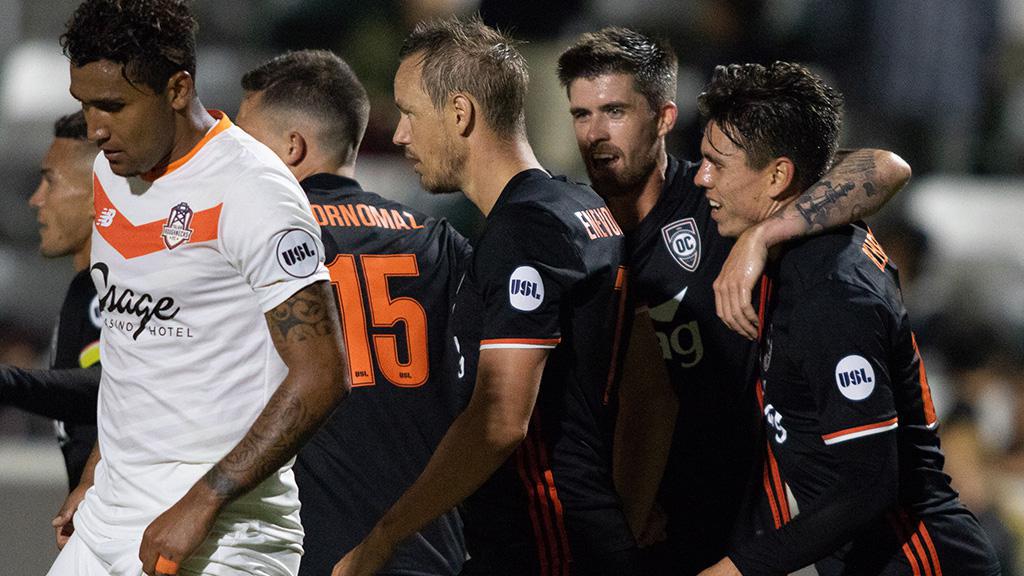 IRVINE, Calif. – With six different players finding the back of the net in a 6-1 win against Tulsa Roughnecks FC on Saturday night at Champions Soccer Stadium, the Orange County SC attack exploded for its biggest output of the season as the club's progression toward a place in the USL Cup Playoffs continued in impressive fashion.

In almost emulating a 5-0 victory against the same opponent earlier this season, Orange County's attack remained relentless, which allowed players like Mats Bjurman to put the icing on the cake as he came off the bench to score his first goal of the season in the final minute.

“I am very happy that Mats got his goal. It was definitely well deserved. Mats is one of those players that every coach loves and wants on their team,” said OCSC Head Coach Braeden Cloutier. “Fantastic attitude, work ethic and can play in multiple positions. Mats is another example of the type of character that we want here in Orange County, very selfless and a great teammate.”

It was that kind of night for Orange County who also saw Amirgy Pineda scored his first professional goal late on in the victory as he made his first appearance of the season. After 15 appearances a season ago that saw the midfielder log 833 minutes for the club, Cloutier was pleased to see the 21-year-old local standout get the reward for his patience.

“I am extremely happy for Ami,” said Cloutier. “He has been the most selfless and most positive teammate I’ve seen in quite some time. Ami has been training very well and has been patiently waiting for his opportunity. Unfortunately this season, he has quite a few guys ahead of him that have been solid and have played the bulk of the minutes, but he keeps training hard, supporting his teammates and took his opportunity tonight. You could see how much it meant for the rest of the team when he scored, what he means to the team!”

NO REGRETS FOR LIGHTS FC: With stoppage time almost up on Sunday afternoon, Las Vegas Lights FC won a penalty kick, seemingly pushing it to what would have been an impressive comeback to earn a road draw with the Swope Park Rangers. But a trick play between Carlos Alvarez and Sammy Ochoa turned into a busted flush as Ochoa hit the post after Alvarez's tapped start to the sequence that allowed the Rangers to walk away with all three points.

But despite the big impact on the result, and potentially Lights FC's season, the missed opportunity caused, Las Vegas Head Coach Isidro Sanchez was pleased that his players rolled the dice on the opportinity.

"That's a play we've been looking for, practicing since the first week [in January]," Sánchez said. "This is a risky play, and most teams who do it, do it when they are winning 4-0 or 5-0. For me, that's just bullying or taking advantage of the opponent. You have to practice it and have courage to make it in these kinds of moments. It showed that this team is brave."

For Sanchez, the dramatic near-comeback reflected how he wanted his team to play, even if the end result wasn’t what he was looking for.

"As a coach, my biggest objective is to have 11 players on a team who represent what I am – I think I am a disciplined person who puts forth a lot of effort and never gives up. Today, in my team, I saw exactly the same," said Sanchez. "They stuck to the game plan, were very disciplined and never gave up.”

Despite feeling happy with the team’s play, Lights FC still took no points from the match and are quickly losing pace in the USL's Western Conference. Now sitting seven points back of eighth-place Colorado Springs Switchbacks FC as the halfway point of the club's inaugural season, Sanchez  knows his side can’t keep settling for performances that produce only pride.

"I was proud of the effort. In these long tournaments, it gives you an opportunity to take good things from the losses. Now we have a lot to do because there is a lot to extract from this game,” said Sanchez.

SAFC NEEDING LIFT TO PROTECT HOME: San Antonio FC remained outside the Western Conference's playoff places after a 2-0 loss to Reno 1868 FC on Saturday night at Toyota Field that left the side frustrated with its performance, especially given it was a rare home loss, just the second of the season.

After weathering a fierce display by Sacramento Republic FC the previous week to escape with a victory, there's a sense that the side is going to need to raise its game substantially in order to be in the top eight by the end of the season.

“It was a poor performance by us and every guy in that locker room knows that we have to turn that around,” said SAFC defender Darnell King. “We can’t let them come into our house and do that in front of our spectators. This is our home and we have to always show the people that this is our fortress and we have to protect it.”

SAFC tried to make adjustments after going behind to a spectacular free kick by Reno's Jerry van Ewijk late in the first half, but produced only one shot on goal in the second half as 1868 FC ended the game with a 20-8 advantage in total shots.

“When you concede a goal in the first half you have to make some adjustments to try and get yourself back in the game. They scored the second goal which was a disappointment to us,” said SAFC Head Coach Darren Powell.

After failing to find a breakthrough it would be easy to say it’s the attack that SAFC needs to improve, but after the match the frustration was focused on improving defensively after conceding 57 shots over the past two home games. After the club posted a stellar defensive record a season ago to fuel its second-place finish in the conference standings, San Antonio is firmly in the middle of the pack this year in terms of shots on target allowed with 66, which is more than halfway to the 123 shots on goal the side with 20 games to go in the regular season.

“I don’t know if it’s a focus thing or our mentality coming out, but we have to grind harder and make harder tackles and protect our goalie and protect our back line,” said King. “We need to do everything as a team.”