OKLAHOMA CITY – The road is still a steep one for OKC Energy FC if it’s to reach the USL Cup Playoffs for a fourth consecutive season, but after Christian Volesky’s 90th-minute winner in a 1-0 win on Saturday night against the LA Galaxy II at Taft Stadium handed the side its third consecutive victory there now appears to be a light at the end of the tunnel.

Certainly, that appears to be the case for Volesky, whose second goal for the club since his move from Saint Louis FC couldn’t have come at a more opportune time. After coming on as a second-half substitute after missing out on the past two victories as he regained fitness, the experienced forward rose perfectly at the near post to head home Philip Rasmussen’s corner kick from the right to give the hosts a massive boost.

“I feel good,” said Volesky. “I’ve been working hard to get back into the shape I need to in order to play. It feels good to be rewarded for the hard work that me and the trainer put in. Feels like the tide is starting to turn for us just a bit.”

After some of the travails Energy FC has gone through this season, most recently its late reverse against Seattle Sounders FC 2 that arrived directly before the club’s current winning streak, that feeling of turning the tide could help Energy FC as it enters a key run of games against teams it is looking to gain ground on in the race for the playoffs. OKC will face San Antonio on the road on July 4 and then Colorado Springs at home on July 7 in its next two outings, with contests against Las Vegas Lights FC and Fresno FC not too far behind. 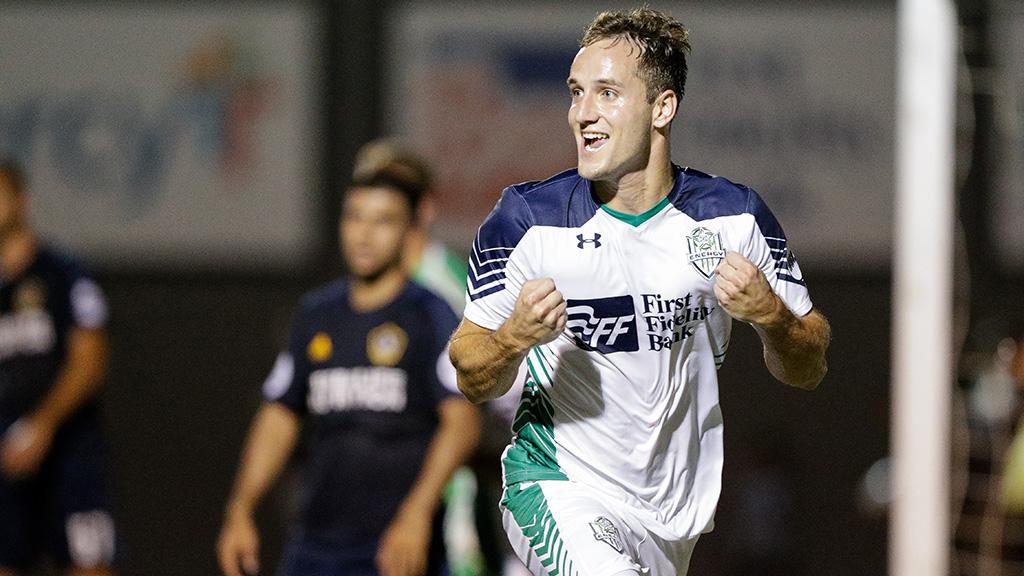 Having some favorable breaks go Energy FC’s way over that stretch would certainly be welcome for the side, but Head Coach Steve Cooke believes the work his side puts in away from gameday is going to be the biggest factor in what sort of shape the side is in when it comes to the playoff race at the end of July.

“I think life is funny, and soccer is no different,” said Cooke. “Sometimes you think the world is against you. It isn’t. You have to keep working and be determined and doing the right things not every once in a while, but every single day when you wake up. You’ve got to go to work and put the performances out there. People think now that the tide has turned and things are really going to go forward for them, we operate the same way. Get up, come to work and do the best that we can each and every day.”

After blistering its way into the playoffs a year ago with a run of five consecutive wins that saw the side score 14 goals to close out the regular season, Energy FC is hoping it can replicate that type of form over the next month of the season. But with a seven-point gap to make up on the eighth-place Switchbacks, the club knows there’s still some heavy sledding to be done.

“This is not us celebrating too hard at this point,” said Cooke. “This is us saying where can we go from here because we’re nowhere near where we need to be. We want to be in the playoff picture, we want to be a team that is trying to win championships . The focus for us has to be how can we get better next week and keep pushing on from there.”