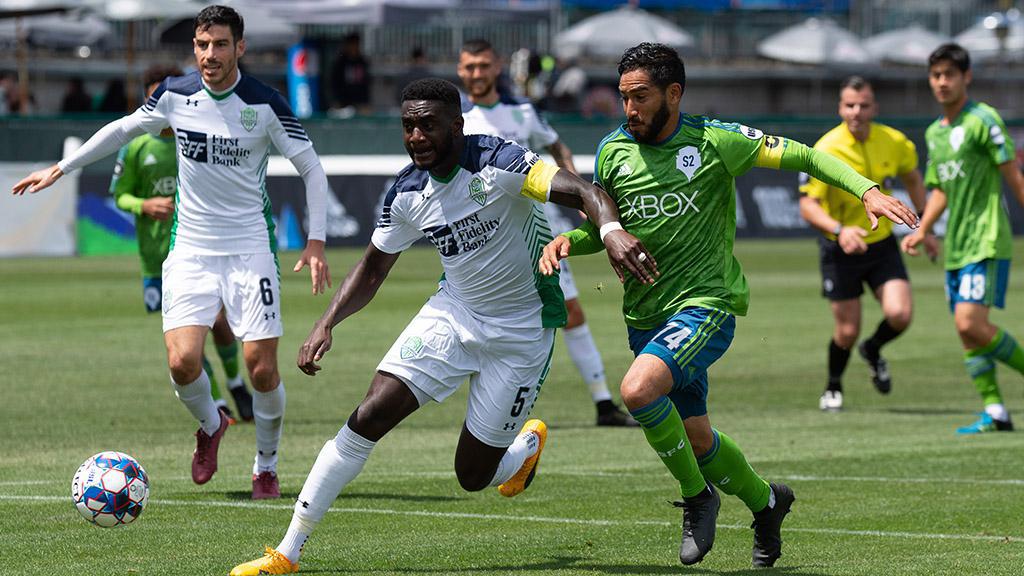 TACOMA, Wash. – David Estrada scored twice in the final seven minutes as Seattle Sounders FC 2 rallied for a 2-1 victory against OKC Energy FC on Sunday afternoon at Cheney Stadium to break a five-game winless streak. The teams exchanged chances early as a header by S2’s Denso Ulysse and a low shot by OKC’s Callum Ross were both comfortably handled, but the first big opportunity arrived for Energy FC in the 32nd minute as a sharp through-ball by Jose Barril set up Christian Volesky, but S2 goalkeeper Calle Brown got off his line quickly to smother. OKC almost carved out other chances as a low cross by Miguel Gonzalez was cleared by S2 defender Sakari Carter from inside his six-yard area late in the first half, while early in the second half a cross by Richard Dixon deflected to Volesky, only for Brown to again make the save. OKC then had a chance from a free kick in the 57th minute that Brown parried away near the left post after Gonzalez curled a shot from 20 yards around the defensive wall, but with 14 minutes to go the visitors finally made one of their chances count as a good angled ball by Ross released Alex Dixon into the left side of the penalty area and his low finish snuck past Brown and into the net. Seattle his back six minutes later, however, as a flicked header by Rudy Stretch released Estrada, who flicked the ball past his marker and then hit a tremendous finish that looped over OKC goalkeeper Matt van Oekel. Two minutes later, S2 took the lead as a low cross from the left caromed through to Estrada at the back post for a roofed finish to leave OKC stunned. S2 needed to defend well to preserve its lead late, and Khai Brisco made a key interception on a low cross by Francis Atuahene in the 89th minute, but the hosts held on to claim a remarkable victory.

David Estrada, Seattle Sounders FC 2 – The veteran led a remarkable comeback from the hosts with both goals in the final 10 minutes as S2 claimed a dramatic victory.