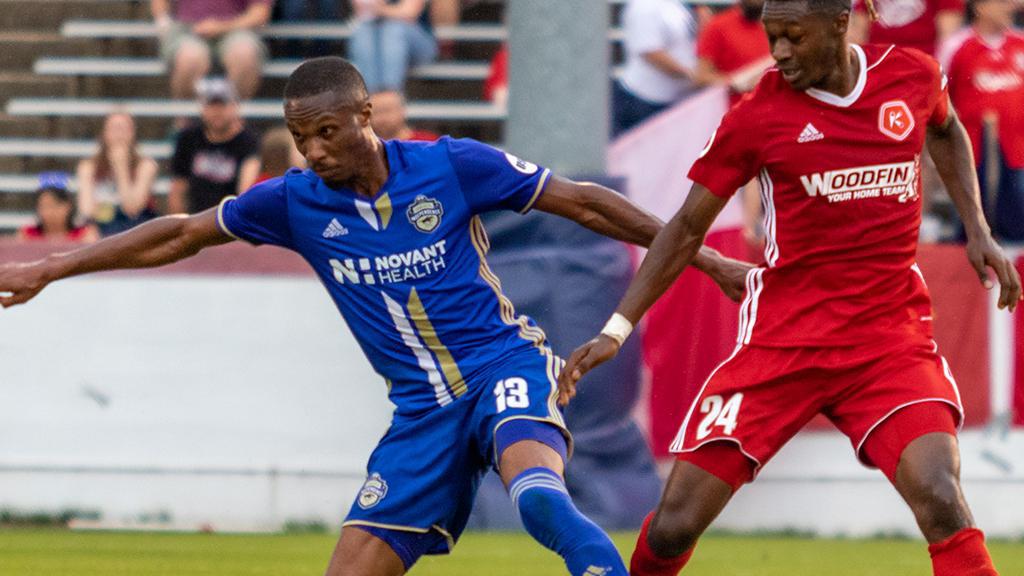 RICHMOND, Va. — Yet to win on the road, but with two wins in a row, the Charlotte Independence had every reason to be confident heading into Saturday’s match with the Richmond Kickers. That confidence came through as the Independence scored three goals to finally get their first away win of the season, beating the Kickers 3-1 at City Stadium in another impressive attacking display.

“I actually thought the goals were beautiful. The first two goals our movements were great, we made the extra pass and ended up with basically tap-ins. Great movement, and really good quick decisions. The third was just a classic counter in a really good spot,” said Independence Head Coach Mike Jeffries. “That’s a big confidence booster for us. We always have good rivalries in the triangle of us, Charleston, and Richmond, and it’s nice coming up here and winning. It feels good to get one on the road.”

With two goals to his name, and providing the assist for the other the star of the show was Trinidad & Tobago international Cordell Cato, who moved level with Jorge Herrera for the team lead in goals. Working alongside Yann Ekra, who scored the opening goal before providing the assists for Cato's two finishes, the 25-year-old was pleased with the first road win of the season. With Saturday's game serving as the first in a four-game road trip for the Independence, Cato believed his side needed the confidence this result would bring.

What made the win was that the Independence went for the match from the opening whistle and never let go, finishing with a 58.4 percent share of possession. That helped set the tone early, which Charlotte would eventually capitalize on.

“We played pretty well for coming out on the road, we didn’t sit back and drop off,” said Cato. “We didn’t allow them to get into the game and in the first half, we got a goal. Then we got a second one and just basically controlled the game from there. We are going to be disappointed about letting the goal go in, but in the end, it’s three points.”

DEADLOCK LEAVES BATTERY, NASHVILLE PLEASED, FRUSTRATED: In a match that left fans of both clubs wanting more the Charleston Battery and Nashville SC played out an entertaining 1-1 draw at MUSC Health Stadium on Saturday night, but it was a result that left both sides disappointed not to have taken more.

Both clubs were reflective after the match, pleased with a point but knowing that things could have been so much better if more went their way. For Nashville, who took a first-half lead through Liam Doyle, there was a frustration about two points dropped, but with points on the road hard to come by in this league, there was a begrudging acceptance of a good result at a venue that has been historically difficult for visitors.

“It’s tinged with a little disappointed that we didn’t take all three points. It was a solid performance. We are in a good run of form right now,” said Nashville Head Coach Gary Smith. “There were one or two moments where we could have had more quality around the box, but the guys have shown a professional attitude on the road. Once we wake up in the morning with another road point we’ll be delighted.”

Having got back into the match early in the second half behind Ataulla Guerra's sixth goal of the regular season, there was hope for the Battery as the Trinidad & Tobago international's tally boosted the strong home support behind them. But the second goal never arrived as an impressive defensive effort from the visitors kept Charleston to that solitary shot on target all match.

“It’s a tough one. You look up and the shots are pretty even. I think we created some quality chances, but in the end, we didn’t hit the target enough,” said Battery Head Coach Mike Anhaeuser, whose side is now undefeated in its last six games at MUSC Health Stadium. “They defend well. They defend with eight and they're a tough team to break down, so you have to give them credit for not conceding a second goal. I think in the second half we played a lot better and we created better chances.”

That defense has been the foundation for Nashville all season and conceding the goal was seen almost as a personal affront to the back line.

“I think as a team, we are disappointed we didn’t get all three points and that shows how far we have come,” said Doyle. “That was a well-taken goal by them, but I don’t think the result reflects the performance we had defensively. We did a good job.”

The equalizer came just five minutes into the second half, and it was surely a result of an impassioned talk from Anhaeuser at the break, urging the team to do exactly what it did to open the half and get the goal back.

“We talked at halftime about being a little more aggressive and moving a center midfielder up into the attack, which would turn them a little more,” said Anhaeuser. “We didn’t really do that in the first half and we didn’t really create too many chances. I think that helped us on the goal because Tah [Anunga] created it by playing Jay [Bolt] through in the attacking third.”

ROWDIES RELIEF AT ROAD WIN: To say May has been a tumultuous month for the Tampa Bay Rowdies would be an understatement, but after a month that included disappointing performances and a coaching change, the side was able to end on a high note with a 4-2 win against Toronto FC II on Saturday.

After recording five consecutive road defeats since its opening day victory against North Carolina FC, the Rowdies were able to break their road scoring drought in emphatic fashion as Junior Flemmings' opening goal of the game in the 24th minute brought to an end 472 road minutes without a goal.

“I didn’t think that [the goals would come quickly] after the first 20 minutes, when we spurned two or three good opportunities,” said Rowdies Head Coach Neill Collins. “You just have to create the opportunities and I know we’ve got a few who can score a goal. I had no doubt, so that was definitely a pleasing night.”

It’s been quite a start to life as a Head Coach for Collins, who is through his first two matches in the position undefeated with a win and a draw. Saturday's game proved somewhat of a rollercoaster ride, with Toronto rallying strongly in the second half to level the score before the Rowdies got goals by Hunter Gorskie off a beautifully-flighted free kick by Marcel Schafer and  Flemmings put the game out of reach.

After the ups and downs the trip to BMO Field provided, Collins is seeing things from a very new perspective on the sidelines and within the organization as a whole thanks to his new position.

“I’m just pleased for everyone around the club, the players on the field obvious, the staff that have helped me, the staff that behind the scenes they’ve helped me,” said Collins. “I think I’ve realized that behind the scenes they feel the defeats just the same as the players, you know they really do. It’s nice that they get to enjoy this one, we’ll enjoy it tonight and then on Monday, it’s time to move on again.”