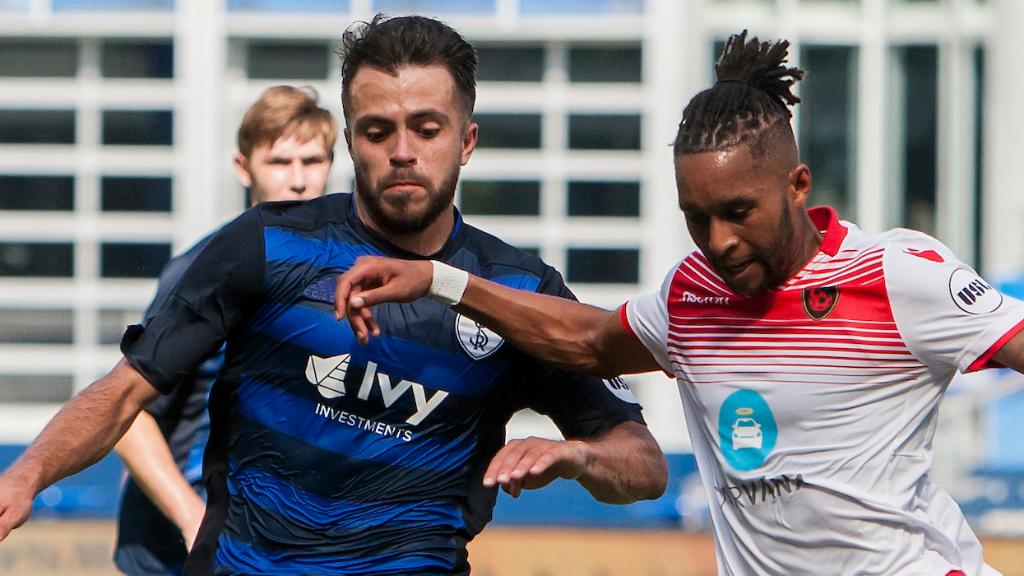 KANSAS CITY, Kan. — A goal four minutes into the match proved enough for the Swope Park Rangers as they managed a 1-0 win against Phoenix Rising FC at Children’s Mercy Park on Saturday afternoon. The goal came thanks to a goalkeeping mistake from Phoenix goalkeeper Zac Lubin, who allowed Swope Park forward Hadji Barry to gather the ball, cut inside and then simply pass the ball into the back of the net. With a strong Rangers defense proving hard to break down, even in the early stages, set pieces presented the best chances for Phoenix to get level but Rising FC's players just couldn’t hit the target with those chances. With time running out in the first half Phoenix forward Chris Cortez sent a ball through for his strike partner Kevaughn Frater, who went clean through on Adrian Zendejas in the Swope goal but could only fire his shot right at the goalkeeper. The Rangers came out from the break determined to double their lead and Barry almost got in behind the defense only for Lubin to come off his line well and snuff out the chance. Zendejas had to be at his best in the 58th minute as a ball to the far post for Phoenix midfielder Jason Johnson forced the Swope Park goalkeeper to make a save at full stretch that he quickly smothered. The offside flag was the biggest barrier for the visitors as the Rangers regularly stepped up well, catching attacking players offside with Cortez the most common offender. Despite holding a one-goal lead late in the match the hosts continued to press looking for another goal that would have sealed the match, but as the clock hit stoppage time the woodwork starred to keep the Rangers out as forward Tyler Blackwood ran through on Lubin who got just enough on the ball to push it onto the post. The rebound fell to Rangers midfielder Rodrigo Saravia, whose effort was well saved before Chase Minter put too much power on his shot effort for the hosts to hit the crossbar, but the late misses proved academic as Swope Park took its first victory since May 5.

Amer Didic, Swope Park Rangers – Didic had a complete match, often being the key man to change defense into attack for the Rangers. Managing to win seven duels, and finish the match with a passing accuracy of 93 percent the defender was seemingly all over the pitch at Children’s Mercy Park.