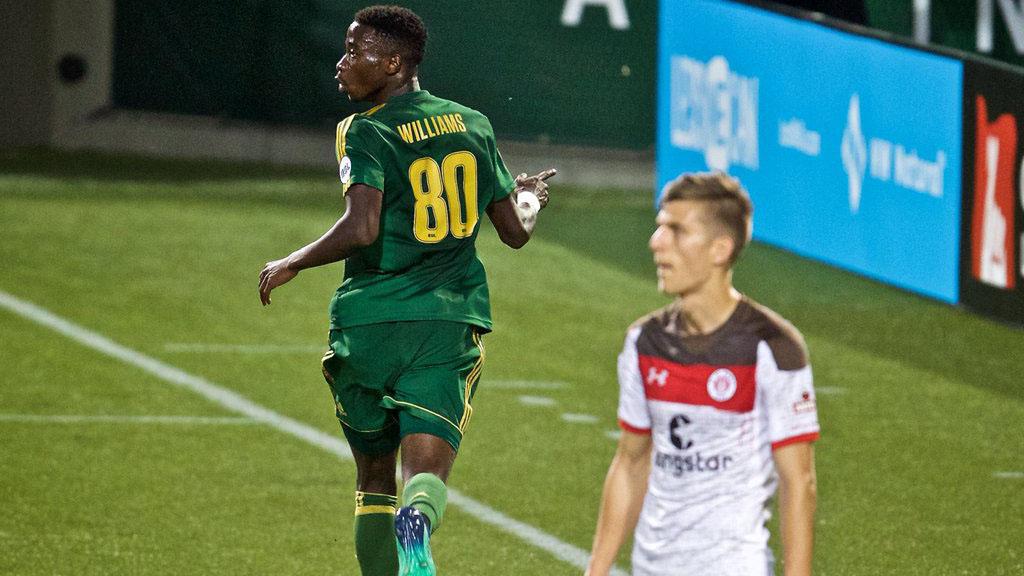 PORTLAND, Ore. – The Portland Timbers 2 got a second-half brace from Augustine Williams, and then claimed a 4-2 victory in a penalty shootout against German club FC St. Pauli after the clubs had played to a 2-2 draw through regulation in an international friendly at Providence Park on Tuesday night.

Portland scored on all four of its penalty kicks, with Andre Lewis giving the hosts the lead in the second round after FC St. Pauli’s Lasse Sobiech had missed with the first shot of the round. Following successful shots by FCSP’s Brian Koglin and T2’s Foster Langsdorf in the third round, Portland goalkeeper Austin Pack saved FC St. Pauli midfielder Waldemer Sobota’s penalty attempt, before T2 midfielder Renzo Zambrano laced his shot into the roof of the net to seal the 4-2 shootout victory.

T2 had to rally back to send the exhibition to a shootout after FC St. Pauli took the lead early on when forward Sami Allagui curled his shot from the left edge of the penalty area into the far corner of the net in the fourth minute.

Holding an 18-8 shot advantage in the match, T2 threatened early when forward Dairon Asprilla’s shot from just outside the penalty area was saved by FCSP goalkeeper Robin Himmelmann in the 12th minute. Three minutes later, Asprilla’s low shot from the edge of the box was collected by Himmelmann.

T2 continued to apply pressure as midfielder Victor Arboleda’s strike from outside the penalty area was caught by Himmelmann in the 19th minute. T2 nearly scored in the 25th minute after Arboleda skipped past two defenders on the left side before finding Asprilla, but the Colombian forward’s powerful header came back off the crossbar. Ten minutes later, Asprilla was on the receiving end of David Guzman’s corner-kick service, but his header flashed over the crossbar. Three minutes later, Arboleda sped by his defender down the right edge of the penalty area, but his spinning, toe-poked shot was saved by Himmelmann.

FCSP doubled its led in the 63rd minute, however, when Dimitrios Diamantakos found the net from Daniel Buballa’s assist, but the hosts rallied behind Williams in the final 20 minutes. T2 cut into St. Pauli’s lead after Marvin Loría’s corner-kick delivery bounced to Langsdorf on the right edge of the box. Langsdorf picked out Williams at the back post, where he headed into the empty net in the 72nd minute.

Portland leveled the match nine minutes later when Williams raced past his marker on the right wing and fired a powerful shot past substitute FCSP goalkeeper Philipp Heerwagen at his near post. Williams’ goal sent the game to a shootout, where T2 prevailed after a compelling contest for the 5,774 on hand at Providence Park.