TAMPA, Fla. – FC Cincinnati midfielder Emmanuel Ledesma has been voted the USL Player of the Week for Week 10 of the 2018 season. The Argentine recorded the first three-assist game in the USL this season, and found the net himself, as Cincinnati took a 4-1 victory against North Carolina FC this past Saturday before a crowd of 22,884 at Nippert Stadium. 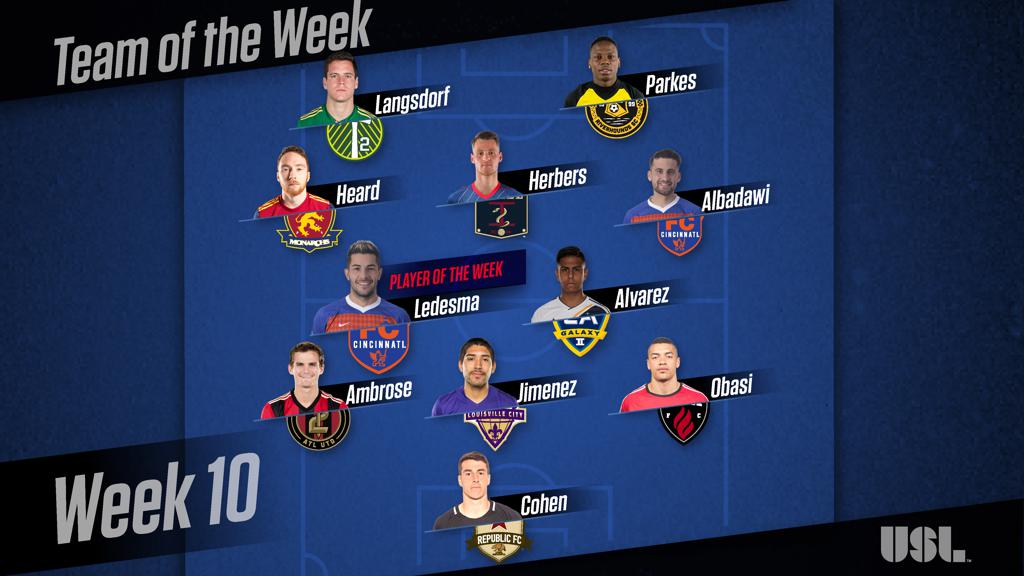 M – Josh Heard, Real Monarchs SLC: Heard recorded his first goal for the Monarchs and also had an assist as the visitors took a 2-0 victory against Las Vegas Lights FC at Cashman Field.

M – Emmanuel Ledesma, FC Cincinnati: Ledesma had a hand in all four goals for FCC, recording one goal and three assists – a 2018 single-game high – to lead the hosts to a 4-1 victory against North Carolina FC.

M – Fabian Herbers, Bethlehem Steel FC: Herbers had a goal and assist as Bethlehem took back-to-back victories over the week against the New York Red Bulls II and Indy Eleven.

M – Efrain Alvarez, LA Galaxy II – Alvarez scored another pair of goals, both from outside the penalty area, in a losing effort for Los Dos as they fell on the road to the Portland Timbers 2.

F – Foster Langsdorf, Portland Timbers 2: Langsdorf recorded the first hat trick in T2’s history to lead the side to victory against the LA Galaxy II on Friday afternoon, its third win in the past four games.

F – Romeo Parkes, Pittsburgh Riverhounds SC: Parkes played a role in both the Hounds’ goals, including scoring the second, as Pittsburgh remained undefeated in earning a 2-2 draw on the road against the Tampa Bay Rowdies.