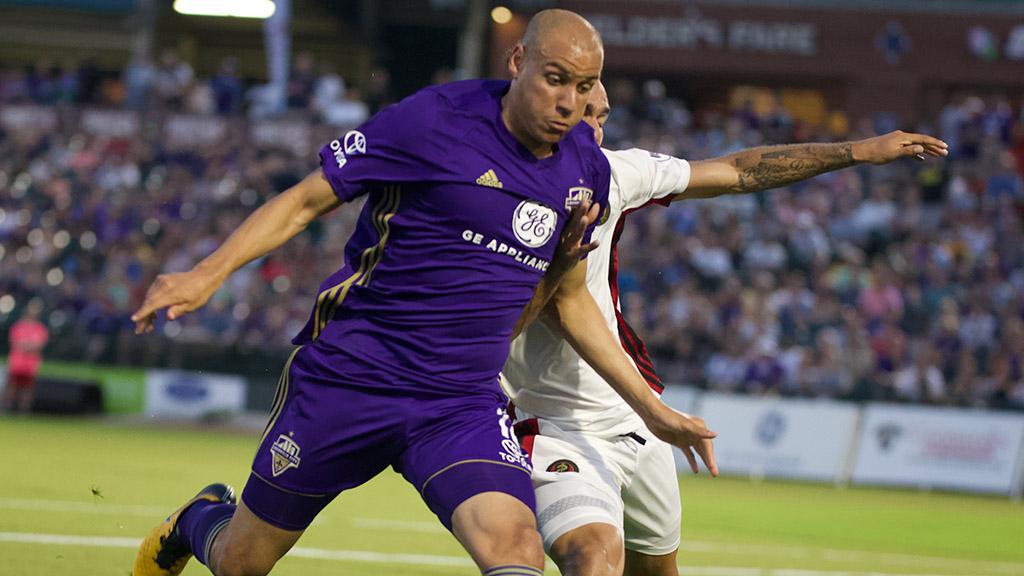 LOUISVILLE, Ky. – With the arrival of the Lamar Hunt U.S. Open Cup to a usually-busy league schedule, May is a busy period for most USL teams which means a lot of work from players and Head Coaches to manage the workload to allow success in both competitions. In capping off a run of three games in six days by breaking a two-game league losing streak, Louisville City FC excelled on Saturday night to manage a dramatic 2-1 win against ATL UTD 2 before a crowd of 8,363 at Slugger Field that left Head Coach James O'Connor proud of his side's ability to end strongly.

“Lots of really heavy legs. I think that’s why it was so important. I think for us it’s difficult. We’ve gone from rain and a little bit of cold to now all of a sudden, we’ve got hot and humid in the blink of an eye,” said O’Connor. “And the hot and humidity has come when we’ve got three games in whatever it is, six days and then we’ve got another one Wednesday. We try to manage that and that’s why the players deserve enormous credit. There are a few that have played all three games and have to really dig deep and really push through in tough conditions.”

After conceding just seven minutes after taking the lead through Cameron Lancaster's fifth goal of the regular season and being held out for almost the entire second half it was looking like being a frustrating night for the defending USL Cup champions, who managed 26 shots against Atlanta. But in stoppage time a penalty gave the hosts a lifeline that Ilija Ilic converted – a reverse of when the teams first met this season that saw Atlanta grab a 1-1 draw late from the spot – to keep Louisville in touch with River Cities Cup rival FC Cincinnati at the top of the Eastern Conference.

O'Connor's substitutions provided some of the momentum that Louisville carried through the second half as Ilic, Magnus Rasmussen and Luke Spencer produced consistent pressure after being brought on to add to Louisville's attacking options. The trio pushed the issue, with Spencer's physical presence in particular having a major impact, which allowed the hosts to finally break through.

“I think for us we’re desperate to win every game. So, I think we felt as if we had good control. Just thought we needed a little bit more quality as we started to tire,” said O’Connor. “I think it became evident with some of our passing at times it looked like some of our lads had gotten really heavy legs. And that’s why I think the boys deserve enormous credit to keep going and pin them in the way we did in the second half. Really keep fighting and keep pushing and not just accept the draw.”

ALBADAWI PRODUCES FOR FCC: Going up against a former team means many things to many players depending on circumstance, but as was the case in FC Cincinnati midfielder Nazmi Albadawi's display on Saturday night against North Carolina FC it can often lead to a tough time for the club the player departed.

With a first-half brace that played a key role in the 4-1 victory before a crowd of 22,884 fans at Nippert Stadium, Albadawi's performance helped set the terms of the match against a side for which he had previously excelled.

“[North Carolina FC] means the world to me, to be honest. I wish them nothing but the best, unless we’re playing against them,” said Albadawi. “If we’re playing against them, or if it affects us, then obviously I want us to pull it out. I want my club – FC Cincinnati – to win. But they’re still close to my heart and moving forward I wish them good luck, but I’m glad I was able to help us beat them today.”

Like many players for FCC, Albadawi has been returning from injury early in the season which has led to a number of changes in the squad from week-to-week, but with players returning and stability starting to come the players are starting to click with each other.

“We’ve had guys out; I’ve been out with an injury for a while, so it was nice for me to get back in and play with those guys again,” said Albadawi. “We’re starting to learn how each other play and as we continue to do that, we’re only going to get better and better. Today was a step in the right direction, so hopefully we can keep that going.”

Among those that has been among the consistent presences for Cincinnati this season was also at the center of a big bounce-back victory, though, as Emmanuel Ledesma produced the first three-assist performance of the regular season while also notching a goal from the penalty spot himself. Now sitting clearly in the lead for assists in the league with seven, Ledesma is at the forefront of a side that FCC Head Coach Alan Koch believes is still improving.

CLOSING TIME FOR INDEPENDENCE: After managing a second consecutive win on Saturday night, a 2-1 victory against Toronto FC II at the Sportsplex at Matthews, the Charlotte Independence were still not satisfied with just getting a result. Seemingly in control of the match with a two-goal lead in the second half, the Independence made it tough for themselves conceding a goal in the 66th minute to make for a tense finish that Head Coach Mike Jeffries believed the side should have negotiated more comfortably.

“I thought that we managed very poorly, they subbed and stepped up and pressed us,” said Jeffries. “We lost composure, we didn't really keep our shape, we got really stretched really quickly and we struggled. I thought we had a stretch of 12-15 minutes where we weren't great and we couldn't pull off plays. We had opportunities in that stretch to get the next goal and we didn't.

“The cliché of keeping a team around gave us trouble. I do not think we closed the game out very well and I think that's the disappointment. We have not had many games where we have had a one-goal game and had to close it out and we did not look sharp in those areas so that is something that we will come back to and work on."

The win still produced a significant number of positives for the Independence, which moved back into the Eastern Conference's playoff positions as youngster Mutaya Mwape put in the most impressive performance so far of his first professional season.

“I thought Mutaya [Mwape] had a sharper night,” said Jeffries. “The cross 45 seconds in that he puts on Jorge [Herrera]'s head, the assist, he was a little more clinical in the final third, I thought it was a better night. He found the game a little bit better, it was good to see from him for sure.”

Despite not being fully satisfied with the win, winning does breed confidence, and with just two teams currently having won two consecutive games in the USL Eastern Conference (Bethlehem Steel FC being the other) the hope for Charlotte is that Saturday's win will push the side forward ahead of a road game against the Richmond Kickers next Saturday.