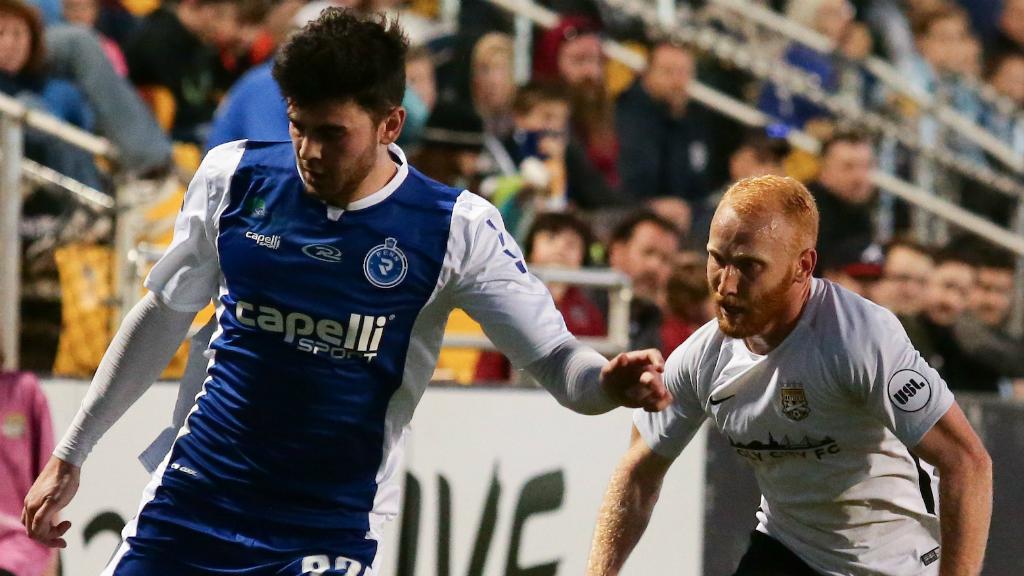 HARRISBURG, Penn. – After playing early in the season, Penn FC and Charleston Battery meet again this Saturday night at FNB Field, which also served as Penn's first home opener since the club's new look and identity was unveiled this offseason.

With the Battery set to take on the team they’ve managed their only win against, a 1-0 win on March 24th, there is a level of confidence that they can get their second win of the season. With the visitors coming off a bye week, Battery Head Coach Mike Anhaeuser feels that game helped prepare for this match.

“It does give you confidence but they’re playing at home,” said Anhaeuser. “They came in here and defended well. They kept five in the back and defended very organized and structured. They were very physical here and made the game difficult. We were fortunate to get the goal from Ataulla [Guerra]. We know it's probably going to be the same type of game but I think they’ll open up more. They’re playing at home and any time you’re playing at home you’ve got to be prepared for teams to open up and push forward a little more but we’re ready for it.”

For Penn FC, the early-season loss coupled with the fact that the club is still looking for its first win of the regular season is spurring the side. Looking back on the first meeting, Penn's players were disappointed not to get the regular they believe they should have in the first encounter of the season.

“The group feels we deserved more when we went down there. But that's not the name of the game. We didn't take the points down there,” said Penn forward Tommy Heinemann, who played previously for the Battery early in his career. “Charleston is an extremely solid group. Anheuser puts a solid group and very competitive group on the field. For us to have an opportunity to play them in quick succession here, hopefully, we can take care of business.”

That home advantage sentiment was echoed by Penn defender Ken Tribbett, who is excited to welcome the club's fans to the first home game of the season.

“Of course, having the home field in any professional sport is a big advantage. We're looking forward to having our own fans coming out and not traveling,” said Tribbett. “Being able to sleep in our own beds and prepare for a game...it'll be nice.”

The Battery, meanwhile, are midway through a four-game road trip that will conclude next Tuesday with a visit to ATL UTD 2. While the side has made an up-and-down start to this season, picking up points in the next two games as well as sharpening the club's performance has been the main focus for Anhaeuser during the club's time on the training ground.

“You want to go out and have a good performance, we had a better performance against Bethlehem on the road, but we have two more road games and we want to go out and get points and that’s the key,” said Anhaeuser. “Not worrying about three points, we want to make sure we’re not giving up three points to the home team. We had a great week of training so far. If we can get two decent results on the road we're going to have a homestand that will put us in a good position.”

Penn also had a bye last week and with a squad that has been plenty of work in their legs, the focus was on getting fit and taking it easy.

"There's been a lot of recovery," said Tribbett. "So at the beginning of the week, we had some guys that have played the bulk of the minutes kind of take it easy and let the legs recover. Also, now that we're getting towards the end of the week, and, with the weekend off, we're kind of ramping it back up because typically we have a game and our bodies are used to putting in the work.”

LILLEY’S RECORD “COUNTS FOR NOTHING”: FC Cincinnati has long been a tough team for opponents to play against at Nippert Stadium with a big crowd making plenty of noise and creating an intimidating atmosphere for opponents. That is the scenario that faces Pittsburgh Riverhounds SC on Saturday when the Hounds travel with the goal of defending their undefeated record.

Having been part of another big occasion already this season as the visitor for Nashville SC's professional debut at Nissan Stadium last month, though, the club is feeling prepared for what lies in story.

“You try to prepare your team for big moments and embrace those challenges. We've already been in front of one large crowd this year in Nashville. After a shaky start, I thought we performed quite well. It'll take that this week against Cincinnati," said Riverhounds SC Head Coach Bob Lilley.

As a Head Coach, Lilley has put together a positive record against many teams in his prior stops, and Cincinnati is no different. Lilley's Rochester Rhinos sides went 3-0-1 against FCC over the past two seasons, including a hard-fought 3-2 victory on the road a season ago. While that's a point of pride, Lilley doesn't believe the past will factor into Saturday's outcome.

“Cincinnati has been a very good team the past two years. This year is different. I’m happy to have a good record against them, but it counts for nothing heading into Saturday,” said Lilley.

With a strong start to the season, Pittsburgh has built confidence in the playing style as the team has settled into the 2018 season. While Cincinnati will likely offer its biggest test of the season so far, the Hounds aren't going to make many changes to a side that has yet to concede a goal in four games this season.

“I don’t know to say that we’ll do anything differently,” said Goalkeeper Coach Hunter Gilstrap. “I think these guys are getting into a rhythm. We try to keep them on that rhythm and keep them in a headspace that keeps them prepared and ready to perform.”

OTTAWA A WORK IN PROGRESS: It’s obvious that Ottawa Fury FC is not satisfied with its start to 2018 with the side yet to pick up a point this season, but Fury FC kicks off its home schedule this Saturday afternoon against North Carolina FC at TD Place hopeful that home advantage will change its fortunes.

Part of that rough start has been thanks to numerous changes in the squad with 16 new players, and the arrival of Popovic as the club's new Head Coach in Popovic. While the side took a more pragmatic approach than the passing style Popovic has looked to implement against Pittsburgh Riverhounds SC last weekend, Popovic feels things are getting close to clicking into place for the squad.

“We are still trying to understand and get to know the players,” said Popovic. “We spent a lot of time playing in a smaller space indoor, and now coming outdoors we have different performances so we are still trying to test some players to see how they behave on the big surface.”

There is still plenty of work to be done, but with Ottawa starting to emerge from the Canadian winter and get more training outside, there is a belief that Saturday could be the opportunity to show the work the club is putting in is going to pay big dividends further down the road.

“We still have work to do. We can see flashes of what we want this team to look like, but as I mentioned before, this is work in progress. We need to do the good things better and with more consistency,” said Popovic.