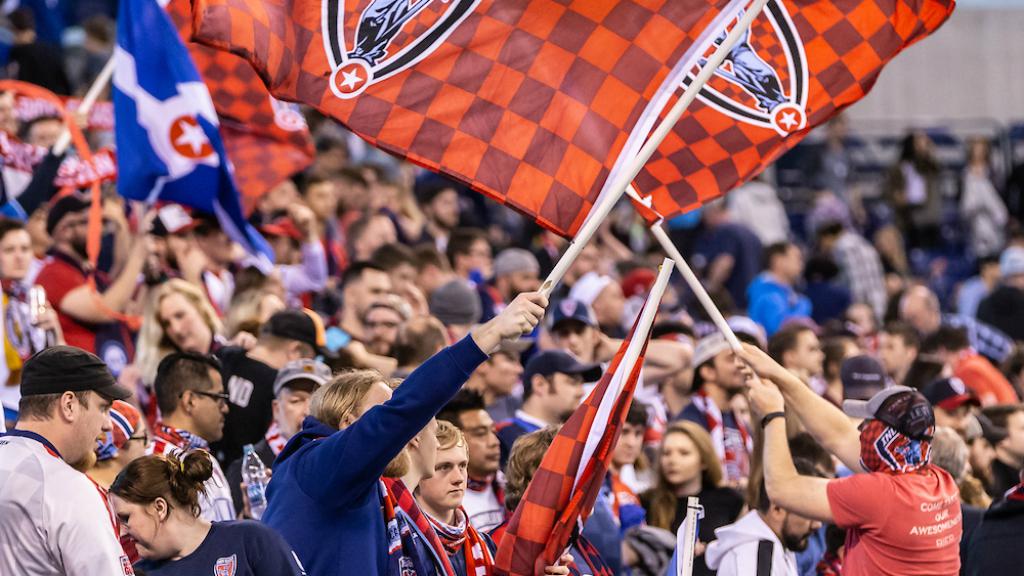 INDIANAPOLIS – Seemingly cruising with a two-goal lead with halftime approaching things were looking good for Indy Eleven as it was on course for its first home win at Lucas Oil Stadium. But then just before halftime things changed as Ropapa Mensah pulled a goal back for Nashville SC, making Indy Head Coach Martin Rennie completely change his notes for halftime.

That talk obviously worked as Indy lifted defensively in the second half, keeping Nashville off the scoreboard while finishing with an 83.3 percent tackle-success rate. The Eleven's second-half defensive performance proved crucial as Indy secured its first home win of 2018 before another raucous crowd of 10,188 fans.

“What we said was we played 43 minutes perfect football, soccer, whatever. We played 43 minutes of a perfect game and had a small lapse in concentration and we couldn’t afford to have any lapses of concentration in the second half,” said Soony Saad, who notched both first-half goals for the hosts. “If we can push for a cushion then that’s the plan but we ended up keeping the lead and defended for the last 45 minutes.”

With its first consecutive USL wins, and first win at home, the pressure is starting to fade for Indy, which now sits fourth in the USL Eastern Conference, just three points behind leaders Louisville City FC.

“It’s always until you get that first win your always feeling the pressure and I think that will build our confidence a lot,” said Rennie.

INDEPENDENCE HAUNTED BY ERRORS: After a promising three-game undefeated streak to start to the 2018 USL season, things have started to fall away for the Charlotte Independence, with their defeat to in-state rivals North Carolina FC on Saturday at the Sportsplex at Matthews proving the latest disappointment as an early-second half goal by Daniel Rios paved the way to victory for the visitors.

“It's definitely frustrating. I think for the last 30 minutes first half we controlled the ball, had the run of play and had opportunities in the final third,” said Independence defender Donnie Smith. “Going into halftime we all felt really confident about where we were as a team. It was just unfortunate about what happened at the beginning of the second half. Dynamic changes a little bit and the rhythm is just a little bit off. We never got back to that same spot that we were in in the first half. You see the potential that we have when we are moving the ball. Just keeping that consistency in the second half is the next step.”

In each game of the now-three game winless streak the Independence have given up the opening goal of the match. That has left Independence Head Coach Mike Jeffries unhappy at the defensive lapses that have occurred over that span, with both Rios' opener and Marios Lomis' insurance goal late for NCFC coming off misplays by the hosts.

“It's three games in a row where we've given up the first goal and really not even made the opponent earn it in terms of really putting together a great play and breaking us down so it's disappointing,” said Jeffries. “It will definitely be a point of emphasis heading into the break.”

With a week off ahead of their next fixture on April 28th against Indy Eleven, there will be plenty for Jeffries to work on with his team. But the sign of a good Head Coach is quickly formulating a plan to fix those mistakes and right after the match, Jeffries was making his plans.

“We had plays where could run at their back group and were effective in the first half. I felt like Jorge [Herrera] worked really hard and put himself in good spots,” said Jeffries. “We do need that next guy to come into it and get a creative play from central midfield, from outside midfield, and with Caleb [Calvert] and Herrera. I didn't feel like we were quite dynamic tonight as well, movement wise or in what we tried."

LOUISVILLE OFF TO RECORD START: Defending USL Cup champion Louisville City FC has picked up where it left off in 2017, with four straight wins forming the best start in club history. The side has achieved that perfect start despite numerous obstacles to reaching the high level it has reached so far, in particular with local weather severely impacting training.

“We’ve had the training grounds being flooded, so to actually wanting to go out and play I can’t speak highly enough about the players,” said Louisville Head Coach James O’Connor. “And really I think they deserve enormous credit for the way they’ve conducted themselves and how they perform.”

The club's 1-0 halftime deficit against the Richmond Kickers at Slugger Field on Saturday was the first goal Louisville had conceded this season, and as a result the first time the team had needed a second-half response. It got just that after a halftime talk from O’Connor that produced a heightened attacking performance by his side. Louisville recorded 19 of its 28 total shots in the second half, with the stoppage-time winner by George Davis IV proving the crucial moment in earning the club's fourth consecutive win.

“[The message was] staying patient. And I think composure. But also just trying to capitalize on areas that I think we could do better in,” said O’Connor. “I think we were back in it in the second half. Again, immensely proud of their efforts and their desire to keep going and keep going and keep going and not just accept when the first goal goes in, but there’s even more drive to try and go on and win the game. Great credit to the guys to come on and win the game. It’s great to see guys come out and do that. And it shows how together this group is.”