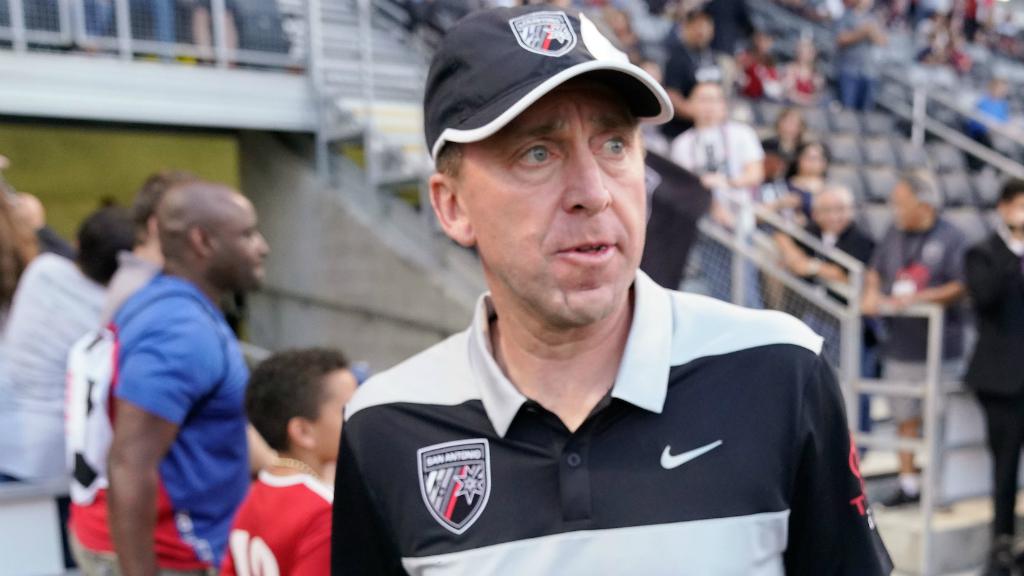 SAN ANTONIO – San Antonio FC Head Coach Darren Powell has a unique ritual on match days, a long run to help him clear his mind and get in the zone for the day’s game. But after his father, Trevor, was diagnosed with Parkinson’s disease, Powell looked for a way to support his father and others suffering from the disorder of the central nervous system.

The answer was clear. A classic way to raise support and awareness, a run.

“I want to try and help my father because he’s always been an inspiration to me in my life and career path,” Powell said. “With the distance being so far away and me being unable to visit regularly, I wanted to make sure that we could raise awareness. Prior to my father’s diagnosis, I didn’t know much about the disease, but I’ve seen the effects from a personal perspective and wanted to make sure that we could send a message to my family, and others who are going through similar things, that we’re fighting the battle with them.”

Powell will be using his pre-match runs to raise that awareness, with the SAFC Head Coach running five 5k races through the rest of the USL season, beginning this month as part of Parkinson’s awareness month.

“I typically run on game days,” Powell said. “So, we’re looking at doing at different runs on game days that can not only raise awareness for Parkinson’s but maybe some other causes that those runs are in aid of.”

All races will take place before a San Antonio FC home game with the first race taking place this Saturday at 9 a.m. in the Dash to the VTO. Fans can register here to run with Darren. Both SAFC and Powell are encouraging donations towards Parkinson’s Research through the Michael J. Fox Foundation.

“My father fights every day,” Powell said. “You probably wouldn’t know he has Parkinson’s, but he fights every day, and does his exercises. He’s been able to inspire me my whole life, so hopefully, we can continue to help him fight this battle.”

ORANGE COUNTY HITS THE MARK: One of the notable stories to start the 2018 USL season has been the success of Orange County SC, which has taken three consecutive victories to sit in second place in the USL Western Conference going into this weekend's visit to San Antonio FC.

With 10 goals already in five matches, OCSC has seen its side come together impressively in the attacking third as its newcomers led by leading scorer Thomas Enevoldsen have hit the ground running.

“First and foremost you have to have quality players who can finish. We have done a great job in selecting the right players,” said Orange County Head Coach Braeden Cloutier. “But from there we created a system and environment that those players have bought into. We created a lot of chances the first two games but we were a bit unlucky. We knew if we stuck with it, once the first goal went in, they would come in bunches, which fortunately they have the past several games.”

It would be easy for Orange County to sit back on its laurels after such an impressive start to the season, but the mood in the camp is strong and there is a desire to keep its form going as it visits one of the better defensive clubs in the league this week.

“We just keep approaching each game the same way, with a never-satisfied attitude and also hungry to get better,” said Cloutier. “These players have set a high standard for themselves and with the competition within the team itself, they continue to push each other harder and harder each week in training.”

One of the stars in last week’s victory against local rivals the LA Galaxy II success was midfielder Mark Segbers. The New England Revolution loanee was an early substitute coming off the bench in just the 23rd minute after an injury to Richard Chaplow, and went on to notch a pair of goals in the 3-0 win to earn USL Team of the Week honors on Tuesday.

But for Segbers, his success has been a result of his teammates.

“To be honest it’s been the group of guys around me,” he said. “They’ve made the transition into the team very smooth which has helped with my confidence, which ultimately leads to good performances. So it’s been a good combination of help from my teammates on and off the field.”

UNDEFEATED SIDES FACE OFF IN VEGAS: With two teams full of confidence facing off in front of a crowd that has been producing a raucous atmosphere, Saturday’s match between Las Vegas Lights FC and Sacramento Republic FC is set to be a thriller as two undefeated records go on the line.

Both teams are coming into this match with a very different entry points to the match, with Sacramento looking to build on a hard-fought 1-0 victory against Seattle Sounders FC 2 last Saturday at Papa Murphy's Park. For the visitors to Cashman Field this week the focus has been on performance, not results, with the key concept emphasized being the results flow from the performances.

“We try to approach the game based on how we're doing in training and how we're playing. I think results and points flow from that,” said Sacramento Republic FC Head Coach Simon Elliott. “I don't think that the last performance was particularly good. We got some points. I think Seattle played well, to be honest. They have some good young players and they were smart and aggressive. We need to be better, quite frankly."

On the opposite side, Vegas comes in off a bye week and is has been trying to rebuild its sharpness after a 2-1 victory against the Swope Park Rangers on March 31. The team had three days off the training pitch to rest and grow as a team, which has allowed a lot of time to really focus on Sacramento and make plans for Saturday.

“We trained on Sunday after our last game. That was a very mature act from our players. That's our base – our work ethic. If there is a time in the future where we are not performing well, we will keep working," said Lights FC Head Coach Isidro Sanchez. “It's important to have time off so you can digest all the information. This is a long week. It's a week of 10 days. We're focusing on Sacramento the whole time. It's important for the coaching staff to have the correct balance between digesting information and pressing a little bit.

The excitement that fans of both teams are feeling is making its way down to the players, who are already fired up and motivated for a big win on Saturday.

“We're excited. We've got a bit of momentum behind us. We're unbeaten and we just can’t wait to go there and get a result,” said Republic FC forward Wilson Kneeshaw. “It’s our first time playing there, We'll go there for a fight and hopefully get three points.”