Mensah scores first goal for NSC before 9,059 fans against Atlanta 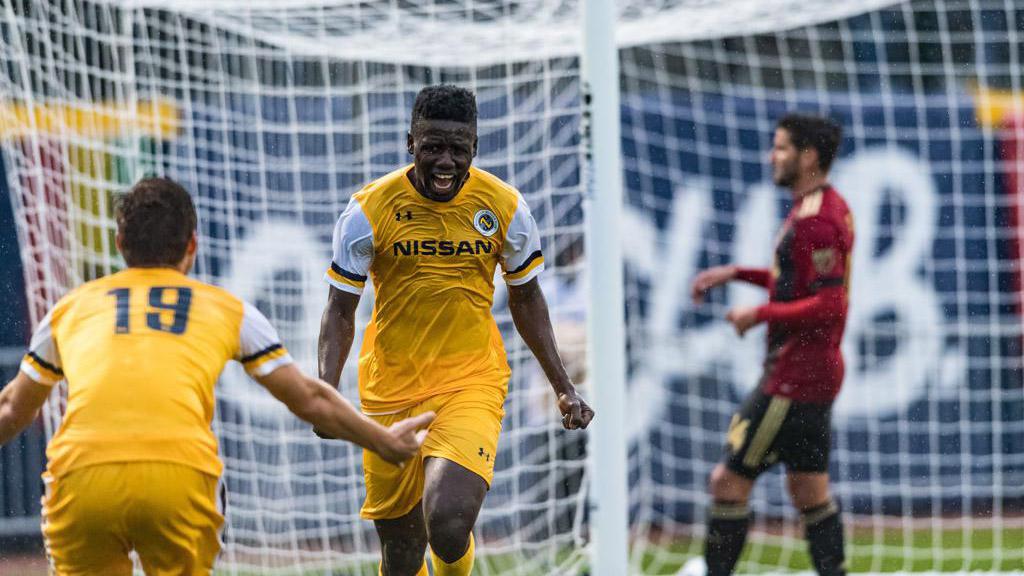 NASHVILLE, Tenn. – The playing conditions weren’t the most welcoming, but Nashville SC made a rousing start to its professional history as a sellout crowd of 9,059 fans filled First Tennessee Park for the club’s first preseason outing against Atlanta United of Major League Soccer. A trio of second-half goals saw the visitors claim victory, but Ropapa Mensah’s tally left Nashville with its head held high after the 3-1 defeat.

“It was very wet,” said Nashville SC Head Coach Gary Smith. “If have to be perfectly honest, I thought they conducted themselves very well certainly in the first period. That's going to be our most experienced outlet; that won't necessarily be the final 11. Looking back at the last two weeks, extremely pleased defensively we looked difficult to breakdown. There was some very nice interchanges of play.”

Atlanta had the better chances in the first half, with newcomer Ezequiel Barco going close with a shot that flashed just wise of the post. United States international Darlington Nagbe also hit the left post with a fierce effort from 20 yards and volleyed just over the crossbar from a corner kick, but the game remained scoreless at halftime.

The visitors finally took the lead just before the hour-mark as Josef Martinez capitalized on the heavy conditions, seizing on a pass that held up in the turf before curling a first-time shot into the right corner of the net.

Nashville hit back quickly, however, as Mensah scored the first goal for the club in the 64th minute. A cross by recent signing Alan Winn – a former PDL standout for Tobacco Road FC – provided the opening for the Ghanaian forward to send the home crowd into celebration.

“I love it when you call me Ropapa”@RopapaMensah scored the first goal in Nashville SC history with this chip over the goalkeeper. #OurTownOurClub pic.twitter.com/UZ93Dos1bA

“I am happy because out of the whole Nashville SC team, I am the one who scored,” said Mensah. “We are so proud to have so many supporters behind the team. I saw the ‘keeper’s movement, that he was going down low, so I knew I had to chip it over him.”

Atlanta regained the lead for good 10 minutes later as Brandon Vazquez chipped home a finish from a through-ball by Nagbe, and then completed the scoring as 2017 USL All-League selection Romario Williams, who spent last season on loan with the Charleston Battery scored from close range in the 78th minute. Despite the final score, the club left a positive impression on its visitors.

“I think they’ve only been together for 12 days, and it’s a fair play to them,” said Atlanta goalkeeper Brad Guzan. “They were very organized. They had quality players, and I think when MLS does come eventually, it is going to be a hit here. I think this team in USL will be a very good team. I know Gary Smith is an organized manager, and he’ll be able to get the most out of his players.”