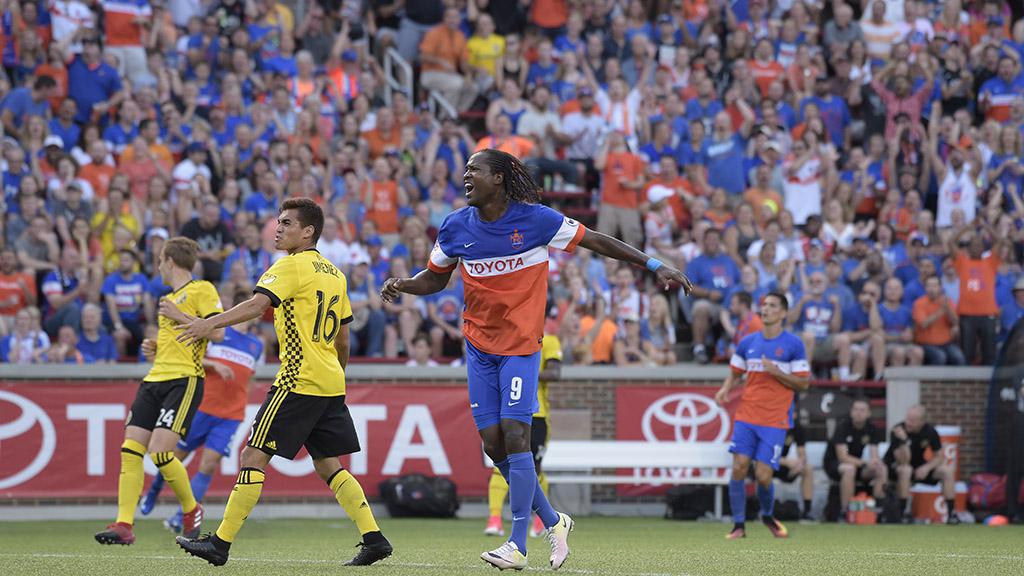 There have been historic runs by USL clubs in the history of the Lamar Hunt U.S. Open Cup, but it hadn’t been since 2011 that one of the league’s clubs had advanced as far as the tournament’s semifinals until FC Cincinnati caught the imagination of the country on a run that further lifted the club in the national consciousness over the past summer.

In fact, behind the goal-scoring feats of Djiby Fall and the goalkeeping of Mitch Hildebrandt, say nothing of the contributions that came in all areas of the field over a remarkable five-game run, Cincinnati brought a major spotlight to the historic tournament that saw national television all the way to its conclusion.

And yet, the tournament started slowly for the club. A 1-0 extra time victory thanks to Fall’s 117th minute goal got FCC on its way against amateur side AFC Cleveland in its first, but not last, game against in-state opposition.

A more familiar foe awaited in the Third Round with Louisville City FC the visitor to Nippert Stadium, and once again Fall proved the difference-maker for the hosts. The Senegalese striker’s 49th minute finish, knocking home the rebound after Harrison Delbridge’s header had been denied, gave FCC victory over its River Cities Cup rival, and set up the must-see game of the Fourth Round.

Columbus Crew SC came to Nippert Stadium on June 14, and were welcomed by a crowd of 30,160 for the first competitive meeting between the two Ohio clubs. With the game scoreless at the halftime break, Fall’s second-effort header in the 64th minute that looped past Crew SC goalkeeper Zack Steffen into the right corner brought the stadium to its feet. Hildebrandt then kept the fans there, as his five-save shutout earned a historic win in front of a historic crowd.

FCC’s victory against Columbus was one thing, but two weeks later the national spotlight arrived as the visit of the Chicago Fire brought ESPN’s cameras to arguably the most dramatic game of the tournament. With 32,287 fans, Cincinnati went toe-to-toe with a Fire side that would finish third in the MLS Eastern Conference at the end of the season, and while Hildebrandt ended the night with 10 saves in regulation and overtime, Cincinnati could have taken victory itself if not for a seven-save display by the Fire’s Matt Lampson.

With the game scoreless after 120 minutes, however, the game was settled from the penalty spots, and Hildebrandt bested his opposite number. After Aodhan Quinn missed for FCC to open the shootout, Hildebrandt made back-to-back saves to deny MLS Golden Boot-winner Nemanja Nikolic and Arturo Alvarez, giving Cincinnati a 1-0 lead behind Josu’s goal to open the second round. Delbridge and Jimmy McLaughlin then kept their cool from the spot to make it 3-1 in the fourth round before Hildebrandt’s third save of the shootout, this time on Juninho, kicked off a celebration that went well into the night.

There was drama of a different kind awaiting FCC in the Quarterfinals as it visited Miami FC, when torrential rain and lightning on the night of July 12 saw the game abandoned before a ball was kicked. Knowing victory would result in a home tie against the New York Red Bulls when the teams reconvened on August 2, Cincinnati’s stellar defensive play continued as it recorded a fifth consecutive shutout in the tournament to allow Fall’s fourth goal of the tournament, a near-post finish in the 68th minute, to carry the day.

Having equaled the Richmond Kickers’ 2011 feat in reaching the Semifinals, FCC had its sights set on becoming the first lower-division club since the USL’s Charleston Battery in 2008 to reach the Final. The second-highest attendance in Open Cup history was there to cheer them on, with a sellout crowd of 33,250 on hand, and despite Fall’s absence due to suspension, when Corben Bone gave the hosts the lead with a spectacular finish in the 31st minute the belief ran through the stands.

Those thoughts were only amplified in the 62nd minute as Cincinnati native Austin Berry gave FCC a two-goal lead with a powerful header from Kenney Walker’s corner, but then, in an instant, the magic ran out. Two goals in four minutes by Gonzalo Veron and Bradley Wright-Phillips pulled New York level in dramatic fashion, and while FCC held on to force extra time, Wright-Phillips’ second goal of the night in the 101st minute proved the winner in a 3-2 thriller.

While the defeat stung for the hosts – who had been 15 minutes from another famous victory – the impression FCC left on those they faced, and the fans they won nationwide, was unforgettable.

“A second-division team in the semifinal of the Open Cup – that’s awesome,” said Red Bulls captain Sacha Kljestan. “This is so huge for soccer in our country, big for the club and big for the fans too. This is what the Open Cup is all about.”