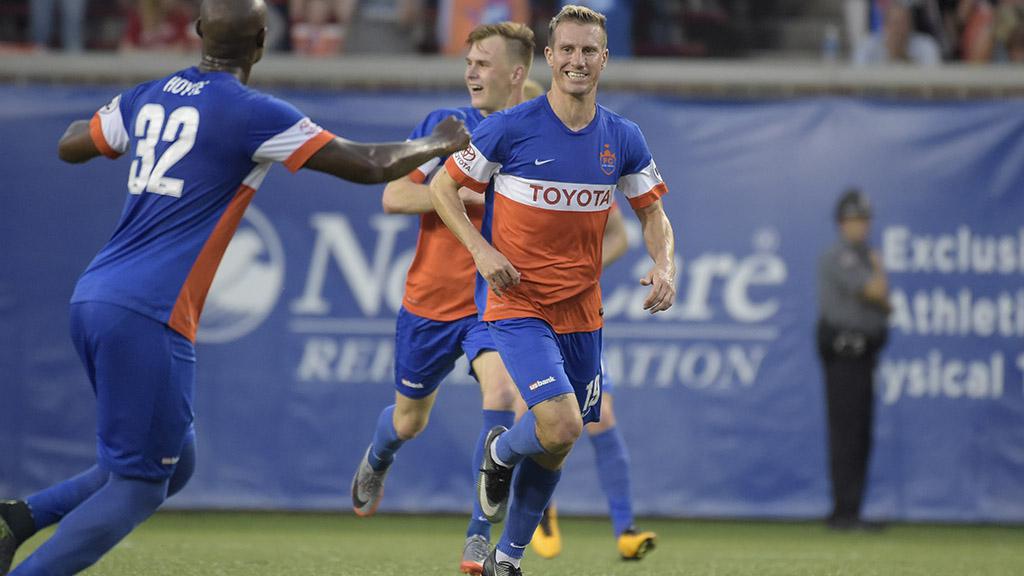 CINCINNATI – FC Cincinnati could have a very new look when it takes to the field for the 2018 USL regular season, with the club announcing on Wednesday it had currently retained nine players from its current roster for the club’s third season.

FCC announced it had re-signed Jimmy McLaughlin, Corben Bone and Danni König, and picked up contract options on the quartet of Kenney Walker, Matt Bahner, Garrett Halfhill and Justin Hoyte. Both Sem de Wit and Josu remained under contract moving into the 2018 season.

After a season that saw the high of reaching the Semifinals of the 2017 Lamar Hunt U.S. Open Cup, and the disappointment of a second consecutive Eastern Conference Quarterfinals exit in the 2017 USL Cup Playoffs, FCC President Jeff Berding said the postseason defeat to the Tampa Bay Rowdies this past weekend highlighted the need for improvements within the squad.

“We’re trying to make the whole team better,” said Berding at the club’s press conference announcing the moves. “The league’s gotten better. Those of our fans and others who follow this closely, the league was a lot more challenging this year, the talent level. The game we played on Saturday, Tampa’s roster, there wasn’t a roster like that in the league in 2016. They have world-class players, Marcel Schafer and a lot of guys on that team are big-time players that are new to the USL.

“We expect there will be more of that in 2018, and we have to adjust, and we have to get better, and part of getting better is coaching the players up and helping the players get better, and some of it is sometimes bringing in new additions to the roster who have a body of work both on the pitch and in their leadership style that will help us reach our ambitious goals.”

Among the mainstays for the club over the past two seasons, the club remains in talks with 2016 USL Goalkeeper of the Year Mitch Hildebrandt, defender Austin Berry and 2017 team-leading scorer Djiby Fall. The club also announced plans for Harrison Delbridge, Paul Nicholson and Andrew Wiedeman would be revealed at a future date.

The question mark over Hildebrandt’s return, after the goalkeeper led the USL with 100 saves in the regular season and was one of the standouts in the club’s run in the Open Cup, was addressed by FCC Head Coach Alan Koch.

“We’re still talking to him, obviously, but right now – to be completely frank – we don’t have our No. 1,” said Koch. “We’re not saying it’s not going to be Mitch, but we’re open, we’re talking to him, and we’re talking to other goalkeepers too. To reiterate what Jeff just said, we’re looking to improve the group across the board, not just the goalkeeping position, but in every position.

“We will carry three goalkeepers, Dallas [Jaye] and Dan [Williams] are no longer going to return to our group, so we know right now we definitely need to bring in two more ‘keepers, and we’re going to make sure it’s a very competitive group so that they’re going to push each other to get the most out of each individual, not only in the goalkeeping position but in every position too.”

Koch added that the process of rebuilding the squad for the 2018 season had already begun, with the FCC Head Coach set to head out on the recruiting trail this afternoon. As far as potential players, Berding was optimistic that the club’s reputation put it in a strong position moving forward.

“This is a great time for FC Cincinnati because there’s no shortage of players across the globe wanting to come to Cincinnati and play in front of our wonderful fans, 20,000-plus in Nippert on a weekly basis,” said Berding. “In an effort to address what is going to be an even more talented league next year we need to prepare appropriately in the offseason to be competitive and reach our ambitions.”