Monarchs sweep back to top after big week on road 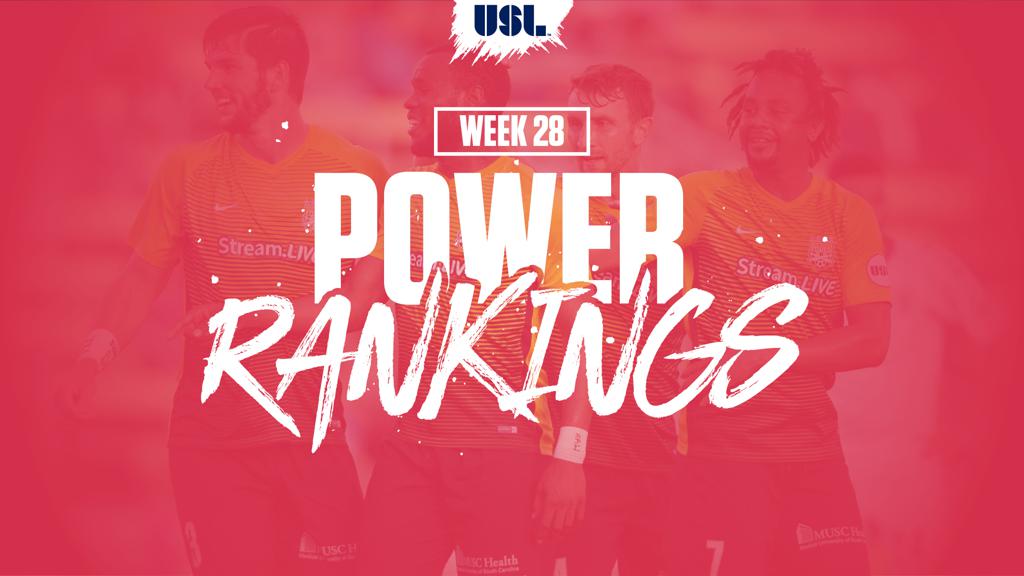 The past seven days were shaping up as a decisive week for Real Monarchs SLC. Thanks to two decisive victories on the road, it ended up almost certainly deciding the USL Regular Season Championship and re-established the Monarchs as the team to beat in the 2017 USL Cup Playoffs two weeks from now.

Back atop the USLSoccer.com Power Rankings, a unanimous selection, the Monarchs’ turning point in a 0-0 draw against Orange County SC a little more than a week ago that saw the team do everything but score was built upon in its victories against Sacramento Republic FC and Reno 1868 FC. Chandler Hoffman broke through the 15-goal barrier, Juan Mare notched his first two goals for the club and Andrew Putna picked right up where Connor Sparrow had left off in recording back-to-back shutouts.

Now needing only a point from Saturday night’s game with Vancouver Whitecaps FC 2 – San Antonio FC would still be able to catch the Monarchs on points in that scenario but not on wins – preparations for at least a minor celebration for what has been a remarkable season are now underway. But with the challenge of what the playoffs will bring, you’d think – and rightly so – that Head Coach Mark Briggs and company will be focused on earning the four wins that would make the side the third in a row to win both the USL Regular Season Championship and the USL Cup.

1. Real Monarchs SLC (50pts)
Last Week: W 2-0 at Sacramento Republic FC, W 3-0 at Reno 1868 FC
Maybe the most notable statistic to come out of this week for the Monarchs was its remarkable streak on penalty kicks. Real has now either saved, or had opponents miss, seven consecutive spot kicks. As we saw in last year’s postseason with the New York Red Bulls II, having that sort of record could come in very useful should the need arise come playoff time.

2. Swope Park Rangers (43pts)
Last Week: W 3-0 vs. LA Galaxy II, D 2-2 at Rio Grande Valley FC
The Rangers extended their undefeated streak to four games – just – after Kharlton Belmar’s late equalizer against the Toros, which also saw the striker move to an individual single-season high for the standout striker. That Swope Park was able to pull off that type of comeback on the road against a Toros side that is better than its record indicates showed some serious fortitude. Sunday’s game against OKC Energy FC should be an interesting one.

3. Louisville City FC (35pts)
Last Week: L 1-0 at Toronto FC II, D 0-0 at Rochester Rhinos
Louisville did not have an enjoyable week on the road by any means, but the side has clinched the No. 1 seed in the Eastern Conference playoffs anyway while sitting too far back of the Monarchs to claim the Regular Season Championship. With two games to go, and a trio of players called up to international duty this week, that’s probably just as well as the squad will look to get rested up before it kicks off the postseason at Slugger Field on Friday, Oct. 20.

4. San Antonio FC (30pts)
Last Week: W 2-0 at Tulsa Roughnecks FC
San Antonio FC is in theory the only team that can overtake Real Monarchs SLC for the USL Regular Season Championship, but after its good road win against Tulsa Roughnecks FC the side will be much more focused on a big final week that sees the side host three games with the goal of earning the No. 2 seed in the Western Conference. With a fascinating inter-conference game up first with the visit of the Tampa Bay Rowdies to Toyota Field, there’s plenty to look forward to for SAFC fans as the regular season closes.

5. Phoenix Rising FC (29pts)
Last Week: W 2-0 at Portland Timbers 2, L 2-0 at Sacramento Republic FC
Rising FC saw its club-record undefeated streak come to an end on Saturday night but not before the side had clinched its first trip to the playoffs. Wednesday night’s game, which will get the national spotlight as the USL Game of the Week on ESPN3, should provide a night to not only celebrate that feat but also get the side geared up for its first postseason appearance in two weeks.

6. Reno 1868 FC (28pts)
Last Week: L 3-0 vs. Real Monarchs SLC
Reno’s week went from so close to so far away, as its third defeat this season to Real Monarch SLC not only ended 1868 FC’s hopes of competing for the USL Regular Season Championship but also put the side under pressure for the No. 2 seed in the Western Conference. Reno’s visit to Orange County on Saturday night offers a chance to bounce back and potentially for Dane Kelly to seal the USL Golden Boot if the Jamaican forward is available for selection again.

7. Tampa Bay Rowdies (21pts)
Last Week: D 2-2 at Bethlehem Steel FC, D 1-1 vs. Bethlehem Steel FC
A week that had the Rowdies seeing double also left them still in control of their destiny when it comes to the No. 2 seed in the Eastern Conference. This week will be no easy task, however, with first a visit from the New York Red Bulls II and then a trip to San Antonio FC, both of which also sit in these rankings after good victories over the past weekend.

8. Charleston Battery (19pts)
Last Week: D 1-1 at Ottawa Fury FC
The Battery are in the playoffs thanks to their last equalizer against Ottawa Fury FC, with Heviel Cordoves on maybe his best run of form since arriving at the club with four goals in the past three games. Charleston could get a surprise challenge from the resurgent Harrisburg City Islanders this weekend, but will want to maintain its the upper hand on the Charlotte Independence before the teams meet on the final weekend of the season, when plenty could be at stake in terms of playoff seeding.

9. FC Cincinnati (11pts)
Last Week: W 1-0 vs. Charlotte Independence
It was by no means a great performance for FCC, but thanks to a brilliant performance off the bench by Kevin Schindler and Mitch Hildebrandt’s late heroics, Cincinnati got a major victory to run its undefeated streak to five games. FCC will be scoreboard watching on Saturday before it visits Ottawa on Sunday afternoon, and could have a playoff place on the line in its first trip to TD Place.

T-10. New York Red Bulls II (3pts)
Last Week: W 2-0 vs. Pittsburgh Riverhounds
A five-game home winning streak was a fine way to wrap up the Red Bulls II’s first season at MSU Soccer Park, and now the side will head to Florida for a week that will define its season. Wednesday’s game with the Tampa Bay Rowdies should be an entertaining one for fans, but the major attention will be on Saturday’s game against Orlando City B, which could determine which side reaches the postseason, and which misses out.

T-10. Sacramento Republic FC (3pts)
Last Week: L 2-0 vs. Real Monarchs SLC, W 2-0 vs. Phoenix Rising FC
Republic FC gets back into the rankings after ending Rising FC’s streak but still has something to prove when it comes to whether it can be a true USL Cup contender. Wednesday night’s visit to an Orange County SC, which is desperate for a win to keep its own playoff hopes alive, should provide insight as to whether Republic FC is going to provide anyone a scare if it reaches the postseason.