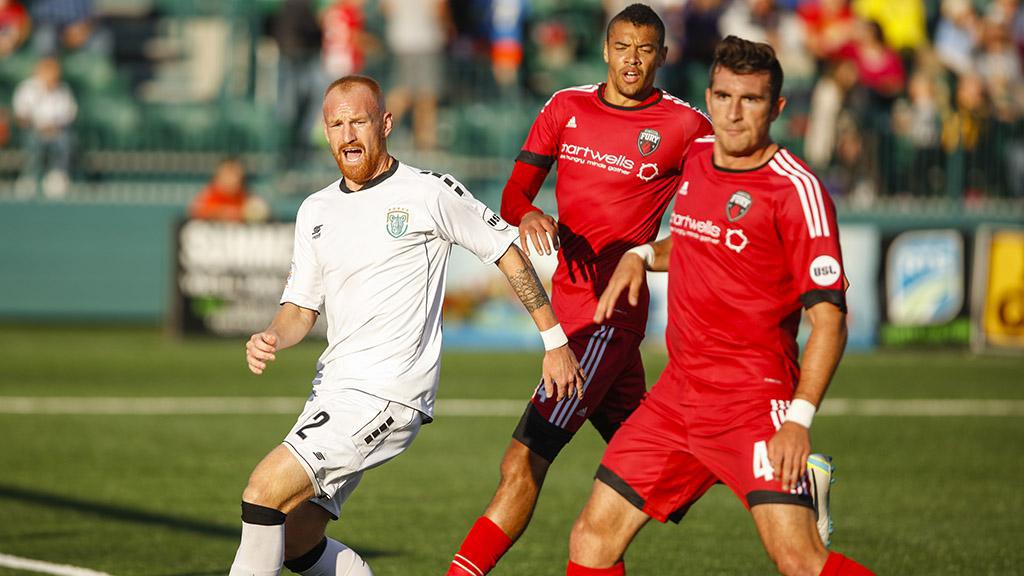 ROCHESTER. N.Y. – Steevan Dos Santos scored a fifth consecutive contest, but Ottawa Fury FC was held to a 1-1 draw by the Rochester Rhinos on Saturday night at Capelli Sport Stadium in a tense contest between the clubs. The game opened energetically, and Fury FC had the first good chance in the 14th minute as a short corner saw Carl Haworth find Steevan Dos Santos at the left post for a header that was comfortably saved by Rhinos goalkeeper Dan Lynd. Five minutes later, however, the Rhinos took the lead as a good move inside the penalty area saw Ryan James’ cross find Christiano Francois for a close-range header. Ottawa almost pulled a goal back just before halftime as a header by Dos Santos went just wide of the left post, while Rochester almost doubled its lead early in the second half as Fury FC goalkeeper Callum Irving made a good low save to deny Kenardo Forbes’ strong effort to the left corner. Jochen Graf also forced a near-post save by Irving from a tight angle on the left side of the penalty area a few minutes later. Dos Santos continued to threaten for Fury FC and had a volleyed finish well-saved by Lynd in the 69th minute. Two minutes later the former Rhino got his chance from the penalty spot after Andrae Campbell was brought down in the area, and Dos Santos slotted home into the right corner for his eighth goal of the season. Campbell then found the net, only to be ruled offside as the visitors continued to apply pressure, but the Rhinos almost grabbed the lead with eight minutes to go as Forbes’ shot missed the target high from 14 yards. Campbell again threatened for Ottawa with five minutes to go, forcing a tipped save from Lynd with a powerful shot, but neither side was able to break the deadlock late after Fury FC's Gerardo Bruna was sent off as honors ended even.

Andrae Campbell, Ottawa Fury FC – Campbell was strong throughout down the left side, winning the penalty kick that provided Fury FC’s equalizer and almost stealing the victory with a fierce late effort.