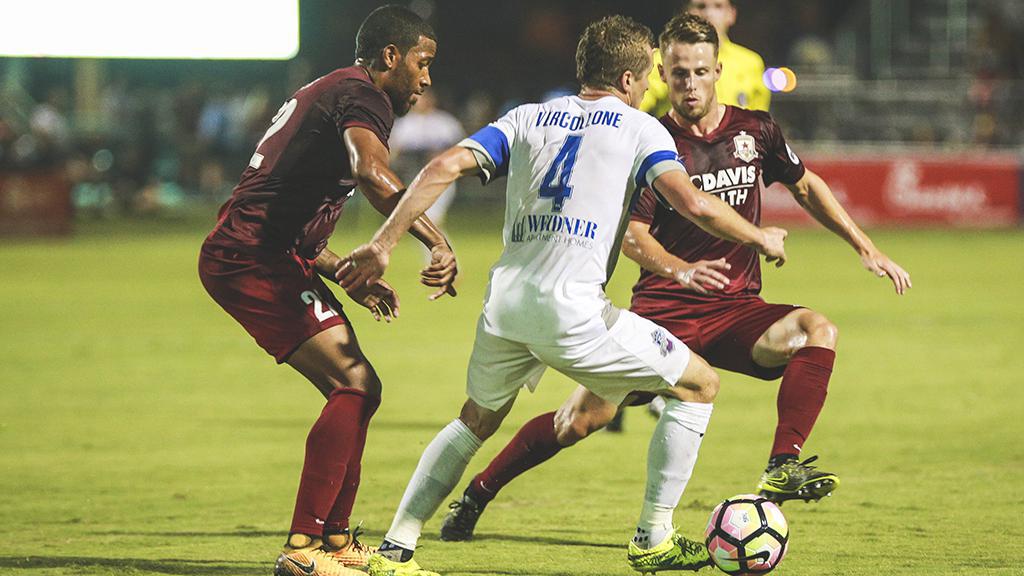 SACRAMENTO, Calif. – Pascal Eboussi scored in stoppage time as Colorado Springs Switchbacks FC took a 2-2 draw with Sacramento Republic FC on Saturday night in front of a sellout crowd of 11,569 at Papa Murphy’s Park. The Switchbacks threatened early as Kevaughn Frater’s chance was snuffed out by Republic FC goalkeeper Evan Newton. Luke Vercollone also went close from a free kick in the 21st minute, while Republic FC almost took the lead when Trevin Caesar skied a finish 15 minutes later when he was left open in the center of the penalty area. Sacramento took the lead in the 37th minute as Agustin Cazarez fired home a finish into the top-left corner of the net, but a minute later the Switchbacks leveled as Vercollone curled home a finish into the bottom-right corner to make it 1-1. Matthew Wiesenfarth’s first professional goal put Republic FC back ahead before the break, however, as Caesar seized on a loose goal kick and set up the midfielder for a composed finish. Blackwood almost added a third for Republic FC in the 58th minute, only for his header to float wide of the right post, while Cazerez fired a shot just wide of the left post from 25 yards with a fierce shot. Colorado Springs almost pulled level again with 16 minutes to go as Vercollone had an open shot well saved by Newton, but after Sacramento was unable to put away some late chances to put the game away, Eboussi rose at the back post to head home Kacher’s left-sided corner kick to level in stoppage time and steal a point for the Switchbacks.

Masta Kacher, Colorado Springs Switchbacks FC – Kacher recorded the assists on both goals for the Switchbacks, including a great back-post corner kick from the left to allow Pascal Eboussi to equalize in stoppage time.