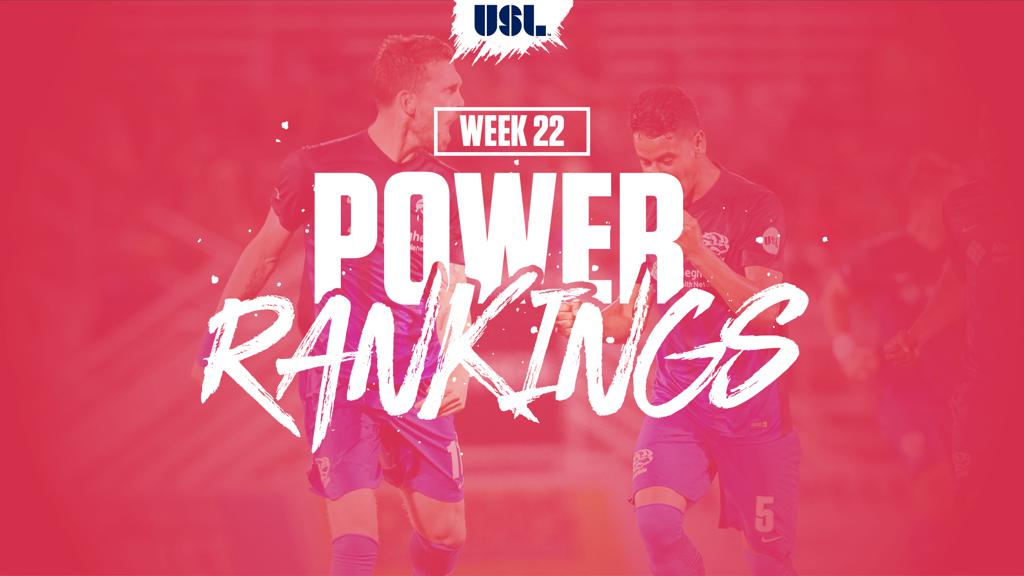 Real Monarchs SLC held onto its position at the top of the USLSoccer.com Power Rankings for Week 22 of the season, but Louisville City FC’s impressive road victory against Bethlehem Steel FC moved the Eastern Conference squad within a point of first in the poll as it moved within range of claiming top stop in the Eastern Conference after this weekend’s action.

Louisville – alongside Reno 1868 FC – is currently the hottest team in the USL with 12 points from its past five outings after Sunday evening’s victory against Bethlehem Steel FC. Despite a lack of Brian Ownby recent games due to injury, City has continued to roll as the club’s depth has come to the fore.

While Louisville has no-one sitting in the Top 10 in the USL in either goals – team-leader Luke Spencer is tied for 11th with eight – or assists – team-leader Oscar Jimenez is tied for 11th with five – the side is third overall in the USL with a +18-goal differential, which also stands as the best in the Eastern Conference. With the way he drills his team on a weekly basis, you’d expect there’s a good deal of pride for Head Coach James O’Connor and his staff in that fact.

With five of the club’s next six games at home, it might take a lot to knock Louisville from its perch either in the Eastern Conference standings, or the Power Rankings, over the next few weeks.

1. Real Monarchs SLC (46pts)
Last Week: D 2-2 at Swope Park Rangers
Things looked to be going to plan for the Monarchs in their visit to Swope Park on Friday night at halftime, but in the end, the side will likely be happy to take away a point and maintain its 10-point lead at the top of the Western Conference. If things go right for the Monarchs, it could clinch a first playoff place on Friday night with plenty of time to go on to earn its first silverware.

2. Louisville City FC (45pts)
Last Week: W 3-1 at Bethlehem Steel FC
Louisville’s depth on either side of the ball has been evident over recent outings, with the side taking four wins in the past five with eight different players finding the net in that span. Louisville will move top of the Eastern Conference with a win on Wednesday night against the Harrisburg City Islanders and could kick on strongly from there.

3. Reno 1868 FC (39pts)
Last Week: W 2-1 at Sacramento Republic FC
Reno continues to break new ground in its expansion season, taking the season series from its regional rival Sacramento Republic FC with victory at Papa Murphy’s Park on Saturday night. With 53 goals in 22 games, Reno has also taken possession of the best goal differential in the league and could have a chance at a top-three position should Sacramento do it a favor with a bounce-back victory against the Swope Park Rangers on Wednesday.

4. Charlotte Independence (37pts)
Last Week: W 1-0 vs. Bethlehem Steel FC; D 1-1 vs. Orlando City B
The Independence are still on top of the Eastern Conference for now, although they will have been disappointed not to put more pressure on Louisville’s pursuit with a win against a solid Orlando side on Saturday night. Charlotte is still on course for a top-two finish, however, which could be very useful given its undefeated record at the Sportsplex at Matthews (5-0-2).

5. San Antonio FC (24pts)
Last Week: D 0-0 at OKC Energy FC
The door cracked open for San Antonio to gain ground on Real Monarchs SLC after Friday night’s results, but SAFC was unable to take advantage as it held OKC scoreless at Taft Stadium for a second time this season. A midweek visit from Vancouver Whitecaps FC 2 should offer the chance for three points, and with a visit to Rio Tinto Stadium set for Sept. 2, the match does provide the chance to make inroads on Real’s 10-point lead.

6. Swope Park Rangers (20pts)
Last Week: D 2-2 vs. Real Monarchs SLC
The Rangers drew for a third consecutive outing, but their comeback against Real Monarchs SLC had a much different feel to the last two outings, signaling that a corner might have been turned for the squad. The team will certainly hope so, as a challenging trip to visit both Sacramento Republic FC and Reno 1868 FC awaits in the next seven days.

7. Charleston Battery (18pts)
Last Week: W 1-0 at Rochester Rhinos
The Battery claimed their first victory since 2012 on the road against the Rochester Rhinos thanks to Justin Portillo’s slightly fortuitous goal late at Capelli Sport Stadium. If you’re looking for an omen, that victory in 2012 sent the Battery into the USL Cup Final, which they ended up winning. Head Coach Mike Anhaeuser and his squad will be hoping it’s a sign of things to come as it faces longtime rivals the Richmond Kickers this Saturday.

8. Sacramento Republic FC (16pts)
Last Week: L 2-1 vs. Reno 1868 FC
Sacramento’s undefeated streak came to an end at the hands of Reno 1868 FC, which means the road to a top-four place in the Western Conference just became a little steeper. Republic FC will need to rebound well, too, with a visit from the Swope Park Rangers coming on Wednesday before a trip down to Phoenix to wrap up the week.

9. Tampa Bay Rowdies (13pts)
Last Week: D 1-1 vs. Ottawa Fury FC
The Rowdies have still only lost once at home this season, but with the road ahead littered with games away from Al Lang Stadium, the side might be disappointed it let its visitors control as much of the game as it did. A week off before heading to the Northeast could see the picture change around Tampa Bay as it rests up for the final push.

10. Tulsa Roughnecks FC (12pts)
Last Week: D 0-0 at Orange County SC
The Roughnecks could be considered unlucky not to have taken victory from the Champions Soccer Stadium last Tuesday night, but the silver lining for the side was seeing most of its challengers for a playoff position fail to pick up maximum points either. Wednesday’s game on the road against Saint Louis FC now looms large for both clubs in the race for the playoffs.