USL regular-season record crowd of 25,308 was largest in North America on Saturday 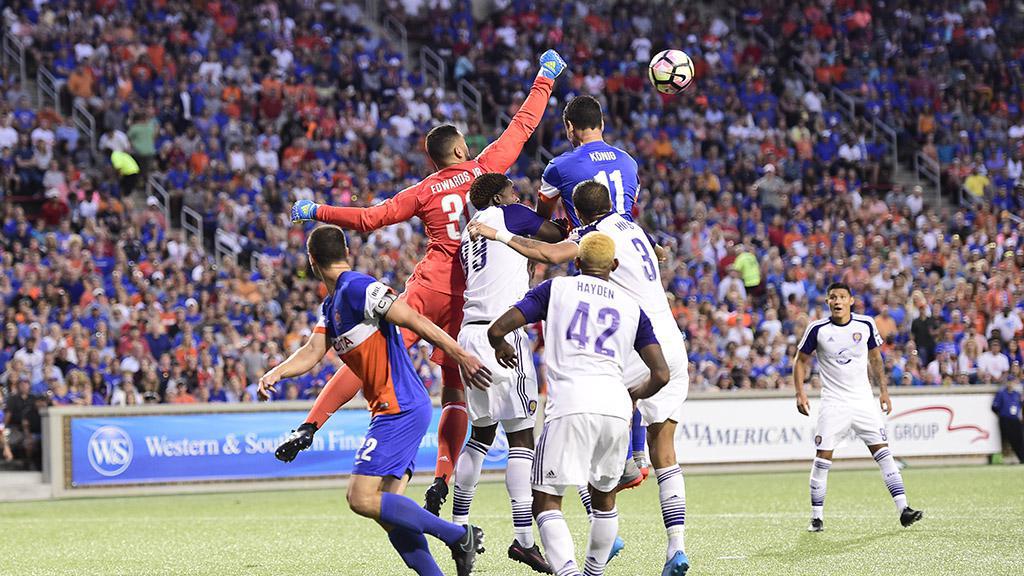 CINCINNATI – FC Cincinnati has rewritten the record book for USL attendance since joining the league in 2016, and on Fan Appreciation night at Nippert Stadium it was no surprise when the club raised its own USL regular-season attendance mark as a crowd of 25,308 saw the club welcome Orlando City B.

That was only part of the story on the night, though. With 29 professional games across the United States and Canada on Saturday night – the most in a single day in history – FCC’s attendance topped the list across all four professional leagues.

“I think tonight, with the high attendance, says so much about our city and what our club is continuing to do,” said FCC Head Coach Alan Koch. “You have everyone from college kids, to families, all around and we are just humbled by this support. This is so special and to have the fans stay through until the end was great. I’m happy to have shared a moment like that with everyone at Nippert.”

The fans were treated to another pulsating clash between Cincinnati and Orlando, who had already played two engaging contests this season. The hosts emerged with a 2-2 draw thanks to stoppage-time heroics from Danni König, whose goal off a deft cross by Kenney Walker denied OCB its second victory at Nippert Stadium this season. After piling on pressure in the final half-hour after the visitors had taken the lead 10 minutes into the second half, the crowd was sent into more wild celebrations at the end of a busy week for the club.

“We scored a goal in the 92nd minute to get a point, and that’s a major moment of the game,” said Kock. “That’s a reward for the group. Orlando was very good tonight and we had to make adjustments and substitutions early. I’m glad for Kyle [Greig] and Danni, while Mitch [Hildebrandt] also had some big-time plays and big-time saves tonight.”

Cincinnati had looked in complete control in the opening 10 minutes, with Greig’s first goal since arriving on loan from Vancouver Whitecaps FC putting the hosts ahead in the sixth minute. Two minutes later, Greig was pulled down in the penalty area, but OCB goalkeeper Earl Edwards Jr. turned the game in his side’s favor by saving Aodhan Quinn’s penalty kick.

Six minutes later OCB was level, a fine volley by Austin Martz from the top of the penalty area finding the left corner of the net after a half-cleared delivery into the penalty area. OCB held their own with the hosts – as they had in a 2-0 victory earlier in the season at the same venue – and when Cincinnati pushed more numbers forward early in the second half the visitors caught them with a perfect counterattack, Hadji Barry finishing coolly into the left corner of the net past Hildebrandt.

After the emotion of advancing to the Semifinals of the 2017 Lamar Hunt U.S. Open Cup on Wednesday night with victory against Miami FC, though, Cincinnati battled through to earn what is a valuable point in their push for a place in the USL Cup Playoffs. With a week off before next week’s final regular-season meeting with Louisville City FC for the River Cities Cup, the side was glad to take something out of a memorable night.

“It was a very emotional week for us, as we went through the high of Wednesday’s victory before knowing we needed to return for a USL match,” said Koch. “Our group came back tonight and fought until the end. I’m impressed with the character.

“As I always say, this game is about moments. We came out tonight with the right mentality from the start. Orlando had so much quality tonight that we had to keep up until the end.”