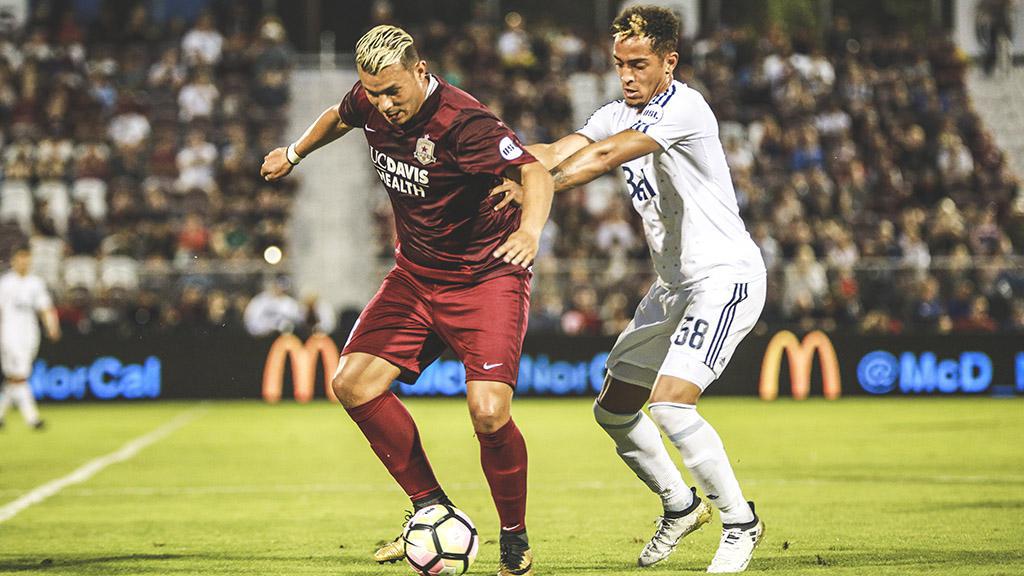 SACRAMENTO, Calif. – Sacramento Republic FC’s Jeremy Hall scored with eight minutes to go to earn his side a 1-0 victory against Vancouver Whitecaps FC 2 in front of a sellout crowd of 11,569 fans on Saturday night at Papa Murphy’s Park. WFC2’s Marco Bustos forced a good low save by Sacramento goalkeeper Evan Newton in the sixth minute, while Republic FC’s Wilson Kneeshaw shot wide from 12 yards a minute later as the teams exchanged early chances. Sacramento’s Trevin Caesar also headed over off a good cross by Sammy Ochoa in the 21st minute as the hosts continued to press to take the lead, but Republic FC was unable to capitalize on numerous chances before the break as Tyler Blackwood had a pair of chances blocked, and Ochoa sent a finish wide of the left post. Sacramento’s pressure continued into the second half, and Chris Christian almost found the opening goal in the 65th minute as Jeremy Hall’s free kick produced a powerful header, but an equally great save by Vancouver’s Spencer Richey with his right hand. Bustos again forced a good save from Newton with 15 minutes to go with a shot from the edge of the penalty area, but with eight minutes to go Blackwood was brought down in the penalty area for Republic FC, and Hall sent his penalty kick into the top-right corner of the net to give the hosts the lead, and in the end a valuable victory.

Jeremy Hall, Sacramento Republic FC – Hall kept his cool and produced a fine penalty kick to earn Sacramento victory, in addition to a solid display in the center of midfield that saw him win and distribute possession well.