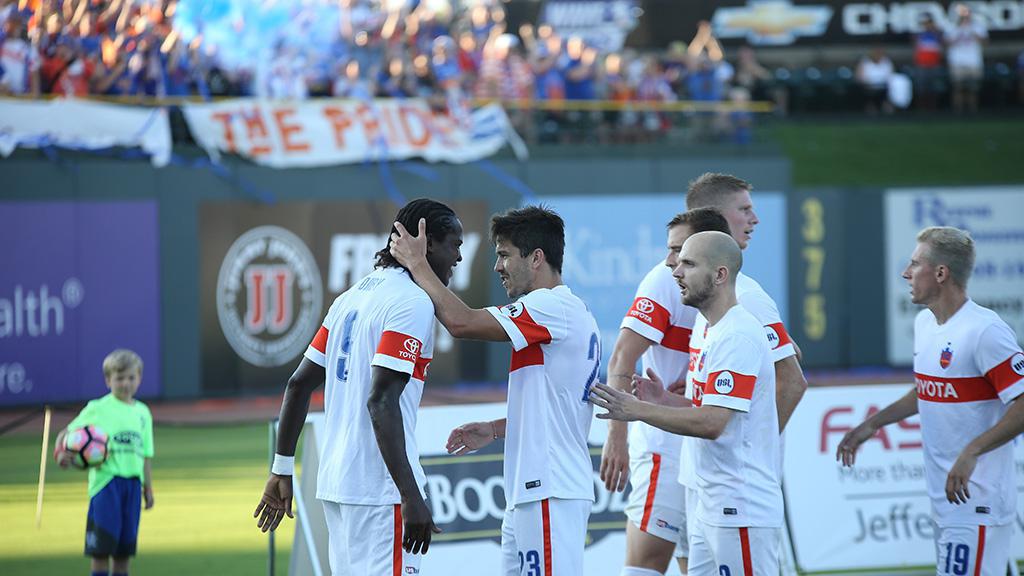 LOUISVILLE, Ky. – FC Cincinnati rallied from an early deficit to take a 3-2 victory against Louisville City FC on Saturday night as a Louisville club-record crowd of 11,632 was on hand for the second regular-season edition of the River Cities Cup this season. Louisville took the lead in the eighth minute from the penalty spot after FCC’s Harrison Delbridge was ruled to have handled in the area. Ilija Ilic stepped up, and his Panenka finish found the net as Mitch Hildebrandt’s early dive saw him see the shot float into the net. Cincinnati hit back eight minutes later as Louisville goalkeeper Greg Ranjitsingh was unable to claim a cross, and the ball fell to Djiby Fall for a first-time finish into the open net. Louisville almost regained the lead just past the half-hour mark as Brian Ownby’s finish beat Mitch Hildebrandt was cleared off the line by Josu, and Ownby went close again as he forced a save by Hildebrandt at his near post after skillfully getting past his marker on the right. Corben Bone also forced a low save by Ranjitsingh late in the first half, but Cincinnati took the lead 10 minutes into the second half when Josu’s corner from the right was nodded home by Delbridge. Louisville almost responded in the 67th minute when George Davis IV got onto a chipped pass by Ilic, but Hildebrandt clawed his finish to the right corner away. FCC then added to its lead with 13 minutes to go as Danni König scored with his first touch after coming on as a substitute after Ranjitsingh parried a fierce shot by Josu. Louisville pushed late to get back into the game, and grabbed a late goal in stoppage time as an own goal that caromed in off Andrew Wiedeman after a header by Luke Spencer, but Cincinnati held on to earn its first win at Slugger Field in its history.

Josu, FC Cincinnati – Josu came on as a first-half substitute, but had a massive impact with a goal-line clearance, an assist, and a hand in FCC’s clinching third to send the side to victory.