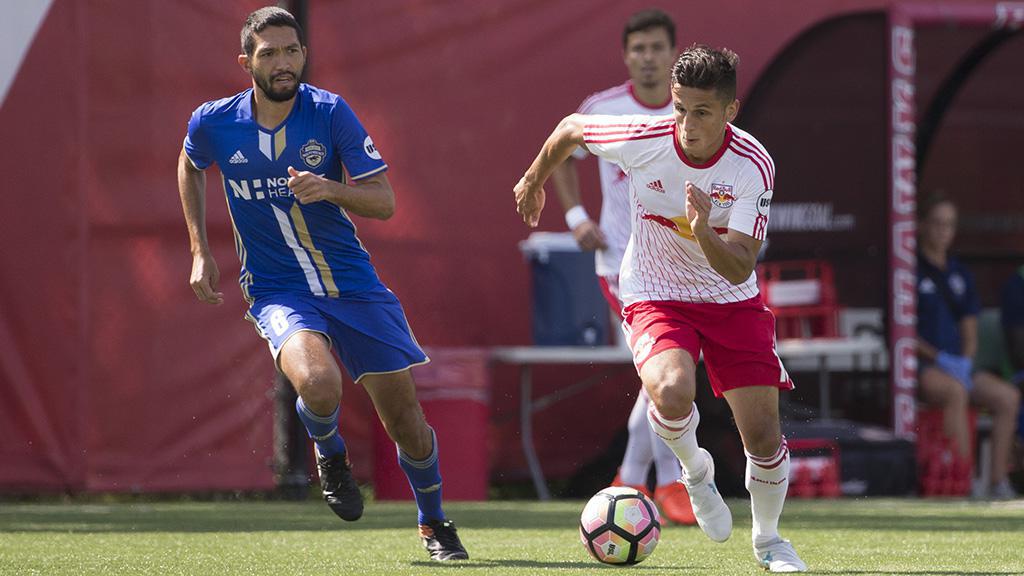 MONTCLAIR, N.J. – The Charlotte Independence scored three times in the opening hour, and then held on late, to earn a 3-2 victory against the New York Red Bulls II at MSU Soccer Park on Saturday for their sixth consecutive victory. New York forced the first big save of the game in the 15th minute, with Independence Cody Mizell deflecting a low shot by Douglas Martinez off a quick counterattack just over the bar as the effort jammed off the turf off Mizell’s leg and floated high. The Independence took the lead, however, as a free kick by Jorge Herrera curled perfectly over the wall and into the right corner in the 21st minute. Herrera almost set up another for the Independence, only for a slight deflection before his cross reached Austin Yearwood catching the defender out as he sent his header high. New York went close just before halftime as Dan Metzger’s free kick found Florian Valot, but his header was comfortably saved, while Charlotte’s Enzo Martinez flashed a shot just wide, but the Independence added a second in first half stoppage time as Red Bulls II defender Hassan Ndam turned a low cross by Joel Johnson into his own net. Martinez found the net eight minutes into the second half as a counterattack from a Red Bulls II free kick saw Yearwood find Herrera with a deep cross from the left, and the Colombian set up the 2016 USL Most Valuable Player Finalist for a simple finish. Johnson almost added a fourth with 18 minutes to go as he hit the left post with a low finish. The Red Bulls II tried to rally late, and pulled a goal back with eight minutes to go on David Najem’s low shot to the left corner. Junior Flemmings added a second for the hosts off Vincent Bezecourt’s eighth assist of the season from a corner, too, but the comeback attempt came up short as the Independence held on.

Jorge Herrera, Charlotte Independence – Herrera’s 50th goal in the USL regular season was reason alone to celebrate, but a sixth consecutive win made his strong performance all the sweeter.