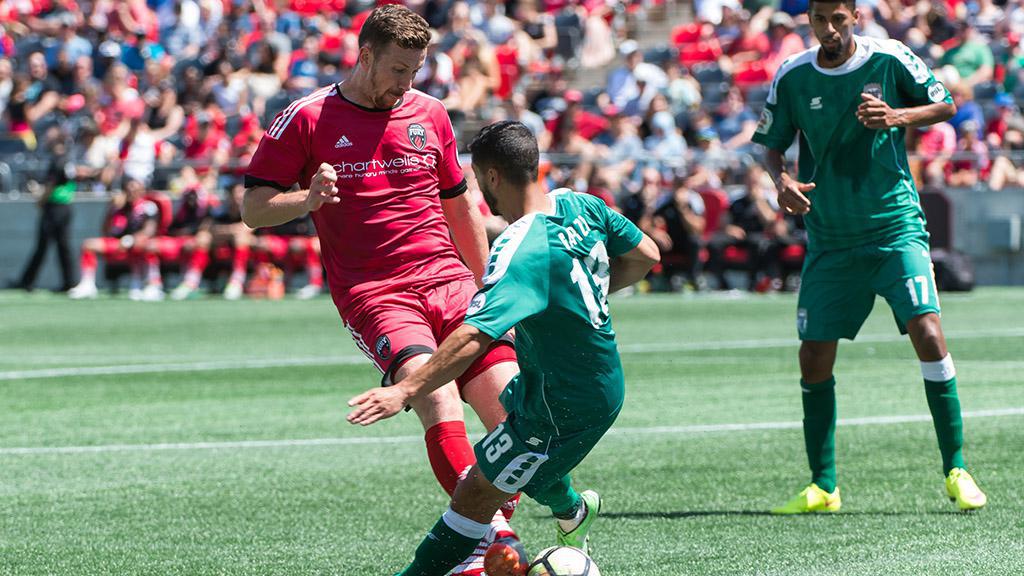 OTTAWA – Tucker Hume’s 89th-minute goal earned Ottawa Fury FC a 1-1 draw with the Rochester Rhinos in front of 5,525 fans at TD Place on Saturday afternoon as a late rally spoiled the Rhinos’ hopes of a third road win this season. Rochester (6-3-7, 25pts) opened the scoring with a terrific counterattack that saw Wal Fall spring Jochen Graf, who beat his defender the ball in behind, lift a finish that Fury FC goalkeeper Callum Irving got a hand to, only for Graf to tap home from close range to finish off the chance. Graf threatened again late in the first half as Irving was retreating after heading a clearance from outside his penalty area, with a quick pass by Ryan James to Graf leading to a shot from the left side of the area Irving got back in time to knock behind for a corner. Fury FC (5-6-6, 21pts) notched a pair of efforts in the opening half that called Rhinos goalkeeper Tomas Gomez into action, but the Rhinos continued to be the more dangerous side in the attacking third as the game entered the second half. Irving made a good save as Graf got a yard of space off a pass by Kenardo Forbes to try and put home his second of the game just past the hour-mark. Ottawa’s Ramon Martin Del Campo forced the first good save of the day for Gomez in the 69th minute, while the Rhinos’ goalkeeper was again called into action to gather another flicked effort by Tucker Hume as the hosts looked for an equalizer. Hume also headed high with three minutes to go, but then the tall forward grabbed the equalizer off a long throw-in by Carl Haworth with a minute to go to leave honors even.