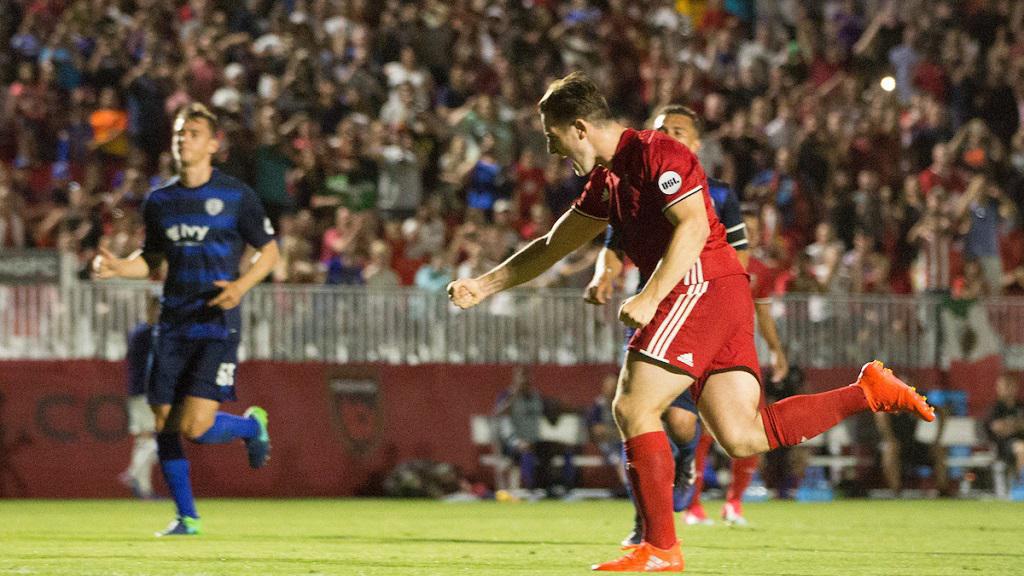 SCOTTSDALE, Ariz. – With new Phoenix Rising FC signing and Chelsea legend Didier Drogba on hand, his future teammates delivered a lasting impression on what he can look forward to Sunday at a sold-out Phoenix Rising Soccer Complex. Rising FC tallied three goals in a five-minute span in the opening half and ended up hanging on for a 4-3 victory against the last team carrying a perfect record this season, the Swope Park Rangers, in front of a sellout crowd of 7,162. Alessandro Riggi, Luke Rooney and Chris Cortez scored a goal apiece from the 23rd through 27th minutes, and Rooney added a crucial corner kick assist to Peter Ramage’s 47th-minute score as Phoenix won its second straight. The club did have to play the remaining 12 minutes and change down a man as Kody Wakasa was sent off for a foul in the box as the last defender against Swope Park’s attack. Phoenix improves to 2-2-0 (6 points) this season. The Rangers entered the game one win away from matching the USL record of eight consecutive regular-season wins held by Orlando City SC’s 2014 team. The Rangers saw the extension of that seven-game winning streak come to a close quickly, or so it seemed. Kevin Oliveira sprung some life into the Rangers' offense as he converted a 79th-minute penalty kick and then added a goal in the 90th minute. Swope Park captain Christian Duke got into the scoring act with a long-distance, second-half stoppage time tally to make things interesting, but the visiting side would end up one goal short. They are now 3-1-0 (9 points) overall.

USLSoccer.com Man of the Match:
Luke Rooney, Phoenix Rising FC – Rooney converted a penalty kick, set up Peter Ramage’s tally - which proved to be the game-winner - and distributed well throughout the game as Rising FC.