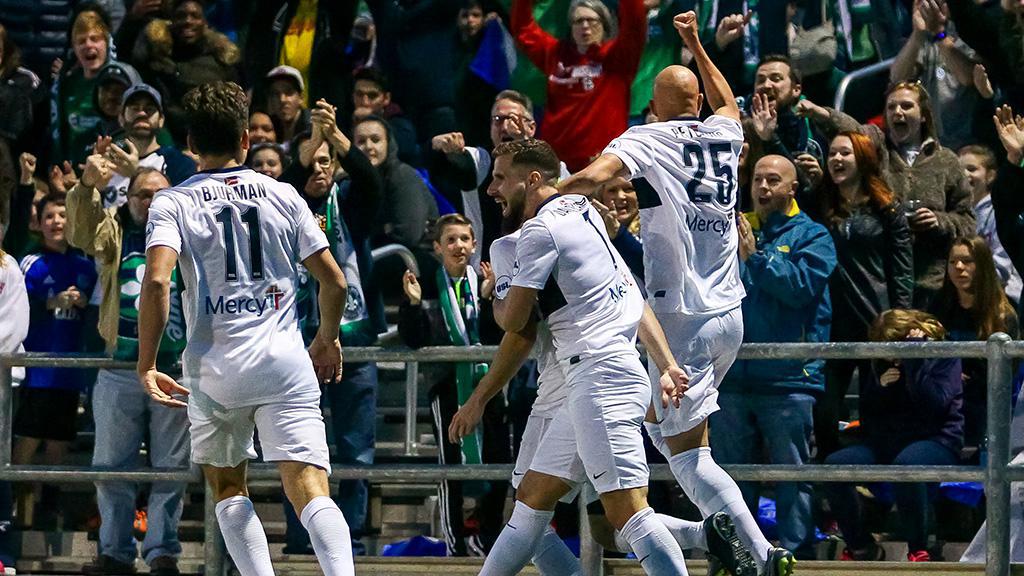 FENTON, Mo. – Saint Louis FC grabbed a dramatic late winner in a 3-2 victory against USL newcomer Ottawa Fury FC in front of a sellout crowd of 5,566 at Toyota Stadium – Saint Louis after losing an early two-goal lead. The game got off to a roaring start as Christian Volesky first opened his account for Saint Louis, and then set up Mats Bjurman for a second less than 10 minutes into the contest. Fury FC hit back as Gerardo Bruna found Eddie Edward for a finish on a near-post corner in the 11th minute, but Saint Louis carried more of the play for the remainder of the half to remain ahead at the break. Fury FC began to press early in the second half, and Eddie Edward had a low shot from the center of the penalty area well-saved by Saint Louis’ Devala Gorrick as it came through traffic. Gorrick made another big save to deny Ramon Martin del Campo on the hour-mark, but was unable to deny an equalizer with seven minutes to go as Onua Obasi placed a shot through a forest of bodies that just squeaked in. Saint Louis grabbed victory at the death, however, as Max Alvarez’s clipped finish was turned into his own net by Sergio Manesio for the winner with two minutes to go.

Christian Volesky, Saint Louis FC – Volesky had a goal and assist in his home debut for STLFC, and also played a key role in the late winner as Preki earned his first win the club’s Head Coach.