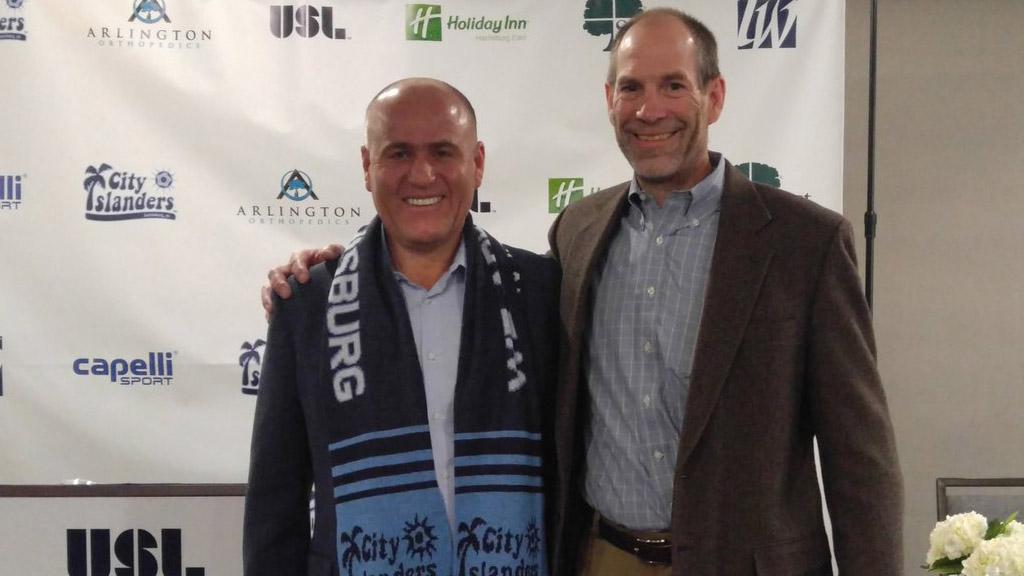 Altirs and his team will oversee the technical side of the club, including player and staff selections, transfers, and outside, non-local partnerships for the Harrisburg City Islanders. In addition, through his experience running youth and professional clubs, Altirs will support the front office and day-to-day decisions of the professional soccer organization.

"It's an exciting opportunity to bring our experienced staff and proven standards to the Harrisburg City Islanders and its fan base," Altirs said. "With our philosophy, resources and work ethic, I am confident that we will assist in bringing a new era of professional soccer to Harrisburg as we embrace our Division II club status."

Altirs has made a generous contribution to the soccer community in the United States since his arrival in 1980. Born in Lebanon, the determined entrepreneur moved to New York with the intention of owning his own business.  His vision led to the creation of GMA Accessories Inc., a manufacturer and importer of children and women's footwear, apparel, and fashion accessories.

Capelli Sport was founded in 2011 by Altirs with the mission to provide quality, functionality and design for high-level performance on the field. More than 25 years in the apparel, fashion and accessory business led to the creation of Capelli Sport and many global recreational, club, semi-professional and professional partnerships through the brand's innovative, world-class training gear, equipment and uniforms.

As of winter 2017, Altirs has been named a 30 percent owner of Premier League Professional Team and Development Academy Club Inter Allies, which competes in the top professional league in Ghana, the Ghanaian Premier League.

CSA began as a small, ambitious club, focused on providing the top development opportunities to players in the Northern New Jersey area. Within six years, it has grown into one of the most successful youth soccer academies in the United States, focused on promoting the principles of good citizenship, good sportsmanship, and teamwork through the knowledge of, and participation in, the competitive sport of soccer.

Today, CSA has grown to eight branches throughout New Jersey and New York, two of which, Bergen County and Monmouth County, NJ, are official member clubs of the United States Soccer Development Academy (DA), with the Monmouth County branch holding both boys and girls DA membership status. CSA has also expanded to Peru with the club's first international development academy. Additionally, through Altirs' initiatives, CSA and MSV Duisburg have developed a relationship that provides CSA players a direct connection to the professional European team.

Altirs has used his business ventures to connect his franchises in a way that continues to aid in the development of soccer's youth athletes throughout the United States, Europe, South America and Africa.

Through Altirs' involvement and ownership in the game on both the youth and professional level, the Harrisburg City Islanders organization will now join this international network, which will lead to the growth and development of all organizations.

Altirs aims to bring his business and soccer experience to Pennsylvania in 2017 to help the club grow and continue its rich history, while keeping pace with the growing USL and its teams.

Altirs will join the Harrisburg City Islanders in 2017 as they enter their 14th season as a member of the USL and compete for the first time with Division II status.

"We see and understand the value of Division II status here in the United States," Altirs said. "Being recognized as the second division of professional soccer, just under MLS, is a tremendous opportunity for all members of the club. It will lead to increased efforts to make sure this historic franchise experiences continues success."

"On behalf of my partners, we are thrilled to add George Altirs to our ownership group. George is an influential and powerful figure in soccer worldwide who has earned the respect of officials of the USL, USSF, and beyond," stated Pettis. "The resources and business acumen that George brings to the club allow us to stay in Harrisburg and build an international developmental base that is unique and exciting. Given the growth of the league and our advancement to the second Division in the USSF, it was imperative to partner with someone of Georges stature and integrity and spectators will see immediate improvements on and off the field. We had a number of attractive offers, but joining forces with George Altirs was the best decision."

"Joining this specific ownership team is a tremendous honor," Altirs said. "We will ensure our opportunities and channels are focused on brining the City Islanders to the top of the USL to provide a great product for our incredible fans."