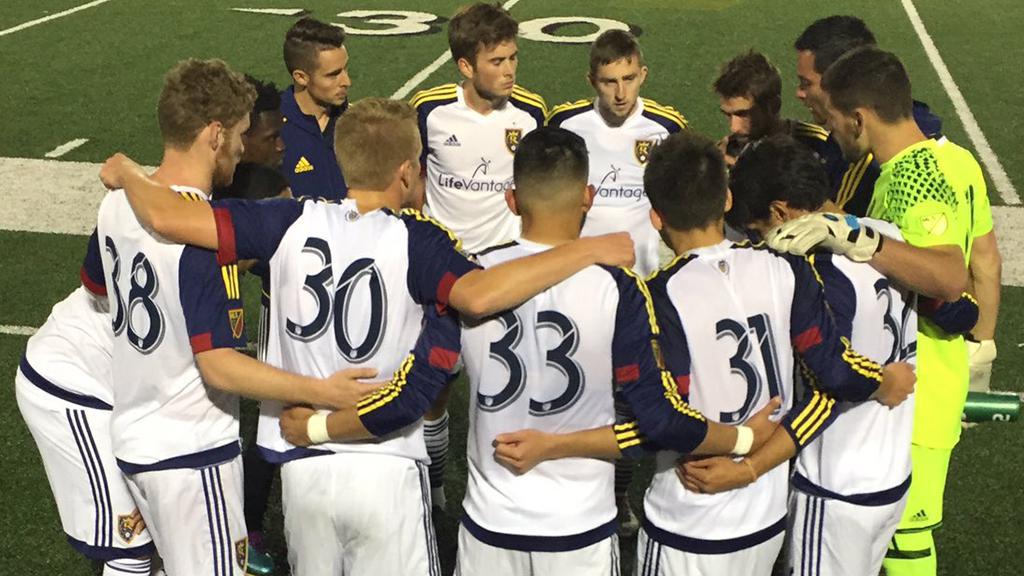 VENTURA, Calif. – Real Monarchs SLC continued their preseason preparations on Wednesday night with a 2-1 victory against the Premier Development League’s Ventura County Fusion at Ventura College. Goals by Chase Minter and Charlie Adams gave the side a two-goal advantage before the Fusion scored a late consolation goal.

“I think it’s an extension of preseason,” said Monarchs Head Coach Mike Petke. “It’s our third game right now, we saw a lot of positive, but we saw a lot of things that need to be worked on, and that’s expected right now. It gives us ammo through video that we can show these guys tomorrow, and we can break it down and improve from it. So, overall it was a positive experience, it’s always good to get the win, and like I said there’s things to be worked on, but there were some really good things that happened tonight.

Sebastian Velasquez almost gave the Monarchs the lead in the 13th minute when he drove past the Fusion defense toward the top of the penalty area, only to pull his shot wide. Skyler Milne was also active as the Monarchs pressed the Fusion’s back line to good effect, but it was Minter who gave Real the lead in the 33rd minute as he capitalized on a through-ball by Velasquez for his second goal of the preseason.

Ventura County went close to equalizing early in the second half when the Fusion hit the post on a free kick, and then saw a shot go just wide inside the opening 10 minutes of the half. The Monarchs then got back on the front foot, and a good piece of play by Chris Fourcand and Nick Barreiro played Fourcand in down the right to earn a corner. Fourcand then had his shot from the corner blocked, and Eric Iloski’s shot on the rebound went high.

That passage of play was typical of Fourcand, Barreiro and Iloski’s night, with the trio having joined the Monarchs from the RSL Academy in Arizona for the contest. Petke said he was pleased with the way they performed as the club looked to build a stronger connection between the Monarchs and the Academy this preseason.

“You can tell that Martin [Vasquez] and the entire academy staff down Arizona have done a phenomenal job in teaching the game to these kids,” said Petke. “I thought they were amongst the three best players in the game for us tonight, just in their movement, their understanding of the game, and that’s the reason why we have them in for this, because we want to have that connection be stronger with the academy, and it’s first of many opportunities for players like them to come up and show what they’re about, and get integrated with the team.”

Iloski almost created a second for the Monarchs on the hour-mark when he beat his man and sent a low cross into the penalty area, but it deflected off Emmanuel Ocran, which took it out of the path of Fourcand. Adams found a second from a free kick soon after, though, as the Fusion were whistled for a pass-back to the goalkeeper.

The Fusion scored in the final minute to grab a consolation, which put a slight damper on the performance, but midfielder Nick Besler was pleased enough with the overall performance.

“First and foremost getting the win was obviously really important, build some momentum,” said Besler, an offseason addition from the Portland Timbers 2. “Winning and losing are habits, so getting the W is really nice. Obviously there are some things we can work on, some things that were good out there, a couple of goals is really nice to have, we’ll build on that, giving up the goal late on is something we’ll need to work on, but we’ll take a look at the tape and continue to build on things for our next game on Saturday.”

The Monarchs will face off with the LA Galaxy II on Saturday as their preseason continues to move toward the club’s opening game of the season on March 25 at the Portland Timbers 2.