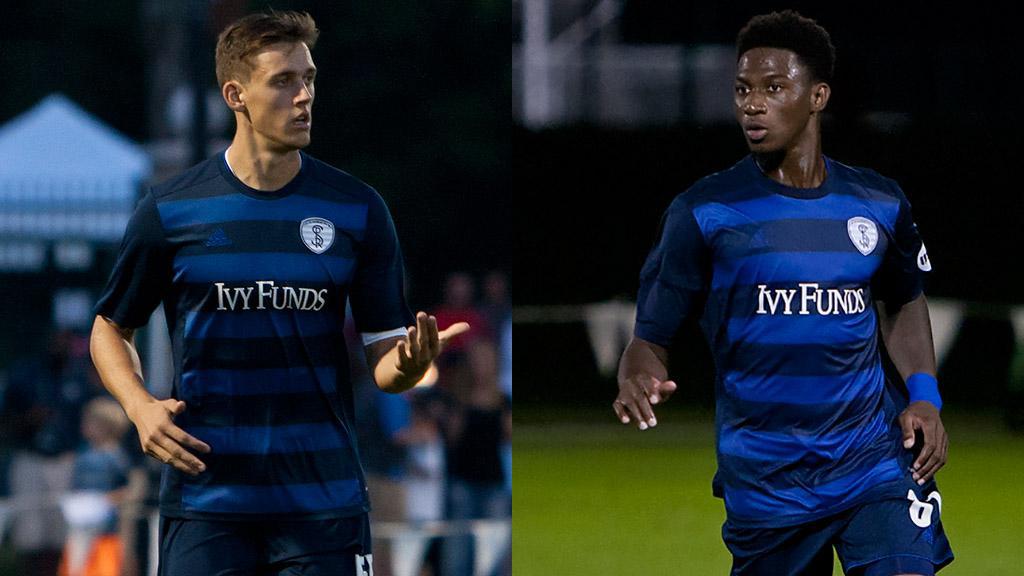 It wasn’t until June 26, on the road against Seattle Sounders FC 2, that Amer Didic and Oumar Ballo started together at center back for the Swope Park Rangers.

And while there have been some interruptions since then, going into this Saturday’s USL Western Conference Final of the 2016 USL Cup Playoffs, the duo has become a pretty clear key to the Rangers’ remarkable success in their inaugural season.

“After the first couple of games, I looked at him and said, ‘Hey, we’re not losing our positions,’” Ballo said this week. “‘I’m telling you right now, if we keep playing the way we’re playing, stay solid, persistent, we’re going to be a force to be reckoned with.’ Looking back on it now, I think it’s safe to say we’ve done our job.”

As the Rangers lineup has evolved throughout the club’s inaugural season, the fact it took a while for the duo to be identified shouldn’t be a big surprise. When the season began, experienced veterans such as Tommy Meyer and Jacob VanCompernolle were penciled in as the starting center backs, opening the season against the Portland Timbers 2 for the first game in SPR’s history.

As the season went on, it was Didic who first came to the fore. A standout at Baker University in the NAIA, the 21-year-old quickly drew attention for his technical style and composure which helped the side build from the back. Didic was called into Sporting Kansas City’s squad for the CONCACAF Champions League, which in his first appearance saw him go up against a name he easily recognized. 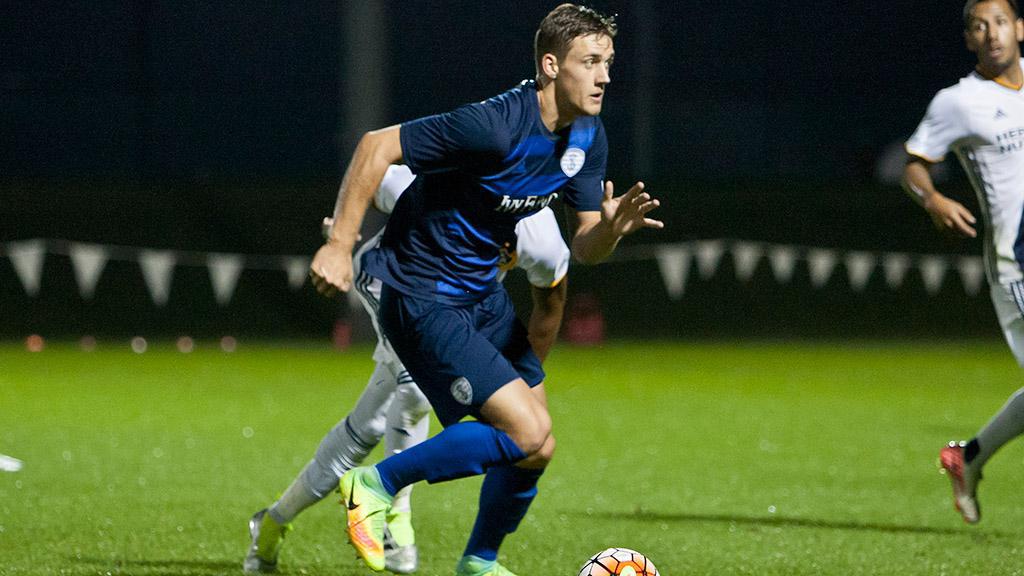 “That first game against Central FC, Peter Vermes was like, ‘You’ll be up against Kenwyne Jones. You remember him?’ and I was like ‘yeah, I grew up watching him on TV,’” Didic said. “Playing in those games, it was so invaluable for me in terms of experience, because individually my goal is to try and advance to that level. By having those three games, it definitely opened the door to figure out and see what that level of play is.”

Didic applied what he learned each time when he returned to the Rangers. But 13 games into the season, the newly assembled squad hadn’t quite clicked into gear. A 4-7-2 record had the side outside the top eight in the Western Conference as it entered Seattle for Ballo’s second start of the season.

The first hadn’t gone well for the former Houston Dynamo SuperDraft pick, as he was sent off in the first half on the road against Saint Louis FC. After a 2-0 win against S2, though, things started to turn around. The differing attributes the two had found worked well together in preseason continued into their first start together.

“During preseason we both talked about how much we liked playing next to each other, so that was a part of it, and then both of us work as hard as we can,” Ballo said. “I’m a bit more on the fast side and the raw side, and he’s more technical, so we complement each other in the ways that we feed off each other. What he doesn’t get, I cover him, and what I don’t get, he covers me.” 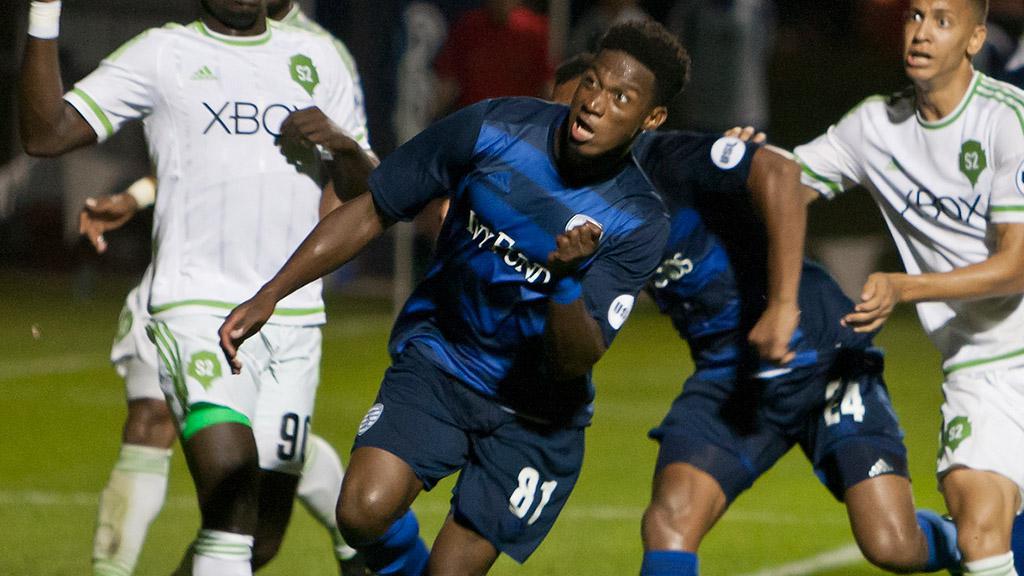 The pairing didn’t stick completely at first, but when they started together in the center, good things started happening for the Rangers. Swope Park made a big second-half run to not only reach the playoffs, but take the No. 4 seed, and a guaranteed home game in its first postseason. Remarkably, the side has still never lost (12-0-2) when Didic and Ballo have started at center back together.

That streak was put to the test this past Sunday in the Western Conference Semifinals. Reduced to nine men in the second half against Orange County Blues FC as the teams went to overtime tied, Swope Park was up against it in terms of defensive pressure. Even with the side coming in on a seven-game winning streak, its confidence could have been tested.

“When the second red card comes, I looked around, and I could tell for just that one second that there was a little bit of doubt,” said Didic. “But then, as the game went on, we changed our formation, made some substitutions, I look around and say, ‘Hey, this game is ours.’ I remember telling some of the guys, Coach Marc [Dos Santos] and Niko [Popovic] telling us, ‘This is our game,’ and so we perched back, we sat back, we absorbed pressure. They were whipping balls in from outside, we kept on defending, really hard, gritty defending, which is what you need in those types of situations.”

Ballo proved to be the star for the side as Dane Kelly’s goal earned a 2-1 victory, and the right to host Vancouver Whitecaps FC 2 this Saturday. Named the Rangers’ Man of the Match following the game, the 25-year-old led a strong rearguard action to preserve the win in the second overtime period.

“That game, I just blacked out, honestly,” said Ballo. “It was a game of sheer emotions, and it was a game where you didn’t know what was going to happen, but we all put our best foot forward, and it makes me very proud that I have a team that never stops working, never stops believing that no matter what situation we’re in, we’re always going to get out of it.”

“The guy put in an absolute beast performance, winning balls in the air, winning balls on the ground,” added Didic, “but it was definitely something that as a team we jelled together and decided that we weren’t going to lose.”

With the team’s winning streak now at eight games, the Rangers are looking to carry that same spirit into Saturday night’s contest against a WFC2 side that took victories against it twice early in the regular season.

But that the Rangers are in this position at all is an exciting proposition for the team’s defensive centerpieces.

“If you tell me a year ago, at the end of my college career, that I would be this close to playing in a USL championship, I never really had that chance in my past in college to go this far in a tournament, so it’s definitely something I’m excited about,” said Didic.

“[To] make it to the final – especially in the first season of our club – is an amazing experience, and to be part of it is mind-blowing,” added Ballo. “It’s been a wonderful ride, and it’s been a roller coaster of a ride, up and down, but things are looking up, and it’s amazing to continue this run.”