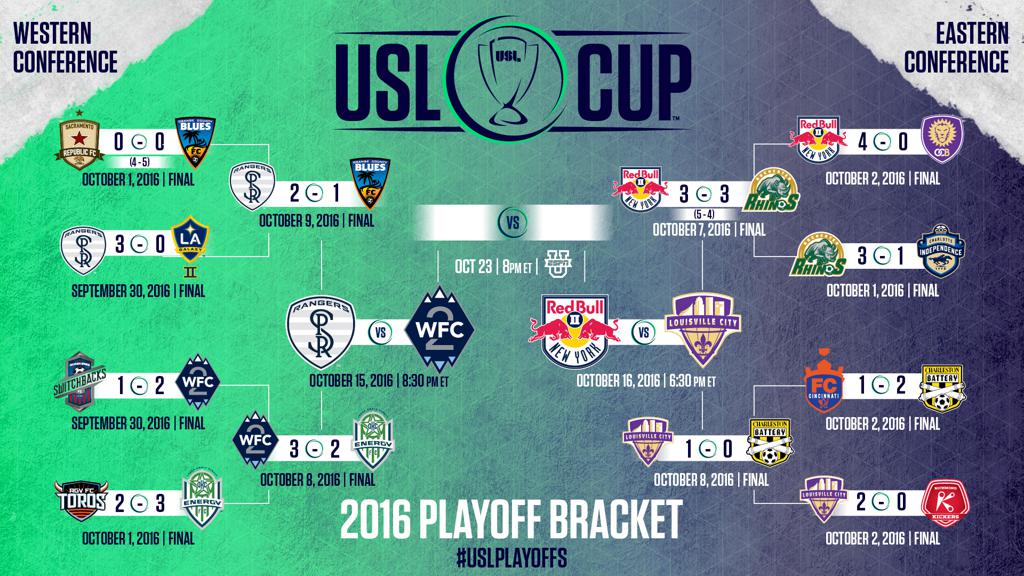 The 2016 USL Cup will air live on ESPNU on Sunday, October 23 at 8 p.m. ET. Every other game of the 2016 USL Cup Playoffs will be available on the league’s Playoffs Center, with updates from across the league also available via Twitter, Facebook, Vine and Instagram.

The top two teams in the Eastern Conference regular-season standings will meet for the conference championship on Sunday night. The New York Red Bulls II defeated defending champion the Rochester Rhinos 5-4 in a thrilling penalty shootout after the sides had played to 3-3 draw that saw Brandon Allen score in the 119th minute to tie the score. Louisville City FC held sway at home for a second consecutive season against the Charleston Battery, meanwhile, as Kadeem Dacres had the only goal in a 1-0 victory in front of 6,581 fans at Slugger Field.

The Western Conference had drama in both of its contests, as a Swope Park Rangers side that ended regulation with nine men took a 2-1 overtime victory against Orange County Blues FC on Dane Kelly’s 25-yard finish. Meanwhile, Vancouver Whitecaps FC 2 grabbed a 3-2 victory against OKC Energy FC after squandering a two-goal lead in the second half to its visitors, as WFC2’s Daniel Haber struck in the 89th minute to lift his side to a victory at Thunderbird Stadium.