No. 6-seed overcame wonder-strike in Cincinnati to book clash with Louisville 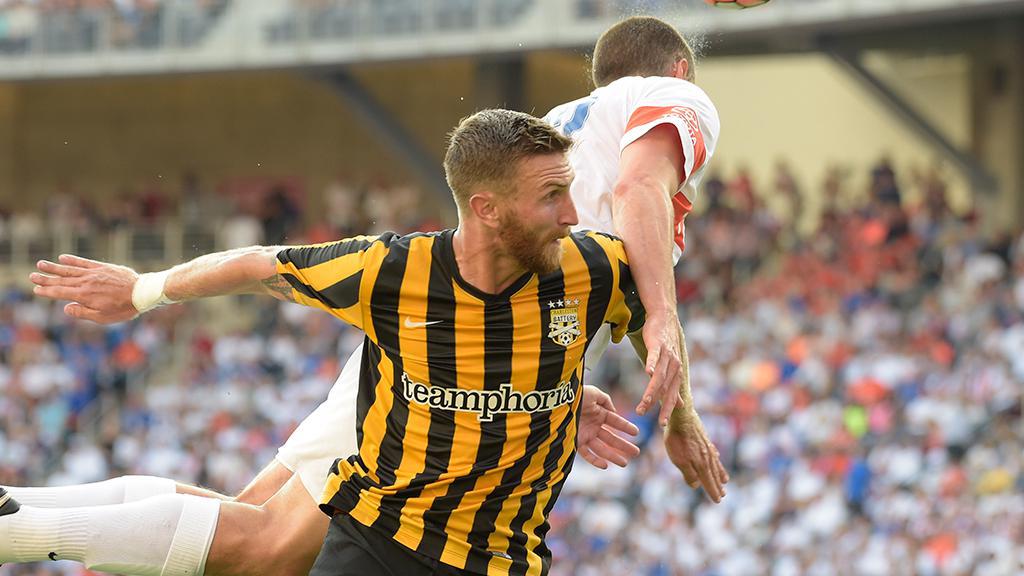 CHARLESTON, S.C. – Having been welcomed by a crowd of 19,229 the first time they visited FC Cincinnati at Nippert Stadium, the Charleston Battery knew what to expect in Sunday’s Eastern Conference Quarterfinal clash at Nippert Stadium.

Still, for veteran center back Taylor Mueller, the experience of lining up in front of a USL Cup Playoffs-record crowd of 30,187 was still one that resonated.

“When you’re warming up, it’s filling up, but when you walk out and it’s the starting lineups and everything, it was pretty unbelievable,” Mueller said.

Also unbelievable? The goal by Eric Stevenson that put the host ahead in the 19th minute, a rocket from 30 yards into the top-right corner of the net that landed on that night’s ESPN SportsCenter Top 10.

“After a goal like that gets scored on you, it’s not an error on our midfield or our defenders,” said Mueller. “Yes, someone could have come out and pressed him a little sooner, but when he hits a shot like that, and even [Coach Mike Anhaeuser] goes, ‘when the guy hits the shot from 30, 35 yards out and hits the top corner, what are you going to do?’ You just put your hand up, it’s a good goal, there’s nothing else you can do about it.”

The focus quickly shifted to making sure Stevenson’s strike was the only damage the side would absorb. Able to hold FCC’s attack in check for the remainder of the first half, Chris Tsonis’ goal four minutes before halftime proved pivotal. Not only did it pull the visitors level, but it gave the side a big confidence boost as it went into the break.

“I think that made all the difference in the game, because we could get settled, we could come back again like we did at the start of the game, and I think you saw in the second half we were able to put a little more together instead of just watching them attack and sitting back and defending a little bit,” said Anhaeuser. “We were able to open up, have a little more confidence, and the guys moved the ball a lot better and were getting forward into good positions at the start of the second half. I think that put them under pressure and really helped us a bit.”

When the second goal arrived, off a now-standard near-post corner kick by Maikel Chang that found the head of Zach Prince, and then the back of the net via an FCC defender, the focus to remain tight at the back returned.

“Zach turned to me right before kickoff and says, ‘hey, make sure we’re organized and everything is tight for the next 10 minutes,’ because I think a lot of us knew that would be it if we didn’t give them another opportunity shortly we would be able to prevail and advance to the next round, and that’s exactly what happened,” said Mueller. “We made a couple of subs, got fresh legs in and actually played pretty smart in the last five, 10 minutes there to try and kill time off as much as possible.”

Players like Prince and Mueller, both of whom were with the side when it claimed the USL Cup in 2012, have been invaluable for Anhaeuser this season, with the continuity the core group has been able to provide a strong foundation for the USL Hall of Fame Coach to build around. Even while there are some new faces most seasons, this year’s being the likes of loanees Romario Williams (Montreal Impact) and Alex Tambakis (Atlanta United FC), players like Quinton Griffith, O’Brian Woodbine, Justin Portillo and Shawn Ferguson have provided a continuity that shows on the field.

“I think the continuity and cohesiveness that we have, we know what other players are going to do and what we’re going to get out of other players,” said Mueller. “It might not even be a conscious thing with us. If we know the style a player plays, and we’ve been with them for this long and we’ve seen them play a certain way, I think it’s an unconscious thing that if I have Q [Griffith] or Obi [Woodbine] on the outside, and he’s one-v-one, I don’t need to rush over there and worry about them getting beat one-v-one, because I know they’re going to do their job. I think that’s all across the field.”

As they hit the road to face another big atmosphere this Saturday in Louisville, the Battery’s experience in Cincinnati will stay with Mueller for a while.

“It’s pretty incredible what they’ve done, and the fans in general; it wasn’t an experience that was negative for us on our side,” Mueller said. “The fans were really good, they weren’t too rowdy – you’re always going to have a few fans that no matter what you do they hate you because you’re on the other teams – but in general they weren’t like that. Even when we were leaving the field, most of them were tipping their hat to us, even after we had showered and stuff there were still a good amount of fans left there talking with players, so it was very humbling, and a very great experience for me.”