The regular season’s over. Who’s got momentum going into the playoffs? 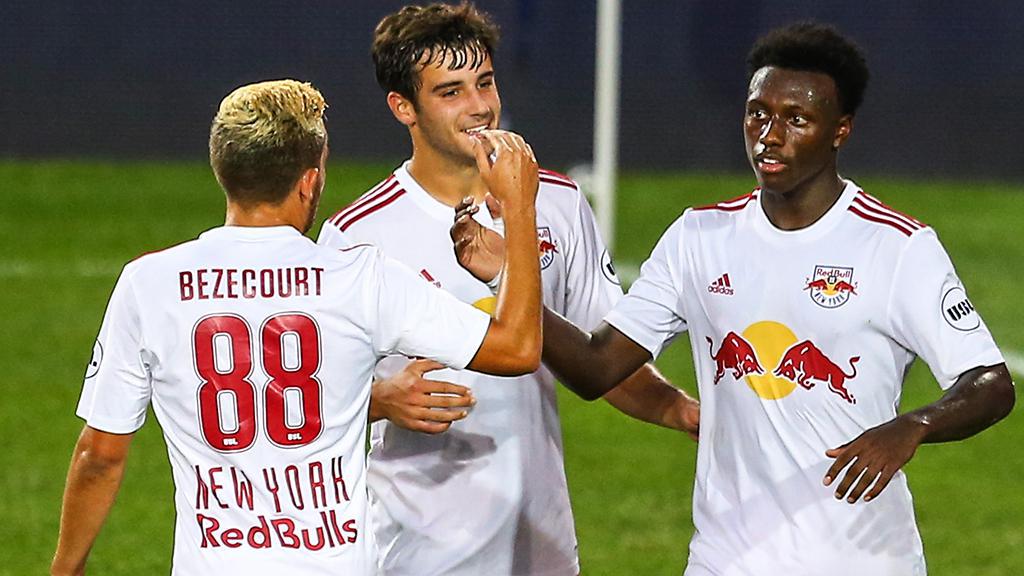 Momentum. The theory is, you want it. The feeling of being on top of your game as the playoffs kick off, the hopefulness that comes with the power of positive thinking. Some teams appear to have it going into the 2016 USL Cup Playoffs. Some teams, on the face of it, don’t. Let’s take a look.

- NEW YORK RED BULLS II: This shortlist list, of course, should start with the Red Bulls II, undefeated in their past 10 games, and winners of nine of them. A record-setting regular season behind them, New York’s plus-40 goal differential was the best in league history, another eye-catching stat that has set the Red Bulls II apart from most this season.

- SACRAMENTO REPUBLIC FC – Republic FC’s 11-game undefeated streak carried the side to the top of the Western Conference as all the other challengers at the start of September dropped games along the way. Sacramento has a certain steel at the back right now, and should have enough in attack to contend for a championship. The road begins against the hot-and-cold Orange County Blues FC. Which opponent will Republic FC be up against?

- SWOPE PARK RANGERS – The Rangers aren’t the dark horse of previous seasons – which saw a No. 5-seed or lower reach the championship game each of the past four years – thanks to their No. 4 seed, but with six wins out of their past seven games, Swope Park has hit its stride in impressive fashion. Will that be enough to mount the sort of run their first playoff opponent, the LA Galaxy II, made a season ago?

- RICHMOND KICKERS: A 10-game undefeated streak pushed the Kickers up the Eastern Conference standings quickly, but the side ended the season meekly, going winless in its last five games, and losing three of the past four. A perennial playoff contender, the Kickers will need to find a big turnaround if they’re to spring an upset on the road against Louisville next Sunday.

- OKC ENERGY FC: It wasn’t so long ago Energy FC appeared to be in contention for the Western Conference’s top spot. With only two wins over the past two months of the season, and both of those against Tulsa Roughnecks FC, it’s fair to say things haven’t shook out the way they were expecting. A trip to South Texas to face RGVFC kicks off the playoffs for the No. 7 seed. Will the team we thought this could be show up against the Toros?

- VANCOUVER WHITECAPS FC 2: WFC2 ended the regular season with a win, but that only served to mask what was a difficult final two months of the season for the young ‘Caps. Going 2-5-3 in the final 10 games of the season dropped WFC2 from first in the West to the No. 6 seed, and a visit to Colorado Springs in the conference quarterfinals. The potential this side possesses was evident in its 10-game undefeated streak to start the season. Can it rediscover that form in time?

2. Sacramento Republic FC (Previous: 4)
Last Week: W 4-0 at Tulsa Roughnecks FC
Republic FC extended its undefeated streak to 11 games to close the regular season with a comprehensive victory against Tulsa, which also saw Cameron Iwasa set a single-season club record with his 12th goal. The No. 1 seed in the West secured, Sacramento will now begin the pursuit of a second championship at home to Orange County.

3. Louisville City FC (Previous: 2)
Last Week: D 1-1 vs. Charlotte Independence
Saturday’s game didn’t mean much in the grand scheme of things for Louisville, but the side will be happy to have earned a draw against Charlotte to end the regular season in a relatively positive fashion. A visit from the Richmond Kickers to open the postseason arrives next, with the hosts hopeful of a repeat performance of their recent 2-0 win at Slugger Field.

4. Rio Grande Valley FC (Previous: 5)
Last Week: W 3-0 vs. San Antonio FC
The Toros ended the regular season in positive style, as their three goals in the final 15 minutes allowed the side to grab the No. 2 seed in the West, and give it the chance to host a pair of postseason encounters. RGVFC has only lost twice on home turf all season, and teams will not relish visiting South Texas and a very dangerous team needing to find a way to win on the road to advance.

5. FC Cincinnati (Previous: 6)
Last Week: W 1-0 at Pittsburgh Riverhounds
Sean Okoli grabbed the USL Golden Boot with his finish from the penalty spot against the Riverhounds as Cincinnati ended the regular season on a positive note, but the side will likely want to see more sharpness in front of goal as the playoffs kick off. Three consecutive shutouts entering the playoffs are definitely a positive, though, as the Charleston Battery visit Nippert Stadium.

6. Rochester Rhinos (Previous: 7)
Last Week: W 1-0 vs. Toronto FC II
The Rhinos took advantage of the Charlotte Independence’s draw in Louisville to claim home-field advantage for their meeting on Saturday in the Eastern Conference Quarterfinals of the 2016 USL Cup Playoffs. With a nine-game undefeated streak heading in, the Rhinos have played well down the stretch. Will it be well enough to make a run at defending their title?

7. Portland Timbers 2 (Previous: 8)
Last Week: W 3-2 vs. Arizona United SC
Five wins in a row to end the season for Portland, and still it wasn’t quite enough to find a way into the playoffs. T2 will take the consolation that the side looked remarkably impressive down the stretch, and Villyan Bijev’s Assists Champion title, with it as a silver lining, and hope to pick up where it left off when the 2017 season gets underway.

8. Swope Park Rangers (Previous: 9)
Last Week: W 3-1 at Tulsa Roughnecks FC; W 2-0 vs. Seattle Sounders FC 2
The Rangers might be hitting their peak at just the right moment to make a playoff run, with four consecutive victories and six in their last seven games after their two wins in the past week. The LA Galaxy II will be a strong test to open the playoffs on Friday night, though, coming in on a solid run of form themselves.

9. Colorado Springs Switchbacks FC (Previous: 3)
Last Week: L 4-0 at Orange County Blues FC
The Switchbacks had the chance to finish top of the Western Conference in front of them, but couldn’t find a way to overcome Orange County on the road, making their road in the postseason that much harder. Now, instead of having to welcome sides to Switchbacks Stadium, Colorado Springs could have to win in both South Texas and Sacramento to get a shot at the title, and that’s with a clash against a Vancouver side that earned a draw on the road earlier this season before those two potential games.

10. Charlotte Independence (Previous: NR)
Last Week: D 1-1 at Louisville City FC
Charlotte couldn’t quite take a victory on the road to earn a home playoff contest, but the side will take some confidence from a strong road performance against the No. 2 seed in the postseason. The Independence will now head to Rochester, and look for some revenge after the Rhinos imparted a 1-0 win at Ramblewood Stadium two weeks ago that led to the side’s slide out of the East’s top four.