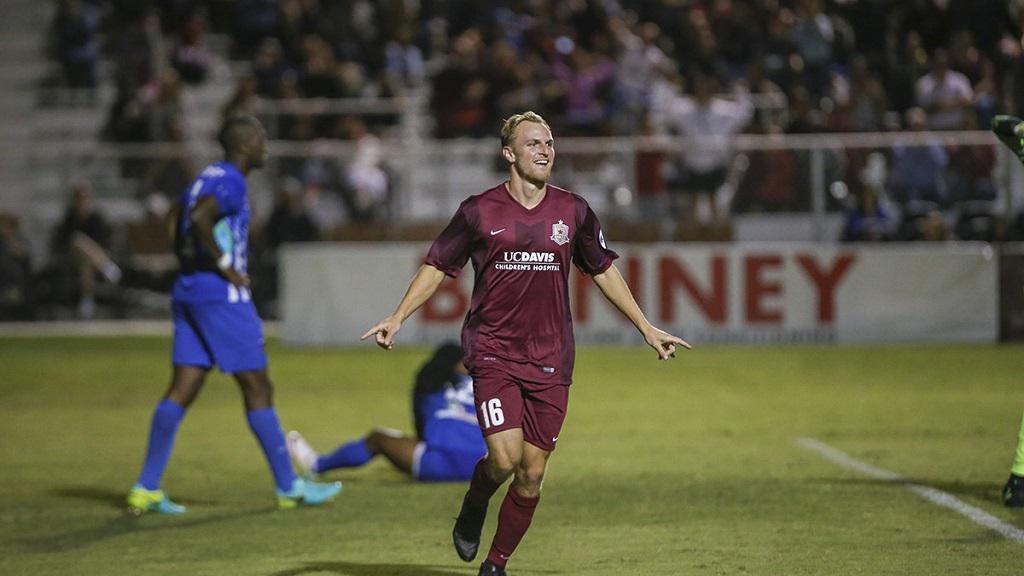 Sacramento Republic FC has undergone its share of adjustments this season, and while not every element has been seamless, the team’s depth and versatility have certainly made this campaign as successful as any other.

For a third straight season, Sacramento is headed to the postseason as the club clinched a berth following a 2-1 victory against Orange County Blues FC on Saturday at sold-out Bonney Field. Sacramento, which leads the Western Conference, is the first club among this group to earn a 2016 USL Playoffs berth.

The night had a unique feel to it as a number of newcomers and first accomplishments from players already well connected to the Sacramento landscape peppered the comeback victory.

Midfielder Matt LaGrassa, a Sacramento-area native and longtime standout in the PDL for the Des Moines Menace and Ventura County Fusion, notched his first professional goal for his hometown club and was subbed off to a standing ovation.

Then there was defender Elliott Hord, who earned his first assist in his second start, setting up Saturday’s game-winner by Harry Williams in the 85th minute. The UC Davis alum and former Fresno Fuego defender signed with the club in mid-August and has had a whirlwind stretch, rising to the occasion this weekend.

“About a month ago, I wasn’t here. I was going to wake up in Fresno today and work a camp for the Fuego,” Hord said after the match. “In one day, it’s crazy how fast things can change. The staff gave me an opportunity. I took advantage of it. It’s a great feeling to help this team in any way possible, whether it’s an assist or just defending or coming off the bench. It really doesn’t matter. I’m here for the team.”

Hord and the defense had their work cut out for them against an Orange County side that built some confidence during the duration of the opening half to come away with a one-goal lead through Didier Crettenand’s free kick strike in first-half stoppage time.

LaGrassa’s tally turned the tide in the 48th minute, and on the defensive end the squad kept Orange County off the score sheet for the second half.

“When we changed the tactic, we looked dangerous,” said Republic FC Head Coach and Technical Director Paul Buckle. “You’ve seen as of late, us play across the back and out, but they had players in pockets. If they have players there, then they can’t have players protecting their back line. So in the second half, we came in looking to beat those traps, and conceding before half woke us up.”

Sacramento (13-6-8, 47 points) is trying to hold off a strong Rio Grande Valley FC side (12-5-9, 45 points) for the top spot in the West. While the year hasn’t been smooth sailing, Buckle takes some satisfaction in finding the pieces that can get the job done.

Hord is the latest example of such a case, and Buckle has been pleasantly surprised with his effort in particular.

“He did very, very well in training, and it’s almost like you want to ignore it because you think, surely he can’t be good enough to come in this quick,” Buckle said of Hord’s transition. “But in the end, the boy did so well. I thought, why not play him? I feel I got it right. He’s got it right by doing what he’s doing, and I’ve got it right by playing him.

“He played very well. He punches his weight, and he showed tonight that he’s a very good defender.”